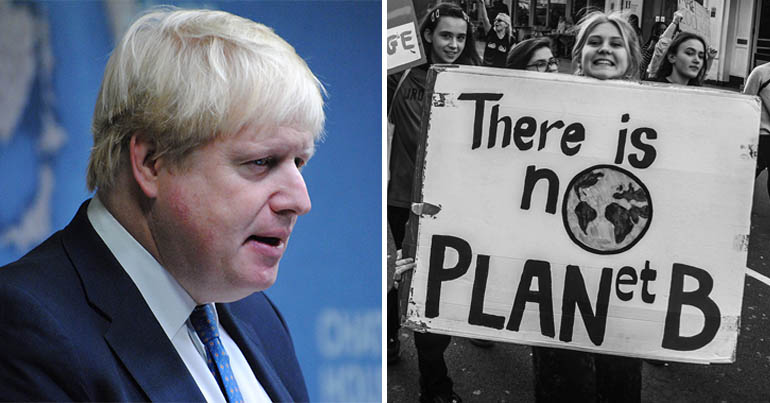 New analysis of the leaked trade talk papers shows that climate change was off the table in discussions with the US. And the reasons behind it hint at why Boris Johnson has refused to appear on Channel 4‘s climate debate.

Social justice group Global Justice Now (GJN) published its analysis of the secret trade talks between the Tories and the US government. And while much popular focus has been on what it means for the NHS, GJN revealed that we should be just as concerned about what it means for the climate.

Papers for the second working group show that the US would not discuss climate breakdown in any trade negotiations with the UK. The paper said the:

UK inquired about the possibility of including reference to climate change in a future UK-US trade agreement given that the UK has a strong historical stance on climate change and pushed strongly for the Paris Agreement. … US responded emphatically that climate change is the most political (sensitive) question for the US, stating it is a ‘lightning rod issue’, mentioning that as of 2015, USTR are bound by Congress not to include mention of greenhouse gas emission reductions in trade agreements. US stated this ban would not be lifted anytime soon.

GJN highlighted the danger this poses to the UK. The group said that trade deals such as the one the UK would seek with the US after Brexit:

As a result, it pointed out that climate breakdown must be a priority for government, saying:

In the face of the climate emergency it should be an integral factor in any government discussions.

This revelation gives a new dimension to Johnson’s refusal to appear in Channel 4‘s climate debate on 28 November.

Tonight, the broadcaster will air a debate between all opposition leaders on the climate crisis. However, the prime minister has refused to take part from the outset. As a result, Channel 4 will apparently ‘empty-chair‘ him on the broadcast. A party memo said Johnson refused to take part because he doesn’t want environmental issues “siloed”. But the leaked trade talk documents suggest Johnson may have ulterior motives for not appearing.

Despite the party’s manifesto claiming “free markets… can protect the planet”, it’s clear that one of the UK’s most important partners would shut down factoring carbon emissions into a trade partnership. On 17 November, climate scientists called the Conservative government out for its poor environmental record. They described the party’s approach as copying that of right-wing US politicians. And the latest leaks add weight to this.

Climate issues are one of the most important election issues. So it’s no surprise then that Johnson is doing all he can to avoid talking about this issue live on air.