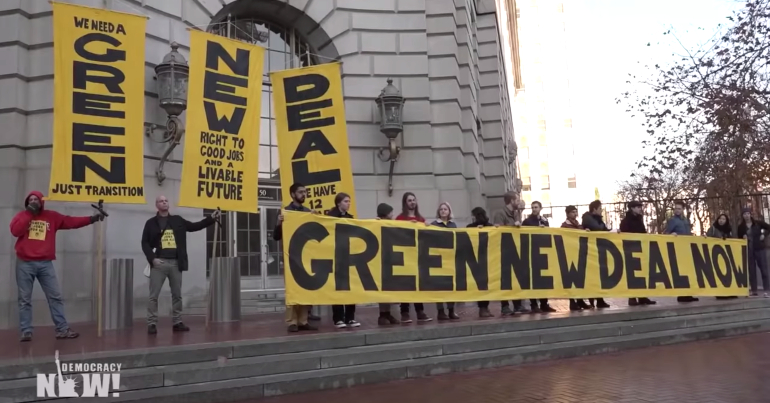 2020 is a pivotal year for humanity. It’s the year where the outcome of the US presidential election could either accelerate the world towards climate catastrophe with Donald Trump or embrace the opportunity of a radical Green New Deal with Bernie Sanders. It’s also the year that scientists agree global emissions need to peak, before being rapidly slashed by at least half within the next decade; and the year in which crucial UN international climate change talks – the COP26 – take place in Glasgow. This is the deadline under the Paris Climate Agreement for countries to increase their targets to cut carbon emissions to keep global warming below 1.5°C.

The stakes couldn’t be higher. A Trump victory would see a further ramp-up in fossil-fuel extraction in the US and the advance of Trump’s axis of climate-crisis denial that he has been building around the world. Since Trump announced the US would withdraw from the Paris Agreement in June 2017, the world’s most powerful climate-crisis denier has gathered allies behind his project to derail the international fight to save the planet – including Saudi Arabia, Australia, and Brazil.

If Trump is re-elected on 3 November, days ahead of the vital UN climate talks, there is a great danger that they will be sabotaged by the US and its right-wing allies. With Britain hosting the event, Trump will have a loyal ally in Boris Johnson chairing the proceedings.

The most serious resistance to Trump is the global movement for a Green New Deal – which demands that large-scale public investment is directed towards solving the climate crisis. This banner of a Green New Deal is being taken up by progressive forces across the planet, with Bernie Sanders leading the way in the US.

US fossil-fuel extraction expands under Trump

He represents the powerful interests of the fossil-fuel industry and has supported the expansion of this polluting sector of the economy. The US has become the world’s number one producer of oil and gas as a result of the ‘fracking revolution‘. The US Energy Information Administration forecasts that US crude oil production will reach a new record high in 2020 and 2021.

As the biggest all-time greenhouse-gas emitter on the planet by a huge distance, the US has a historic responsibility to make the biggest and quickest cuts in carbon emissions. While the US pledges made by Barack Obama in the Paris Agreement were themselves insufficient, and if implemented would lead to more than 2°C of warming, Trump’s decision to abandon the Paris Agreement altogether and discard Obama’s Clean Power Plan puts the US on course to contribute to catastrophic levels of global warming.

Trump’s global right-wing offensive scored three important successes during 2018 and 2019, which have dire consequences for the struggle to stop climate catastrophe. US intervention in Brazil, Bolivia, and Britain has facilitated the coming to office of governments that will push the struggle to tackle the climate emergency backwards, just when the world needs greater action.

In Brazil, US intervention paved the way for the election of far-right politician Jair Bolsonaro in October 2018. The environmental impact of Bolsonaro’s first year in office has been devastating. The immense capacity of the Amazon Rainforest, the ‘lungs of the planet’, to suck carbon out of the atmosphere is being destroyed. Deforestation increased by 30% in the 12 months up to July 2019. During the month of August 2019, when fires raged throughout the Brazilian Amazon, the rate of deforestation was 222% higher than the previous August. This devastation is a direct consequence of Bolsonaro’s aggressive support for the expansion of ranching and mining in the Amazon and dismantling of environmental protections.

Bolsonaro would not have become Brazil’s president without the intervention of the US. Leftist ex-president Lula da Silva was the favourite to win Brazil’s presidential election in 2018. He had a commanding lead in all the opinion polls throughout the year running up to the election. However, Brazil’s Superior Electoral Court barred him from competing in the election in September 2018. This ruling came after Lula was jailed in April 2018 for “undetermined acts of corruption” by Brazilian judge Sérgio Moro, who was working closely with the US Department of Justice, in a clearly politically-motivated attack on the left’s main candidate for president. Lula has since been released from prison due to a lack of evidence, while Moro was appointed to serve in Bolsonaro’s government as justice minister.

In Bolivia, the US government backed a coup which overthrew the country’s democratically elected president Evo Morales in November 2019 and installed a far-right military dictatorship in its place. This US intervention had the consequence of removing one of the world’s foremost progressive leaders in the fight against climate breakdown. Morales was transforming Bolivia’s economy through massive state investment in sustainable industries as part of a plan to diversify the economy and reduce dependence on raw materials and fossil-fuel exports. In 2016, for example, Bolivia spent more than any other country in the world on renewables as a percentage of its GDP.

The UK’s general election in December 2019, meanwhile, saw the election of Boris Johnson, who was openly supported by Trump. Through a hard Brexit, Trump and Johnson appear to be planning a huge assault which will include the destruction of environmental protections as the Tory government pushes for a trade deal with the US, aiming to abandon alignment with EU regulations which are much tougher than Washington’s.

Johnson’s orientation seems to be the complete subordination of Britain to the US. On the climate crisis, Johnson will join Trump’s reactionary international alliance and is likely to play a direct role in attempting to sabotage progress at the COP26 in Glasgow later this year if Trump is re-elected US president.

For a Green New Deal

With the Democratic Party presidential primaries starting in February, the opportunity of a radical alternative to Trump’s climate-crisis denial is on the horizon.

Sanders has set out what’s needed. His ‘Green New Deal’ proposes a massive $16.3tn of public investment to usher in a green transformation of the US economy, with the goal of reaching 100% renewable energy for electricity and transportation by no later than 2030 and creating 20 million green jobs.

Mayors of some of the world’s biggest cities have also called for a Global Green New Deal. And as new British Labour MP Zarah Sultana put it in her brilliant maiden speech:

This is the urgent call of our times: an international Green New Deal to transition from disaster capitalism to a new society created on the principles of equality, freedom and justice.

The entire world needs to prioritise the fight to stop climate catastrophe. It must invest in an international Green New Deal. And it must confront the dangerous threat that Trump and his international axis of climate-crisis denial poses to the future of humanity.