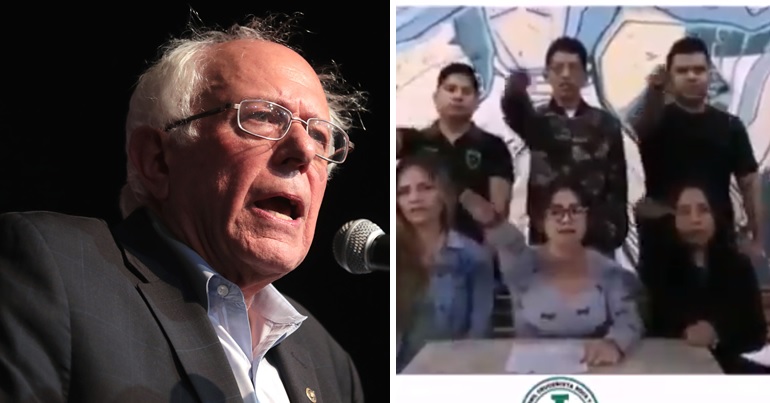 For almost 14 years, Bolivia’s government has been an example of how democratic socialism can be successful. And precisely for that reason, the US and its local allies have conspired to overthrow it. Fortunately, democratic socialists elsewhere are calling out the current coup – just as it’s revealing its fascist face.

US presidential hopeful Bernie Sanders, for example, has openly called for a return to democracy in Bolivia:

I am very concerned about what appears to be a coup in Bolivia, where the military, after weeks of political unrest, intervened to remove President Evo Morales. The U.S. must call for an end to violence and support Bolivia’s democratic institutions.

The people of Bolivia deserve free, fair, and peaceful elections – not violent seizures of power.

There's a word for the President of a country being pushed out by the military. It’s called a coup.

When Mexican Foreign Minister @m_ebrard labeled this coup “a step backwards for the entire region,” he was correct. We commend the Mexican government for its continued solidarity with the people of Bolivia 🇧🇴 #NoCoupInBolivia#ElMundoConEvohttps://t.co/ORLmmwVDQC

In the UK, meanwhile, Jeremy Corbyn led the way in condemning the coup.

Morales was the first member of Bolivia’s large Indigenous population to become president, and he remains deeply popular among many Bolivians. While no government is perfect, many people considered Morales’s administration to be perhaps the “most successful” left-of-centre government in Latin America – and perhaps even the world. As The Canary previously reported, his government lifted “millions of people out of poverty” and oversaw very impressive economic growth despite “deep economic crises and an economic slowdown elsewhere in Latin America”. For these reasons, Bolivians recently re-elected his government (though with a reduced majority).

Because Morales supports nationalisation and opposes the terror of US imperialism, he has been very unpopular in Washington. And as the coup took shape in Bolivia, intellectuals Noam Chomsky and Vijay Prashad pointed firmly to US involvement. Many other analysts said the same:

THREAD: If you haven't been following the situation in Bolivia here's a rundown. Briefly, the OAS, an emboldened opposition (which clearly is not the most popular party in the country), the media, and the Trump admin ousted a successful leftist leader. For the longer story:

Since 2006, Bolivia has been a beacon to the world of what can be achieved by democratic socialism that rejects imperial ideologies and institutions like the IMF/World Bank.

Evo and movement behind him made Bolivia independent for 1st time in 500 years. That cannot be tolerated. https://t.co/nYaqvlnqbR

US Domestic Policy:
•How dare Latin American refugees come to USA—they should solve their own Govt problems back home!

The fascist face of the coup

The Grayzone has done an in-depth report on the fascist links of one of the coup’s key figures:

He has courted support from Colombia, Brazil, and the US-backed Venezuela coup regime

These are the people who overthrew elected President Evo Morales. https://t.co/gFMyfjsi2p pic.twitter.com/GvvMfL21UZ

Before he leaves, he declares "Pachamama", an Andean indigenous goddess, "will never return to the Palace." He then says, "Bolivia belongs to Christ."https://t.co/jvw4RK8XFD

The ugly face of Latin American right is on full show today in Bolivia as demonstrators burn the indigenous flag in celebration of a successful coup against the country's only indigenous President. https://t.co/bQdRlQr0xs

The Bolivian constitution fully recognizes Indigenous peoples and establishes that the country is plurinational… The coup perpetrators fantasize to erase diversity just like this: pic.twitter.com/GS7zn05Sjl

Author Naomi Klein stressed how this behaviour shows the dark alliance between fascists and corporatists:

What is happening in Bolivia is terrifying and part of a much larger resurgence of the far right, with violence against indigenous people at its center. This is bigger than one politician: it's about overthrowing people power and clearing the path for unfettered extraction https://t.co/HqXREwe8Nw

There were also reports of authorities and right-wing mobs rounding up left-wingers:

Bolivian security forces and racist right-wing mobs are going door-to-door, rounding up and beating Indigenous people and leftists in impoverished neighbourhoods in La Paz as they try to literally smoke supporters of @evoespueblo out. #ThisIsACoup #ElGolpeDeEstadoEnBolivia pic.twitter.com/gK70neZ9pc

Armed Bolivian far-right paramilitaries and police in Cochabamba patrolling the streets, hunting leftists and saying things like: "We are going to kill them!"

If we want to stop the US / fascist alliance, we must denounce this disgusting coup

Those who call themselves progressive must speak out NOW. The bloody history of US crushing democracy in Latin America has gone on far too long to feign ignorance! Stand up & condemn the coup in #Bolivia NOW – or be complicit. https://t.co/4XJXsEAOKh

Indeed, anyone who believes in democracy, social justice, and human rights must stand up now in condemnation against Bolivia’s fascist coup.

It is not OK that, in the 21st century, rich and powerful elites in the US and elsewhere can still get rid of governments just because they dare to serve the interests of working people. And we must raise our voices as loud as we can if we want that to change.