As Sajid Javid chickens out of TV debate, John McDonnell throws down the gauntlet - Canary 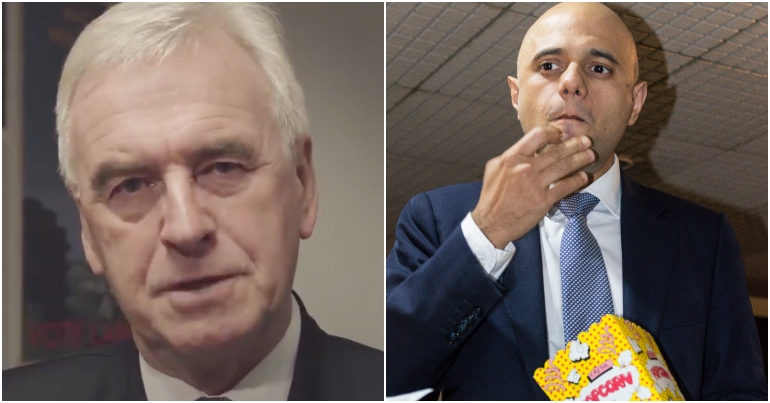 The battle of the potential chancellors was supposed to commence this weekend with Sajid Javid and John McDonnell going head-to-head on Channel 4. But Javid pulled out despite previously saying he was happy to debate McDonnell.

So McDonnell’s thrown down the gauntlet, saying:

So come on chancellor, come and debate the real truth of Labour’s policies.

It is perhaps this “real truth” that Javid is scared of. After all, he’s been busy tweeting completely false statements about Labour’s tax plans:

Corbyn’s Labour is planning a reckless spending spree which we will all have to pay for. Not only an eye-watering rise in borrowing and debt, but a need to HIKE UP TAXES BY £2,400 per person per year. Learn more about Corbyn’s tax bombshell at https://t.co/l52KpulEoy

So, as McDonnell states in the video, he ‘knows why’ Javid is running away:

because he’s terrified of debating the truth about Labour’s policies. He’s been putting forward silly, fictitious, fake news figures that we will rip apart.

Because as McDonnell clearly sets out, the vast majority of working people will not pay more taxes:

And yes, only the top 5% of earners will pay a bit more income tax. 95% of our people will not pay any increase in income tax, or VAT, or National Insurance.

So rather than facing a cool and calm McDonnell, Javid is running scared, seemingly preferring to put out what McDonnell calls “silly fictitious, fake news figures” on Twitter.

So register to vote. The deadline is 26 November. Encourage, check, cajole, and ensure that everyone you know is registered to vote. And come 12 December, let’s give our country the Christmas present we all deserve – a Labour government that will save our NHS, and invest in all our futures.