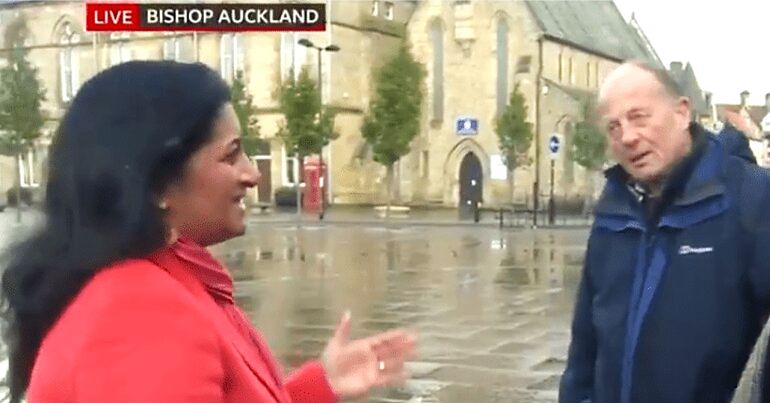 The BBC presenter responded with laughter. But it’s unclear that this farmer was joking when he said the prime minister “should be sent to jail”.

The BBC asked the man what his fellow farmers were thinking about Brexit and the election. He said:

There’s the odd one tempted by the Leave side. The ones that I know that voted to leave have… come back. It’s like a turkey voting for Christmas isn’t it… I’ve yet to see anybody put the solid argument up for leaving Europe.

In the event of a no-deal Brexit under Johnson, one report says 50% of UK farms could go under.

Selling off the NHS

On the BBC, the man continued:

All the things they put forward, none of them are as good as staying in Europe… You’ve got to trade with your local neighbours. Donald Trump is wishing to take over the health service. Boris Johnson will go to negotiate with Donald as a little boy, pat him on the head… Boris Johnson has stuffed the DUP. He went over there, gave empty promises, and the day after he sold them. The Irish problem – he can’t sort it

In June 2019, Trump said that the NHS would be “on the table” in a future trade deal between the US and the UK. That means private US healthcare companies profiting from our sick relatives, friends, and community members.

Johnson also has a history of following Trump’s lead. While foreign secretary, he reversed his position on Syria four times to mirror Trump.

Rounding off, the farmer said:

He promised £350m… he knew that was a lie. He lied to the British public and he is perpetrating this lie now. He should be sent to jail. He should be sued.

On top of the ‘£350m-a-week lie’, Johnson was literally arguing for Remain in February 2016 – four months before the referendum. He switched positions because it worked better for his push to become prime minister. This farmer is right. Johnson is a dangerous chancer who should probably be in jail.