Boris Johnson lays out his plan to wreck the NHS, in 40 seconds - Canary Workers’ Co-op 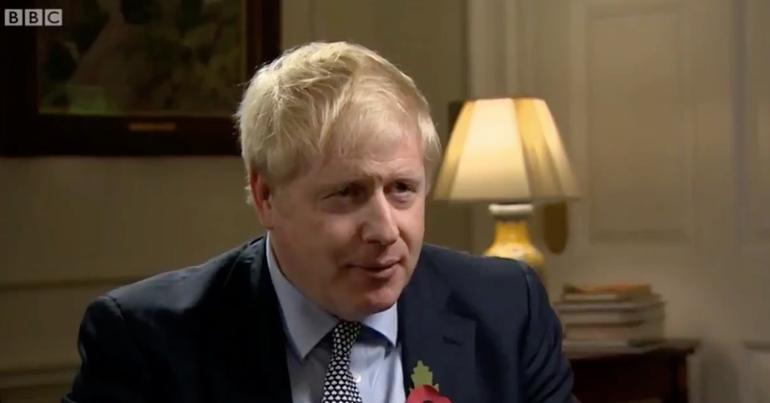 Healthcare is the single biggest issue for voters this election, bar Brexit. In 40 seconds of footage that should end Boris Johnson’s campaign, he seems to have forgotten that. Asked not once, but twice, if he will rule out selling off more of our NHS, he refuses to say yes.

The 40 seconds that should end Boris Johnson’s campaign

These are the most important 40 seconds of this entire General Election. Twice the BBC asked Boris Johnson if he would rule out more NHS privatisation. Twice he refused to say yes. pic.twitter.com/EuJ11wZexT

BBC political editor Laura Kuenssberg asks Johnson twice if he will rule out further privatisation of the NHS. In the first response, he replies that he is providing the NHS with £34bn. He does not state what period the funding will apply to, or the split between capital and revenue. But this is immaterial, because his claim seems unlikely to be true. Research by The King’s Fund shows the NHS has been consistently under-funded for the last decade. And the latest Tory spending plans don’t even make a dent in that:

In the September 2019 Spending Round, the government announced further increases to budgets for capital investment, public health and the education and training of the NHS workforce. Even with these increases, the total Department of Health and Social Care budget will rise by 2.9 per cent between 2019/20 and 2020/21, which is less than both the long-run average and the rises that NHS England’s mandate services will see.

The stealth privatisation of the NHS

Successive governments have been privatising the NHS by stealth in two ways.

The first is how government borrows money for the NHS. Private Finance Initiatives (PFI) are a means of borrowing private money to fund government projects. They are incredibly expensive; the equivalent of buying a house with your credit card rather than a mortgage. According to the IPPR think tank, the £13bn of PFI lending secured for the NHS will cost us an eye-watering £80bn. The same funding borrowed through the gilt market would have cost only a fraction of that. That money could have been spent on patients, medicine, technology, and staff. But now, it’s going to profit private lenders instead. Why would the government do this? First, because PFI lending is off the books, meaning it doesn’t have to be reported as borrowing. And second, corruption. We have a revolving door between government and the private sector. Take New Labour home secretary John Reid. He privatised much of the Home Office to G4S, only to leave government and become Group Consultant for (you guessed it) G4S.

The second is the NHS being reduced to a number of private companies receiving payment to run NHS services with public money. Again, this is a way for private companies to siphon public money, with the NHS ending up as little more than a brand name on an entirely privatised service. The problem is that a company with private shareholders and a profit motive to satisfy cannot run at a lower cost than a public service.

It’s as simple as this: imagine you and I are given £100 to spend on health. I get to spend it only on whatever health needs I have, but you have to hand off a percentage to a bank (lending), some shareholders (dividends), and you must also declare a profit somehow at the end of it all. Which one of us gets to dedicate more of their £100 to actual health? Me. That’s the difference between running NHS services that are both publicly funded and publicly managed, and not. Everything from catering to cleaning services is now outsourced in most hospitals.

Since 2010, more than 15,000 beds have been cut from the NHS. Meanwhile, hospitals are crumbling because the Tories have cut around £4.3bn from repair and equipment funds since 2014. And the financial havoc wreaked on NHS Trusts was clear from research conducted by The King’s Fund:

In 2010/11, just 5 per cent of these providers overspent their annual budgets. By 2015/16, two-thirds of trusts (66 per cent) were in deficit as the slowdown in NHS funding took its toll.

What this all means is sick and dying people getting delayed or inadequate treatment. And when the service fails, government uses it as an excuse to do more privatisation, not less. The private sector is portrayed as riding to the rescue of the NHS. And that’s how the number of NHS patients having surgery in private hospitals has almost trebled since 2010.

By the time most people realise this privatisation by stealth is happening, it could be too late. There may not be an NHS left to save. And that’s why Johnson won’t promise to stop it. Quite the opposite. Johnson seemingly plans to accelerate it. We know, for example, that government officials have already begun post-Brexit trade talks with US pharmaceutical companies to further burden the public purse.

C4 Dispatches reveals Trump & US drugs giants want to force the NHS to pay £27Billion a year extra (£500,000 a week) for US medicines & how UK Trade officials have already had 11 secret talks with their US counterparts & with US Pharmaceutical companies. https://t.co/0leiLvZ7hH

The Liberal Democrats, meanwhile, were in the coalition government throughout the time most of these decisions were made. And as recently as October 2019, they abstained on a Labour a motion to protect the NHS from further privatisation.

By contrast, Labour has promised to scrap NHS privatisation and return to a publicly-funded, publicly-run health service. Shadow health secretary Jon Ashworth has pledged a fully-costed £26bn yearly cash injection to the NHS, along with a 10-point plan to reverse the impacts of austerity. The plans will return the NHS to the public.

That’s the choice people are making when they vote on 12 December. The NHS: to be, or not to be.