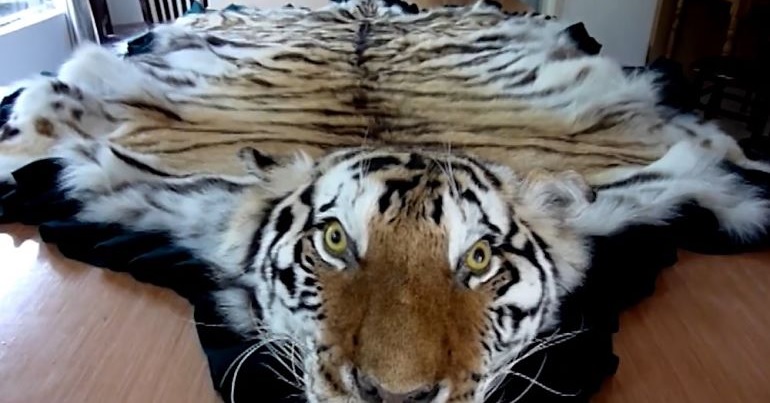 Many of the world’s businesses and workers have taken a financial hit due to the coronavirus (Covid-19) pandemic. Others are thriving, particularly those that provide life’s essentials.

But one “gruesome” trade is cashing in on the crisis too. As the Environmental Investigation Agency (EIA) has revealed, a trader in Vietnam is marketing ‘glue’ made from tigers as a way to “invest in health” amid “the haunting pandemic”. And this trader is by no means the only one exploiting the pandemic to sell medicines containing wildlife.

Coronavirus is widely believed to have its seeds in humanity’s use (and abuse) of wildlife. Continuing that use and abuse is not the way forward.

This Vietnamese trader is offering his homemade tiger bone “glue” via his social media account, complete with images and harrowing video footage of a tiger being butchered and the bones being boiled down…

He’s one of potentially more than 100 tiger keepers and butchers in Vietnam who raise tiger cubs that have been trafficked from captive breeding facilities in Thailand and Laos.

Once the animals are mature, the traders kill them and boil their bones to make the ‘glue’: a paste that people can add to tea and wine. Other body parts – such as the skin, teeth and claws – are made into decorative items for sale.

The EIA has also revealed that some traders are using medical guidance from the Chinese government to market their products containing rhinos. In January, the government released recommendations for treating coronavirus, which included one called ‘Angong Niuhuang Wan’.

China and Laos are parties to the Convention on International Trade in Endangered Species of Wild Fauna and Flora (CITES). And the commercial trade in rhino parts is prohibited under CITES.

But traders in China and Laos are linking to this government advice in marketing their own Angong Niuhuang Wan, apparently made in North Korea, which lists rhino horn and musk in the ingredients. The EIA says it has previously reported these sellers to both national and intergovernmental authorities. It argued:

Straight from the top

Following the coronavirus outbreak, the Chinese government temporarily banned the consumption of most wildlife in food. The closure of wildlife farms across the country due to the ban revealed the vast scale of the industry, with some 20,000 farms shuttered. China responded to the outbreak with this prohibition because it’s widely thought that the new disease originated in wildlife.

But the ban doesn’t include consumption of wildlife in Traditional Chinese Medicine (TCM). In fact, in its advice in March on diagnosis and treatment for coronavirus, China’s National Health Commission itself recommended a product with bear bile in it.

To stave off the threat of further pandemics, authorities around the world – particularly in Asia where there is a large traditional medicine market – need to bring in a total ban on wildlife consumption. The consumption of any wild animal, in any form, is a risk. As the Environmental Justice Foundation’s co-founder and executive director Steve Trent recently wrote in the Revelator:

it’s the intermixing of multiple species that occurs in the wildlife trade — species that don’t normally mix closely in the wild — that likely forms the pool for virus transmission, possibly with mutations from one species to another.

Trent also argued that, as we over-exploit and deplete each wild species for consumption, we then move on to another. He said this creates “the potential for novel viruses” to emerge.

Be free of us

The future health of humanity clearly depends on ending the wildlife trade. But it will also give the targeted species a chance at survival too. There were only around 27,000 rhinos left in the world in 2019, according to the International Rhino Foundation. Meanwhile, the WWF says there’s only around 3,900 wild tigers left around the globe.

Featured image via the EIA/YouTube