Phasing out coal is not just about the climate emergency. It's also about community. - The Canary 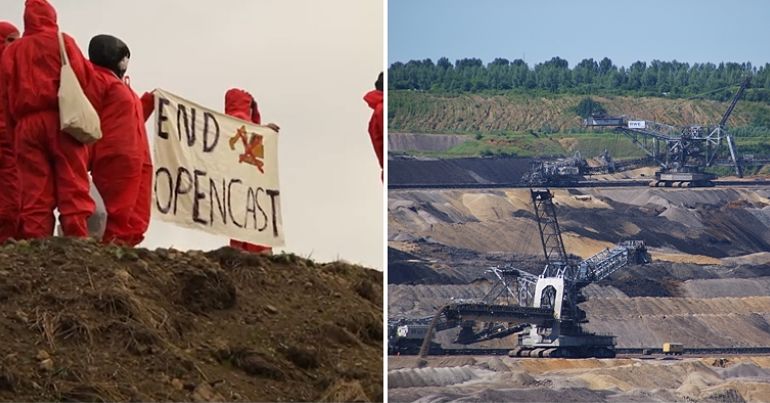 As The Canary reported recently, Germany plans to phase out coal by 2038. Environmentalists say this target is too late. On 4 February this year, the UK government announced plans to bring forward its deadline to phase out coal to 1 October 2024. The UK had planned to do so by 2025.

Despite this apparent wind down for coal, both countries still seem fully engaged in major opencast coal mining projects. And these projects are underway despite strong resistance. Campaigners are determined to fight, not just for these sites, but to fight against environmental destruction and for a better world to live in. And their efforts are being documented in an upcoming film called Finite.

As reported by The Canary, the Banks Group is opencast mining in Pont Valley in County Durham. Meanwhile German energy company RWE is doing likewise in Hambach Forest in Germany. Pont Valley is an area of great beauty and wildlife. Hambach Forest is a remnant of a 12,000-year-old “primeval” forest.

The first failed attempt to mine Pont Valley began in 1974. And subsequent attempts to mine in 1986 and 2011 also failed. Finally, in 2015, the planning inspector granted permission to UK Coal to mine the area. Then, when UK Coal went bust, the Banks Group took over the licence to mine. Banks began extracting coal in May 2018.

The campaign against opencast mining in Pont Valley wasn’t new. Activists have resisted it in their area for over 30 years. And they say they’re resisting this opencast mine to:

say no to opencast mining, to say no to the prioritising of corporate profits… over human health, community health, planetary health. And we are also here because we want to show that you can live differently… rather than the capitalist principles that surround us in everyday life outside of spaces like this

When the Banks Group got the go-ahead to mine, campaigner Julia Triston said she was:

really devastated to see it actually happening after campaigning and passionately campaigning for so many years, decades, in fact. But because they’ve started it doesn’t mean that we’re giving in. You know, we’re still here to make our voices heard, we’re still here to… raise awareness, to cost Banks money, to inconvenience them, to make a point, and to say that we’re not going to go away.

Local campaigner June Davison spoke to The Canary. Davison lives less than 250 metres from the mine. She said she first opposed the mine as she knew “it would destroy the whole valley”. However, she and others were surprised that any company would get involved with such a project during a climate crisis.

She believes the area is worth defending because of its “history and landscape”. And because of its designation as an area of high landscape value on the edge of the Pennines. It’s a view, says Davison, that miners in the underground mines of days gone by used to appreciate when they’d come back up out of the mine.

On 1 July this year, campaigners had some good news. Banks Group’s plans to expand the mine were rejected by Durham County Councillors. Banks Group wanted to mine an extra 90,000 tonnes of coal. Anti-mine campaigners sent more than 6,000 objection letters.

The proposed community and national benefits do not outweigh the unacceptable impact on the environment and amenities of local communities.

We lost so much in our campaign against opencast mining, but we also gained so much. We showed what communities can achieve when we work together and fight back, and now our campaign is now part of a global movement. Our story in Finite can inspire other people to stand up against power and stop needless destruction like we have endured. We need change now more than ever.

She says the campaign has given her a greater sense of community. Both Davison and other campaigners stand in solidarity with the people in Dewley Hill and Druridge Bay. These communities are also battling against opencast mining. Additionally, Pont Valley campaigners have received tremendous solidarity from campaigners in Columbia and Hambach Forest in Germany.

Therefore the fight for climate justice is also a fight for a world without rulers and freedom from capitalistic forces.

Since the 1970s, RWE have been cutting down a section of the Hambach Forest every winter to expand the Hambach coal mine, which fuels their network of power stations – the biggest source of CO2 in Europe. Finite takes us inside the secretive community of activists who have lived in treehouses to defend the forest since 2012. Escalating protests recently led to the [stopping] of cutting the Hambach Forest, proving the growing strength of this social movement. However, campaigners argue that their message for action on climate breakdown is yet to break through, as the German government plans to keep the coal industry going until 2038 and have just opened a new coal power plant.

An activist called Clumsy lived in the Hambach Forest area for eight years. He also spoke to The Canary. Clumsy said he got involved in 2011 to raise awareness around Germany. Back then it was mainly just known locally but wider support soon grew. When the police evicted protesters in 2012 it took them 4 days to remove everybody. Yet the eviction didn’t stop the campaign because it grew again. Then when an eviction occurred in 2018, it took police 4 weeks to evict everybody.

And while the mining company has cut down a large chunk of the ancient forest, Clumsy says the federal government announced that no more cutting can take place. However, Clumsy warned this is something campaigners still occupying the trees will have to watch closely.

The Finite team has followed both sets of campaigners over the last three years. The film’s now fundraising for the final stages of production. On its website it claims:

Leading with authentic, personal stories captured during three years inside the climate movement, Finite is a raw and eye-opening account of what’s really happening in our ‘greenest’ areas.

Finite is about people taking direct action – making change themselves instead of appealing to a higher authority to do it. For me, making this film is direct action. I felt like the stories of resistance from the climate movement were not getting told beyond occasional news articles and rarely in depth, so I thought I’d do it myself

It’s about more than climate change

Both the UK and Germany are phasing out coal. So government and corporate attempts to expand these mining projects make precious little sense. The time for investment in renewable sources of energy is long overdue. But as these campaigns show, it’s about more than just energy, it’s about community. Maybe amidst the darkness of environmental chaos, hope emerges by showing how people can live and work together.