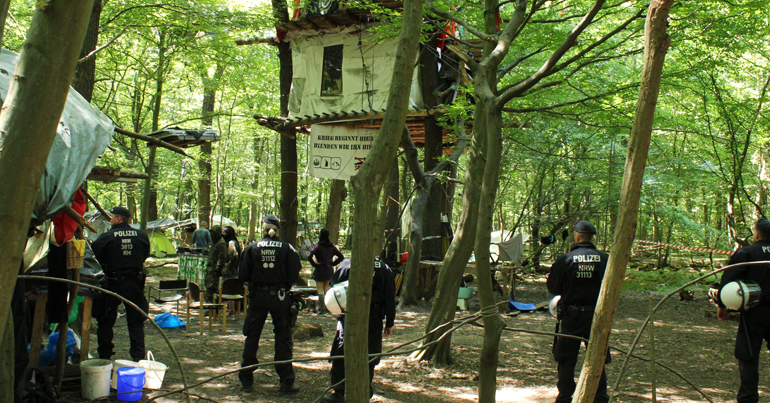 Each year, people living in Germany’s Hambach forest have faced heavy policing as they try to oppose the expansion of the country’s largest brown coal mine.

On 24 August, large numbers of police entered Hambach Forest to remove barricades set up by activists. This continued until 26 August, when a final car barricade was evicted, allowing police vehicles to enter the forest. And on 27 August, a second wave of police began arresting activists living at Meadow Camp on the edge of the forest. Police report that they were attacked with rocks and Molotov cocktails.

Hambach forest is 12,000 years old and home to 140 endangered species. Since 1978, approximately 90% of the forest’s original 13,590 acres has been felled. Today nearly 50 million tons of lignite – or brown coal – is mined every year. German utilities company RWE is Europe’s largest emitter of greenhouse gases and its Hambach mine allegedly creates one of Europe’s biggest sources of CO2 emissions.

Activists have occupied Hambach Forest since 2012 using tree houses, aerial walkways and barricades. The camps have faced heavy-handed police tactics before. But they believe the latest wave of police raids will evict all treehouses before this year’s tree cutting. The logging season runs between October and April.

Brown coal is a highly polluting form of fossil fuel. It is cheap but, when burned, emits more CO2 emissions per ton than other form of fossil fuel. It also supplies about 25% of Germany’s electricity. In June, the German government set up a board to end Germany’s reliance on coal. It aims to have a date by the end of 2018. But the board has also stated it won’t become involved in the fight over Hambach Forest’s logging.

Many countries across Europe have already pledged to end coal use by 2030 in order to meet environmental targets. The UK has agreed to phase it out by 2025. And this has been an important argument for campaigners against a new opencast coal mine in County Durham.

While governments have stated a desire to end coal use in the near future, their actions suggest a real lack of commitment. In Germany, RWE is tearing down ancient forest to expand one of Europe’s largest sources of CO2 pollution. And, in the UK, the government has approved plans for a major new opencast coal mine. Supporting activists fighting coal expansion remains essential to ending our reliance on fossil fuels.

– Check out the skillshare event planned at Hambach Forest between 22 September and 3 October.

– Coal Nee More, fighting the mine at County Durham, is also planning a skillshare camp between 5 and 9 September.

– Watch this video about why we must stop using coal.