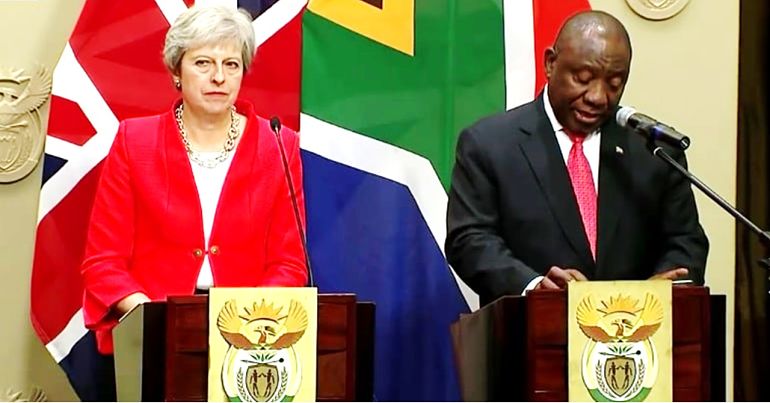 The prime minister is currently on a three-day trip to three African nations – South Africa, Nigeria, and Kenya – to promote post-Brexit trade. The media establishment will have us believe that Theresa May and the UK government help African nations. This is done through presenting statistics about UK aid and investment in isolation from the bigger picture. For example, the BBC reports that May has now:

pledged £4bn in support for African economies, to create jobs for young people.

She also pledged a “fundamental shift” in aid spending to focus on long-term economic and security challenges rather than short-term poverty reduction.

And where are these havens? Well, May’s government allows the largest network of tax havens through its overseas territories, facilitating a lot of this capital flight. Half of the 240,000 tax-dodging shell companies revealed in the Panama Papers were registered in the British Virgin Islands alone, for example.

Add such capital flight to repayments on debt and Western profit extraction, and the picture is staggering. Net resource outflows from developing countries end up totalling about $3tn per year, which is 24 times the amount they receive in aid.

In 2016, the Conservative government spent £13.4bn on overseas aid, with 51% going to countries in Africa. That only serves to reverse reality and paint Africa as indebted to Western nations like the UK, rather than the other way around.

May is actually in Africa to facilitate more Western plundering of the continent post-Brexit. As usual, she’s helping no one but the shareholders of multinational corporations.

– Read more Canary articles on Africa. And see more international reporting from us at The Canary Global.