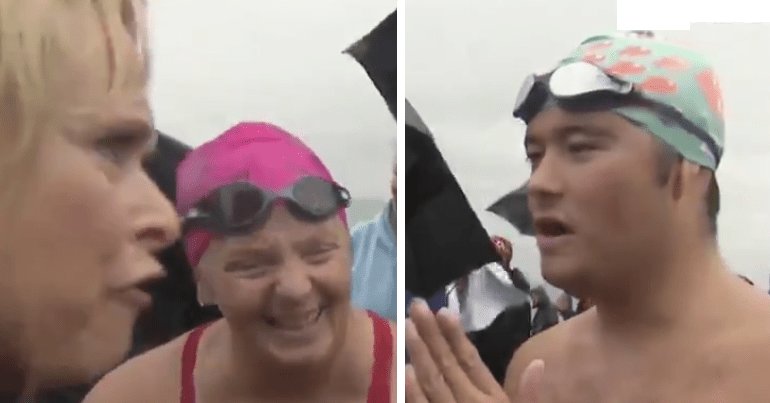 Sky News probably wouldn’t have spoken to a swimmer if they’d known he was going to talk about Jeremy Corbyn. The conservationist was getting involved in Lewis Pugh’s endurance swim, which is highlighting our polluted oceans. In March 2018, researchers discovered the “highest microplastic pollution” anywhere across the globe were in a river near Manchester.

“I’m very passionate about that”

Reporting on Pugh finishing the ‘long swim’, Sky talked to those who got involved themselves. And one man was about to speak his mind:

tfw when you're being interviewed about swimming but really want to talk about making @jeremycorbyn PM 💖🌹 pic.twitter.com/L1L0UZ10bR

I care really deeply about the trees in the Amazon rainforest and even the British forest… and I don’t like to see plastic polluting our oceans. I’m very passionate about that. I also care for the best that Jeremy Corbyn wins the next general election. But I won’t talk too much about politics right now.

Upon his comment about Corbyn, Sky’s reporter laughed and moved the mic away, saying:

You did it already…

What Corbyn plans to do for the environment

This is a man who voted for the fracking nightmare; for putting a tax created to discourage fossil fuels on clean, renewable energy; and against putting our climate targets in line with our international responsibilities.

Meanwhile, the conservationist Sky spoke to seemed to suggest there’s good environmental reasons to want Corbyn as prime minister. Labour plans to “take energy back into public ownership to deliver renewable energy” through:

Supporting the creation of publicly owned, locally accountable energy companies and co-operatives to rival existing private energy suppliers, with at least one in every region

That’s not old-school nationalisation as the media often report it, but competing with the “Big Six” through local co-operatives. Labour also plans to insulate millions of homes.

It’s unlikely Sky would’ve talked to that conservationist if they’d known he’d endorse Corbyn’s platform live on air. Well done to him for speaking his mind.

– Check out Surfers Against Sewage, taking action to clean up the seas.