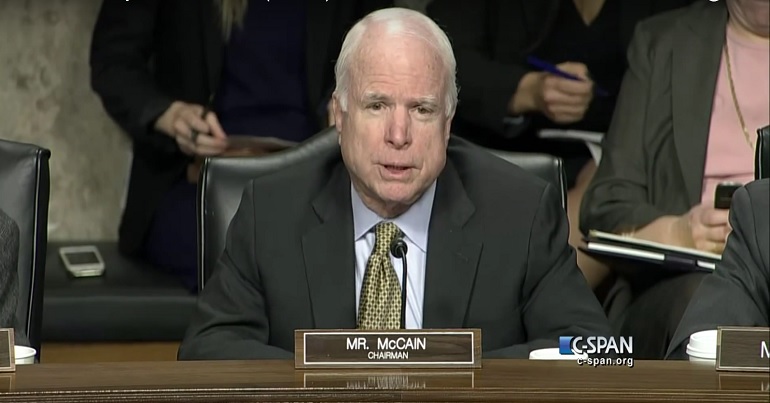 US senator John McCain died aged 81 on 25 August 2018, after succumbing to a brain tumour. High praise for the former war veteran has been pouring in from members of the US liberal, media and political class. Yet missing from most comments and obituaries is a proper consideration of his world view and policies.

Applauded by liberals both ‘neo’ and ‘left’

Former President Barack Obama and former First Lady Michelle Obama released a statement celebrating his ‘shared fidelity’ to the “ideals for which generations of Americans and immigrants” fought. Susan Hennessey, executive editor of the Lawfare blog and analyst on CNN, said he was a “good, good man”.

And finally, none other than US presidential candidate Bernie Sanders honoured McCain as:

an American hero, a man of decency and honor and a friend of mine. 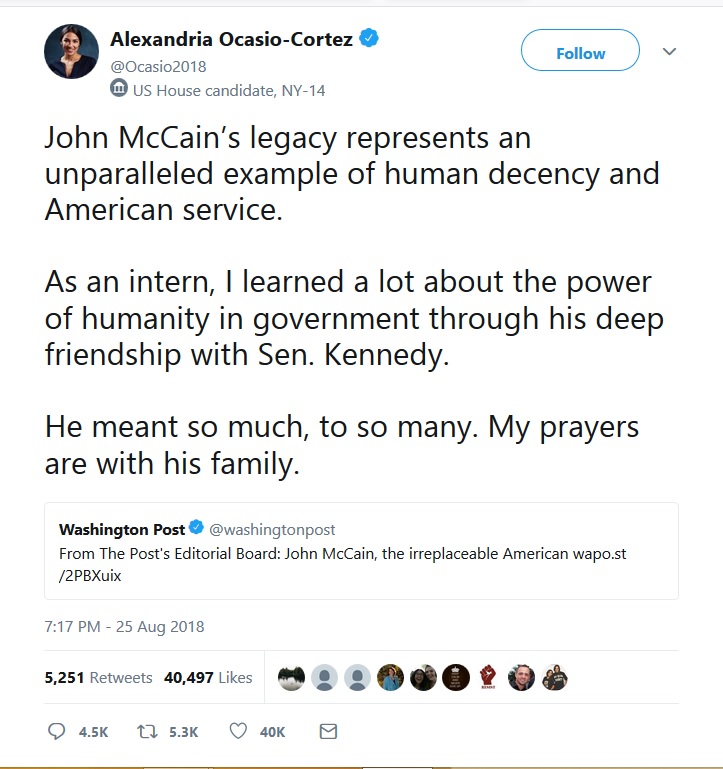 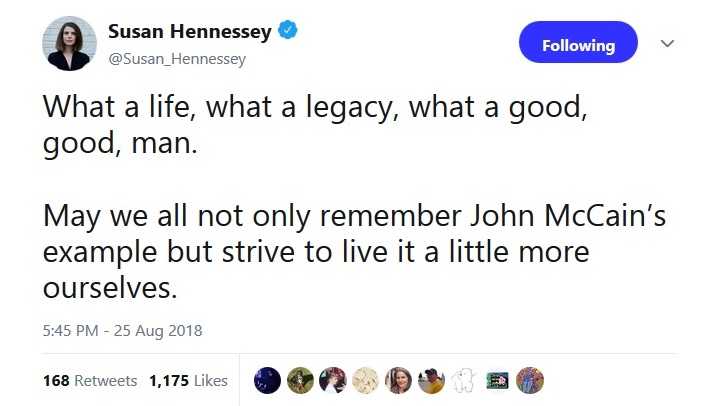 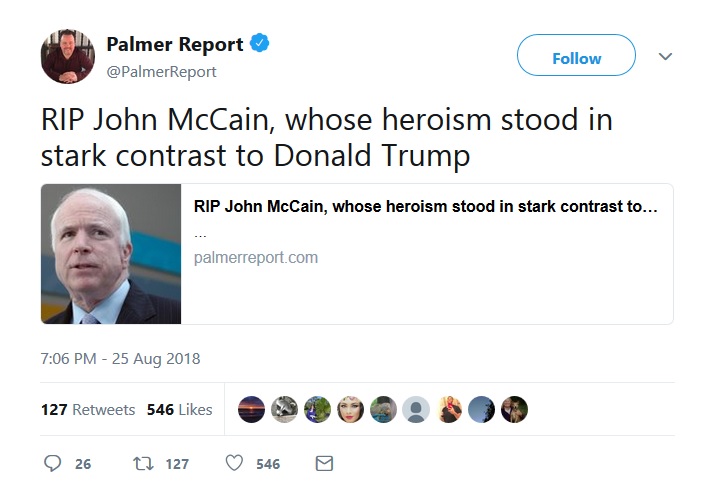 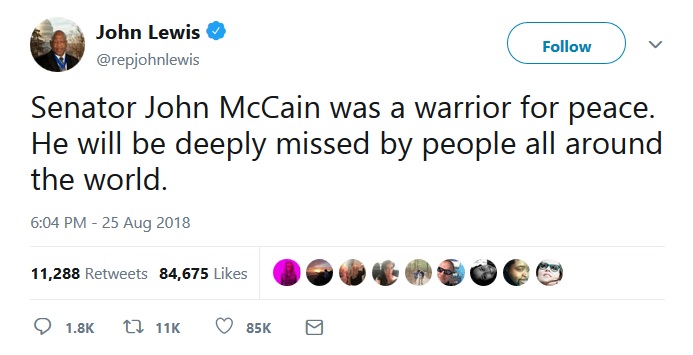 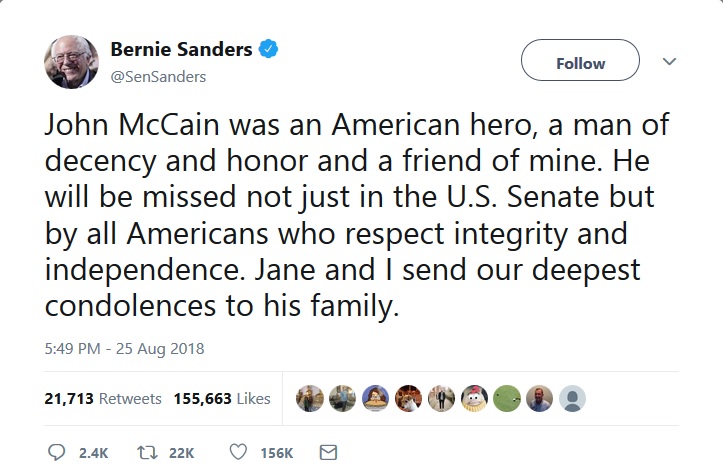 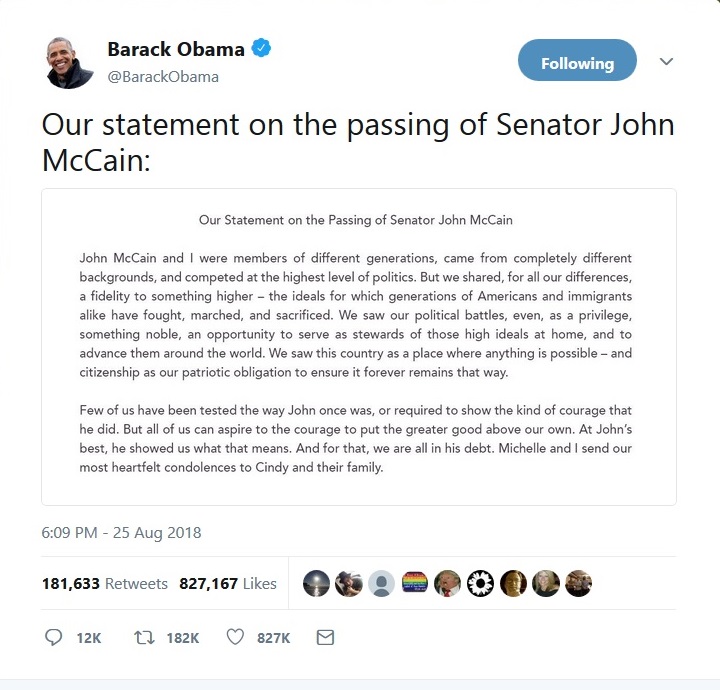 Freedom House describes him as a champion “of democracy for all the peoples of the world”.

US National Public Radio compiled a list of praise from establishment political figures from across the spectrum.

But how much does the praise add up in reality?

In order to appreciate both the man and the impact he had, his world view and foreign policy positions deserve detailed consideration.

He opposed torture by US military

McCain, who was captured and tortured during the Vietnam war, was an outspoken – albeit inconsistent – critic of torture carried out by US forces.

Retired colonel Lawrence Wilkerson, who served under secretary of state Colin Powell in the Bush administration, spoke to The Canary about McCain.

Wilkerson, who is also a veteran of the US war in Vietnam, said:

I believe that what is important to remember about Senator McCain is that most of the time he believed ardently in the policies that he advocated. I did not always agree with those policies, but I admired the fidelity to them that he displayed. One of his policies with which I did agree was his passionate opposition to torture. In December 2005, Senator McCain and his staff worked diligently with a group to which I belonged that wanted to get the US Armed Forces immediately out of the business of torture. We were successful and a large part of the reason was John McCain’s help in the Senate.

In 2017 McCain received the Liberty Award. During his acceptance speech he proclaimed:

We are blessed, and we have been a blessing to humanity in turn. The international order we helped build from the ashes of world war, and that we defend to this day, has liberated more people from tyranny and poverty than ever before in history. This wondrous land has shared its treasures and ideals and shed the blood of its finest patriots to help make another, better world.

However, as this short video from 2000 shows, the Arizona senator’s ‘liberty’ came in a strange package, as he openly called for invading or overthrowing states such as North Korea, Libya, and Iraq.

has been eager to bomb, invade, or destabilize 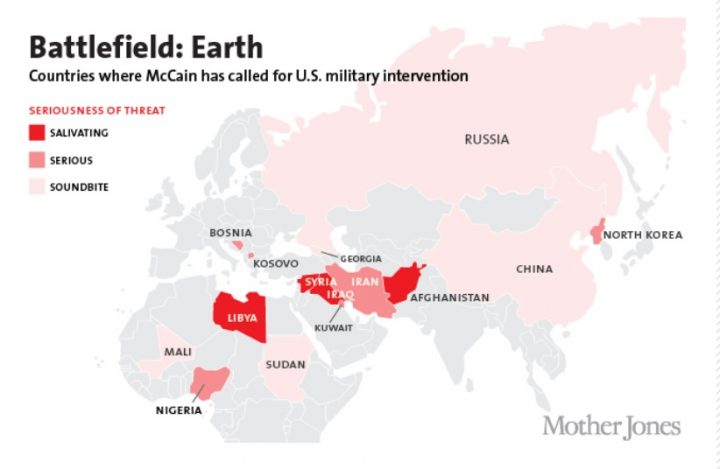 What I remember most about John McCain was the simplicity of his approach to Iran, sung to the tune of the old early 60s hit Barbara Ann – he sang out quite joyfully: ‘Bomb bomb bomb bomb bomb Iran…’

Bennis concluded by saying: “He was a militarist who privileged war over diplomacy”.

Wilkerson, who is now an adjunct professor at William and Mary University, told The Canary:

John McCain’s foreign policy views were too reflective of the hegemonic empire we have become. I believe such views are leading America to bankruptcy and ruin. If we do not learn to co-exist with other powers in the world rather than try to dominate them with our financial, economic, or military power, we will perish with them.

McCain said he modelled himself on former US president Teddy Roosevelt. In 2008, Reuters journalist Bernd Debusmann wrote that McCain revered the former “progressive” US president. The Nobel Peace Prize winner was elected in 1901, and known for establishing national forests and parks, and breaking up monopolies and business cartels.

But on foreign policy Roosevelt was an imperialist of the highest order. He was the first to articulate America’s right to “international police powers”, and it is his foreign policy that McCain often celebrated. He was also an open racist who defended and justified the genocide of Indigenous peoples as progressive, and necessary for civilisation and modern society.

According to the McCain institute at Arizona State University:

Senator McCain has relied on Dr Kissinger’s brilliant strategic mind and wise counsel for many years, since they first met in 1973 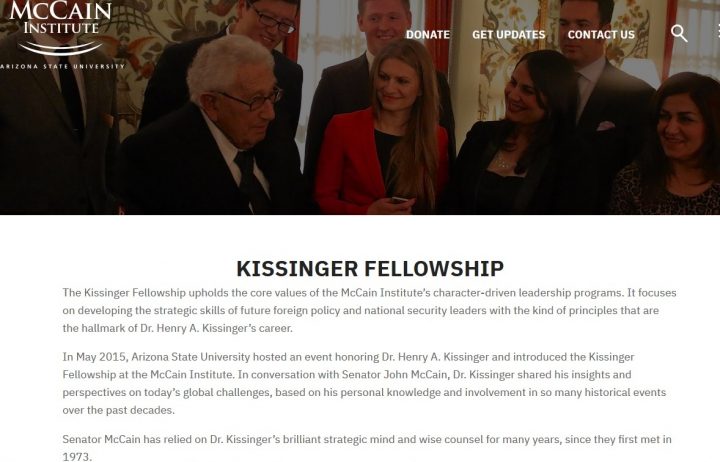 Henry Kissinger was secretary of state and national security adviser to former US President Richard Nixon. The Nobel Peace Prize winner oversaw the covert illegal bombing against Cambodia (which McCain openly supported) and Laos. Kissinger also backed the military coup of Augusto Pinochet in Chile, and supported the right-wing “dirty war” in Argentina. He also gave the “green light” to the genocide in East Timor by the military coup government of General Suharto of Indonesia.

McCain chaired a 2015 senate hearing on foreign affairs, inviting Kissinger for his advice. Code Pink anti-war protesters briefly disrupted the hearing, calling for Kissinger to be tried for war crimes. McCain called them [2.30] “low life scum” and then apologised to Kissinger for the protests. 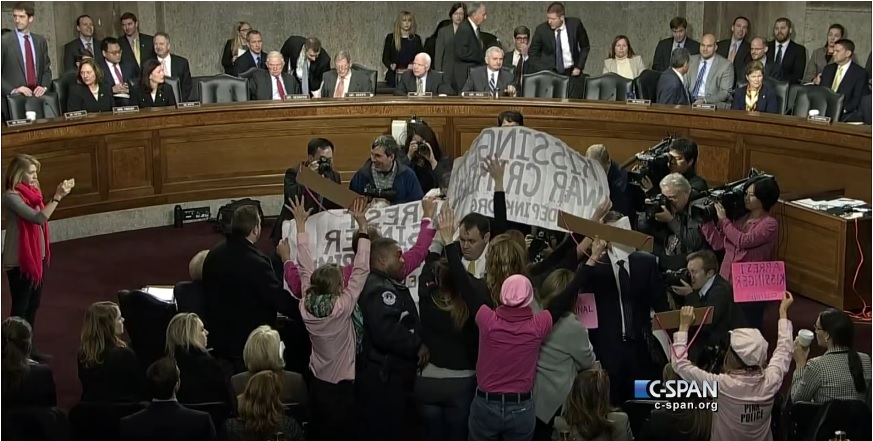 In the 1980s, McCain sat on the board of an organisation linked to “ultra-right-wing death squads” in Latin America, the United States Council for World Freedom.

McCain also chaired the right-wing International Republican Institute for 25 years, an organisation the Center for Economic and Policy Research describes as:

a group that has supported the ouster of democratically elected presidents in Haiti and Venezuela in recent years.

Wilkerson described some key differences between his own foreign policy views and McCain’s:

I was working to get the US out of its support for Saudi Arabia’s war in Yemen, while Senator McCain seemed to be supportive of the US efforts. I have similar views on Russia. Senator McCain seemed to want a new cold war with Russia, while I subscribed to George H.W. Bush’s view that the world would be significantly better if Moscow and Washington were talking, coordinating policies, and, very particularly, working to limit nuclear weapons in the world.

A ‘new cold war’ with Russia

A dyed-in-the-wool cold warrior, McCain’s Russophobia is as long-standing as it is notorious. He once told a crowd that:

Russia is a gas station masquerading as a country.

It’s kleptocracy. It’s corruption. It’s a nation that’s really only dependent upon oil and gas for their economy, and so economic sanctions are important.

In 2003 he signed a document drafted by the neoconservative Project for the New American Century (PNAC), calling for sanctions to be placed on Russia. A “key belief” of PNAC is that:

America should seek to preserve and extend its position of global leadership by maintaining the pre-eminence of U.S. military forces.

McCain supported the US-backed coup in Ukraine, resulting in a brutal civil war and Russia’s intervention in Crimea. He openly encouraged anti-government protests, and sending weapons after the coup. And he repeatedly met with fascists, connected to militias, linked to the coup government. The violence has killed thousands since the coup. 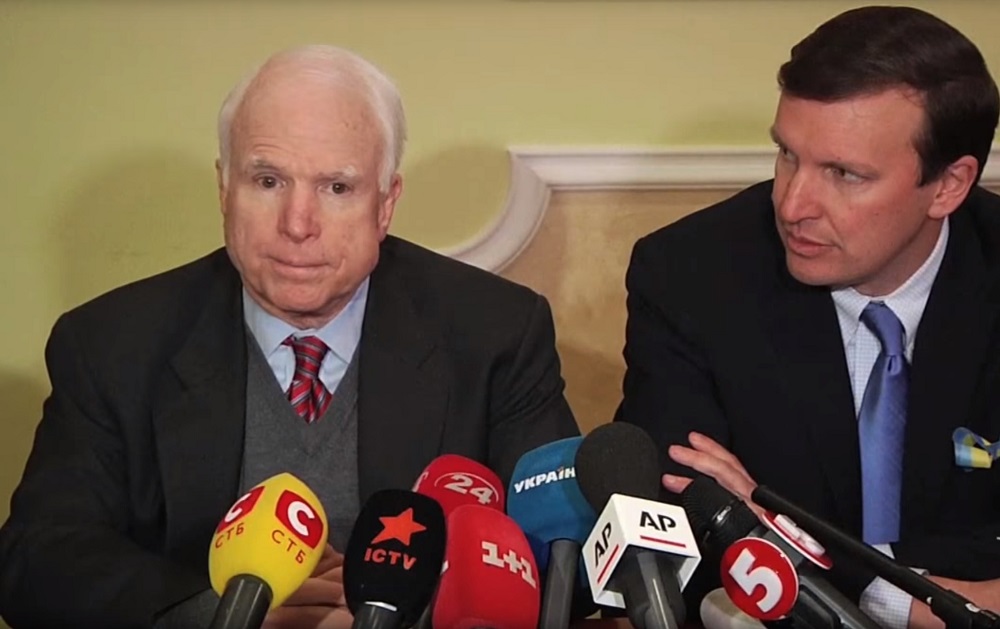 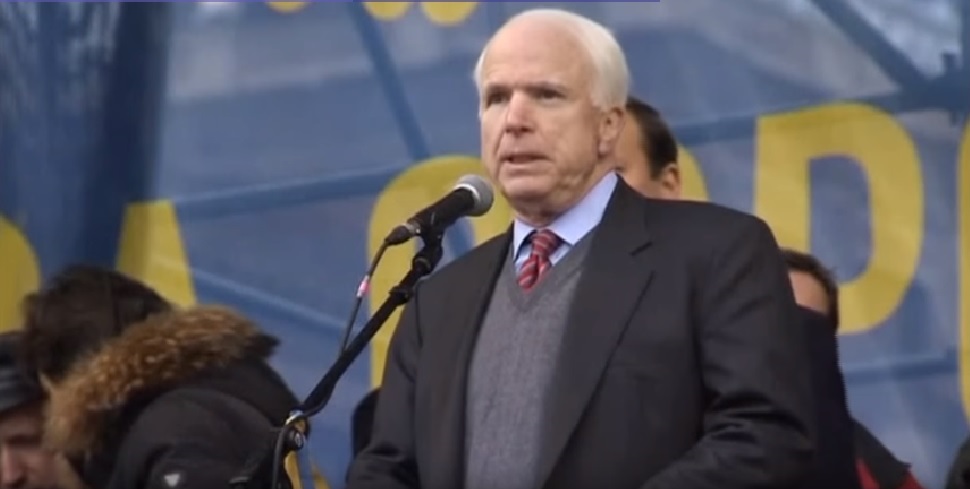 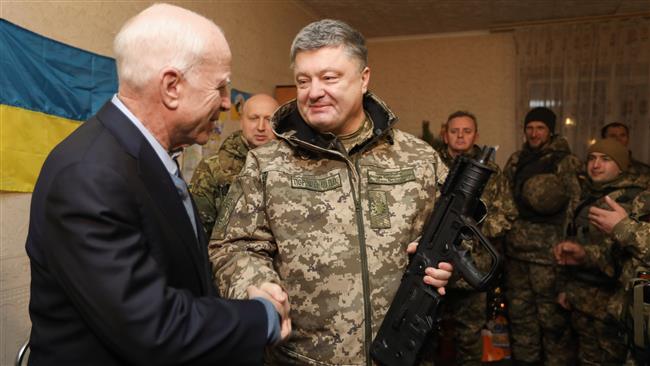 McCain was the main conduit for the Obama era effort to rebrand neoconservatism. [Neoconservatives] like Kristol and Kagan poured almost all their energy into him. [US Senators] Lindsey Graham, Tom Cotton, Marco Rubio were their secondary conduits but it always came back to funnelling all the propaganda through McCain, especially during Ukraine.

Martin directed and produced the brilliant three-part documentary series about US militarism, A Very Heavy Agenda.

the last 4 years of McCain’s life were defined by trying to do everything he could to prevent a détente with Russia and to escalate tensions.

McCain openly pushed air strikes, arming rebels, and “boots on the ground” in Syria. And in 2013, he travelled to the country and met Free Syrian Army (FSA) commanders. Questions were raised concerning whether McCain was seeking to sabotage Obama’s attempts to negotiate a Syrian ceasefire with Russian President Putin.

In January this year, FSA rebels allied with the invading Turkish army, to ethnically cleanse Afrin of its Syrian Kurdish population. Gross human rights violations by the FSA continue to be documented in occupied Afrin, previously among the most peaceful areas in the region.

All this is in spite of the fact that the US presence in, and strikes against, Syria unequivocally violates international law.

Before he died McCain was “honoured” with his name added to a “$717 billion military spending bill”. Perhaps it is unsurprising then, that US weapons behemoth Lockheed Martin called him “a true patriot” who “will be greatly missed”.

More in common than divides them

That members of the liberal class have been heaping praise onto McCain should not be surprising. It’s true that McCain wanted to privatise the US social security system, but so did Obama. And while he supported coups, militarism and ‘free trade’ deals, so did Hillary Clinton. In reality he has more in common with his ‘liberal’ counterparts than many would care to admit.

Wilkerson, himself a lifelong member of the Republican Party, ended his thoughts to The Canary saying that we are “staring into the abyss” of climate change.

Concluding on a sombre note he said:

If I fault Senator McCain for a single, overriding shortcoming, it is that he did not see this existential challenge clearly. It is the ultimate challenge – a challenge we may already be too late in meeting.

Alas, in this respect, McCain is hardly alone. To understand McCain is, in many respects, to understand the US establishment and US imperialism. Which is why we must seek to understand rather than whitewash the world view and policies that he openly and aggressively championed.