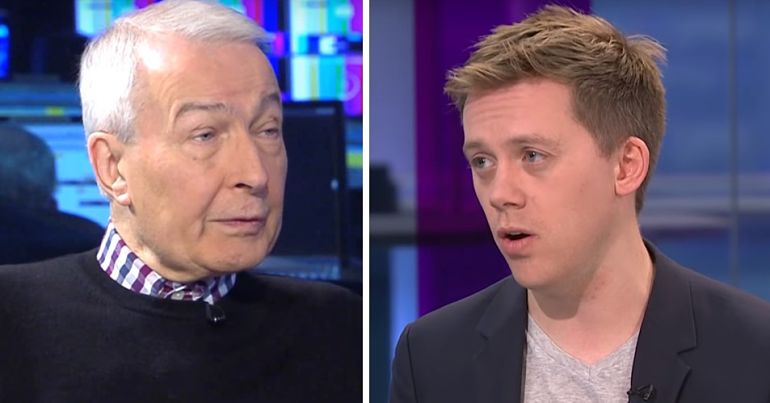 On 30 August, Frank Field resigned the Labour whip, citing ongoing antisemitism allegations against the party as the reason. But Owen Jones delivered a withering assessment of both Field’s Labour credentials and his motivation for resigning:

Owen Jones on how Frank Field angered his CLP:
-He voted with Tories on Brexit, propping them up, and was about to be deselected.
-He spoke of standing down in 2015 to become an independent
-He described Thatcher as a hero, & wrote an article admiring Enoch Powell..@OwenJones84 pic.twitter.com/I9bSMacqzn

“Jumped before he was pushed”

Field defied the Labour whip, voting with the government on a key Brexit bill in which a defeat for the government could have left it on the verge of collapse.

Birkenhead, his constituency, then “passed a vote of no confidence against him”.

A Labour source told the BBC:

Frank has been looking for an excuse to resign for some time.

Maybe his ‘surprise resignation’ isn’t a surprise after all:

Meanwhile, others suggested it was “offensive” for Field to use antisemitism allegations as a smokescreen:

Jones condemned Field’s motivations for resigning as well as his problematic views:

he’s somebody who described Margaret Thatcher as a hero. He’s someone who’s written an article speaking of his admiration for Enoch Powell.

In 2008 a Church of England Bishop suggested Field was pushing the same message as Powell following comments Field made regarding the need to cut immigration.

And during Ed Miliband’s tenure, Field questioned his own place in the party due to his perception that it was weak on immigration:

When Ed Miliband was leader, Frank Field says he thought "God, what am I doing in this party" because it wasn't anti-immigration enough. https://t.co/Hhd5HiH949 pic.twitter.com/4L9W0gHkyZ

This is the same Miliband who declared Labour would take a tough stance on immigration, famously even slapping the message on a mug:

Drinking out of my Ed Miliband memorial mug pic.twitter.com/iJ9zv4Ojlx

In 2011, Field claimed that “migrants take nine out of ten jobs” whilst calling on the government to introduce tougher sanctions on long-term unemployed people. It’s no surprise openDemocracy editor Adam Ramsay feels Labour is “much better off without him”:

In the early days of Cameron’s government, Frank Field worked hard to shift the blame for the financial crisis from the powerful onto the unemployed and immigrants. Labour is much better off without him. https://t.co/g4KIp44U4P

One Twitter user hit the nail on the head with a cutting assessment of Field’s sincerity:

Field has consistently pushed the myth that migrants are the key cause of society’s problems, deflecting attention away from the powerful. And now he stands accused of disingenuously using antisemitism to cover up the fact that his own actions have left him with no choice but to resign.

The Labour Party is stronger without him.