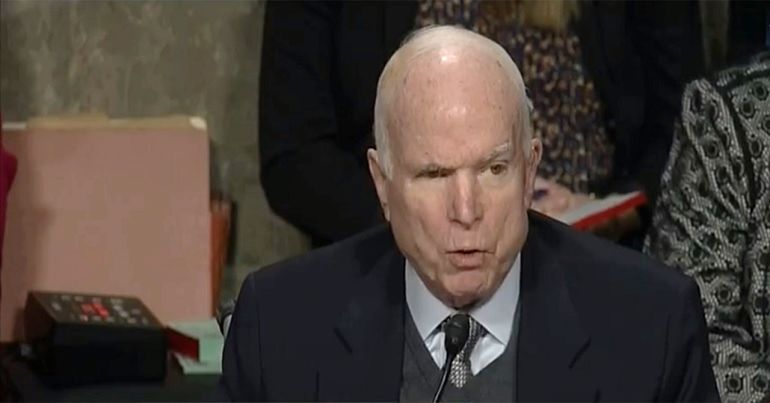 The White Helmets search-and-rescue group (aka Syria Civil Defense) has joined the chorus of voices celebrating the late US senator John McCain, describing him as “one of our best supporters”.

The Syria Civil Defense, express our deepest condolences to the McCain family upon the death of one of our best supporters, Senator John McCain.@SenJohnMcCain pic.twitter.com/F0TELntDKb

They called the neoconservative war hawk — I kid you not — "a staunch supporter of peace, human rights"https://t.co/iFsRdXWx3X

@DrMarcusP @KevorkAlmassian Indeed, the black flags of #AlQaeda, #ISIS & Arar al-Sham all flying half-mast in #Idlib #Syria this week for Sheikh #McCain. Who will sell them TOW Missiles and Manpads now?

White Helmet's condolences at the "sad" passing of their biggest supporter, John McCain. Says it all, doesn't it? 🙄 https://t.co/6kiLKvuDeq

Another one of those told you so moments https://t.co/HHoCOeA11v

Even a supporter was surprised:

I will always adore and support them, but the White Helmets are making a big mistake praising John McCain (he never cared about Syria). Other than that, they are Syrian revolutionary heroes, valiantly risking their lives to save victims of the Assad regime's aerial bombardment. https://t.co/pvAl5jWGsU

The McCain institute of Arizona State University honoured the “neutral” White Helmets with its “2018 Award for Courage and Leadership”:

In 2016, award winning journalist and contributor to The Canary Max Blumenthal published a report on the White Helmets.

The White Helmets’ leadership is driven by a pro-interventionist agenda conceived by the Western governments and public relations groups that back them. Anyone who visits the group’s website—which is operated by an opposition-funded PR company known as the Syria Campaign—will be immediately directed to a request to sign a petition for a no-fly zone to “stop the bombs” in Syria.

In 2013 McCain met with leaders and members of the anti-government Free Syrian Army (FSA). Some commentators suggested that he was seeking to undermine peace talks.

Then in March this year, up to 25,000 FSA militants allied with the invading Turkish army (and allegedly with ex-ISIS fighters) in sacking and occupying Afrin city. Afrin has been part of the radical experiment in direct-democracy, known as Democratic Confederalism. But it is now controlled by anti-Kurdish Turks and Sunni-Arab chauvinists.

Odd how White Helmets openly gloating over Turkey's Afrin invasion, which has resulted in persecution of Yezidi & cleansing of leftist Kurds https://t.co/uvQfyhE5Et

War crimes against Afrin’s population continue to be documented.

In Afrin the Turks are Looting and Pillaging with Gunfire

Within two weeks of the Turkish occupation, the White Helmets announced their presence in occupied Afrin:

After two and a half years of prohibition, the #SyrianCivilDefense returned to work in the Syrian city of #Afrin to serve all Syrians. The #PYD and #YPJ closed the center and arrested the volunteers who were working there, to come back today and be with the residents. pic.twitter.com/32OHmLBvzN

150 volunteers and 50 vehicles are enlisted in the campaign, to remove rubbles from the city's neighborhoods. Following this, sights which are out of service will be restored in order to make the city aesthetically pleasing to emotionally help heal the people in the city. #Afrin pic.twitter.com/LQjYSSwrvG

But the reaction has been less than positive:

You have lost all my respect. That is not what happened with YPG and YPJ, and you know it. Stop spreading lies.

I am so disappointed in this, and to think I, as an emergency worker myself was in support of you guys, well not any more. Emergency workers are supposed to be impartial with no political allegiance or agenda but you have sided with Turkey who stand side by side with ISIS.

"Couldn't get any proper work done while those uppity socialists with their gender equality ideas were getting in the way. Thank you Erdogan for Making Afrin Great Again!" pic.twitter.com/obgV0GWAvX

LOOOL you never were in Efrin before but now your Ankara Caliph decided to turn Efrîn into Jihadi Paradise the White AQ Helmets were also flown in to occupy some Kurdish homes, ethnically cleansed by your buddies

The local administration in Afrin banned the group in December 2015, and their volunteers were arrested and their equipment confiscated. The group was likely banned [due] to its alleged links to rebel groups that, in April 2015, kidnapped 300 Kurds.

Kurds, on the other hand, claim the White Helmets only operates in areas controlled by the Turkish-backed rebels.

Kurdish media: "The White Helmets in Afrin have drawn backlash from some residents who are accusing the group of whitewashing Turkey’s occupation of the northwestern Syrian Kurdish enclave" https://t.co/Y27hVkvwE1

The UK foreign office has confirmed that:

Other major donors include the Ministry of Foreign Affairs of Germany, the Netherlands, and Denmark, under the auspices of Mayday Rescue.

The US government also reportedly finances one third of the group’s budget.

As such, the White Helmets receive direct support from governments participating in the Syrian war.

Regardless of the humanitarian work of the White Helmets, endorsing someone like McCain as a “man of peace” will only serve to harden the views of those who see them as little more than a ‘soft power’ organisation, created to facilitate propaganda for western intervention in Syria.