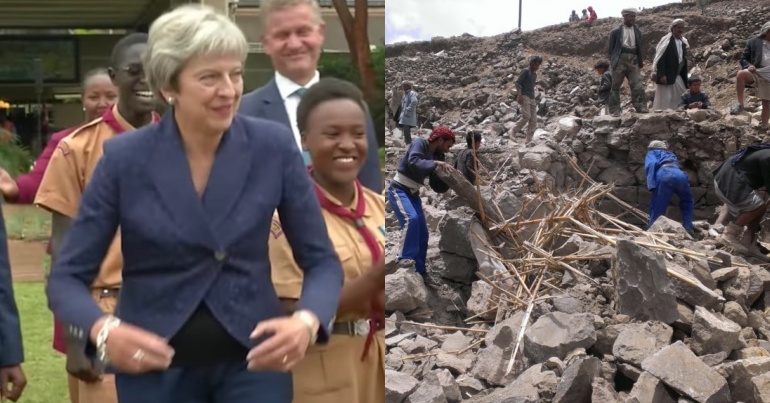 Experts from the United Nations Human Rights Council (UNHRC) have “strongly” suggested that war crimes have been committed in the ongoing civil war in Yemen. And while Theresa May dances in Africa, her government’s actions mean the UK is complicit in these alleged crimes.

In a report released on 28 August, the UNHRC found that:

parties to the armed conflict have perpetrated, and continue to perpetrate, violations and crimes under international law…

individuals in the Government of Yemen and the coalition, including Saudi Arabia and the United Arab Emirates… have committed acts that may, subject to determination by an independent and competent court, amount to international crimes.

The report also noted, “that coalition air strikes have caused most direct civilian casualties”. And the experts also had:

reasonable grounds to believe that individuals in the Government of Yemen and the coalition may have conducted attacks in violation of the principles of distinction, proportionality and precaution that may amount to war crimes.

According to the UN, Yemen is the “worst humanitarian crisis” in the world. But, as May dances in Africa, the UK is selling arms to Saudi Arabia. Her Conservative government is complicit in this ongoing violence and its devastating consequences.

UN: Some #Saudi-led coalition air strikes in #Yemen may amount to war crimes:.

We are complicit as long as we fail to #StopArmingSaudihttps://t.co/biHxVfdQq9

On 9 August, a Saudi-led coalition bomb hit a school bus in Yemen, killing 40 children and 11 adults.

This was just the latest tragedy in a brutal war.

Since March 2015, the Saudi Arabia-led coalition has been fighting Houthi forces in Yemen and those loyal to former president Ali Abdullah Saleh. According to Human Rights Watch, the Saudi-led coalition is:

This is because Saudi Arabia is also the “UK’s biggest arms customer”. According to Campaign Against Arms Trade (CAAT), the UK has licenced £4.7bn of arms exports to Saudi Arabia in the past three years. And these arms have been used in the brutal Saudi-led war.

The UK has continued to support Saudi airstrikes in Yemen and provide arms despite overwhelming evidence of repeated breaches of international humanitarian law.

This is in clear violation of European and international law. It also violates the UK’s own guidelines on arms sales, and makes a mockery of the government’s claim to control arms exports “rigorously”. Yet foreign secretary Jeremy Hunt has defended the UK’s links to Saudi Arabia.

The Saudi dictatorship is a Western ally. Heavily linked to terrorism, and the escalation of the war in Syria, this is not the first time Saudi has faced allegations of war crimes in Yemen. Despite denials by the Saudi foreign minister, a UN report in 2017 stated that:

In addition to the devastating loss of life from bombing in the Yemeni war, the UNHRC report also recorded alarming and systematic abuses of human rights. It noted frequent cases of “arbitrary detention… and ill-treatment and torture in some facilities”. Most were detained without charge and denied access to legal advice or communication. Some people are missing.

The UNHRC also documented widespread harassment of journalists and human rights defenders “in blatant disregard of human rights law”. But the devastation doesn’t end there, as UNHRC experts recorded:

persistent and pervasive aggressive behaviour, including sexual violence… Examples include rape, of men and women, and sexual violence against displaced persons, migrants and other vulnerable groups.

Evidence revealed that both sides have:

conscripted or enlisted children into armed forces or groups and used them to participate actively in hostilities. In most cases, the children were between 11 and 17 years old, but there have been consistent reports of the recruitment or use of children as young as 8 years old.

The UNHRC has called for further investigation and prosecution against those responsible for these crimes. Meanwhile, unless the UK ceases to profit from arms sales to Saudi Arabia, we are fully complicit in these war crimes.

May might be dancing, but the devastation in Yemen continues. It’s time to act and demand an end to arms sales. Now.