A 12,000-year-old forest is the site of an extraordinary showdown over dirty energy - The Canary 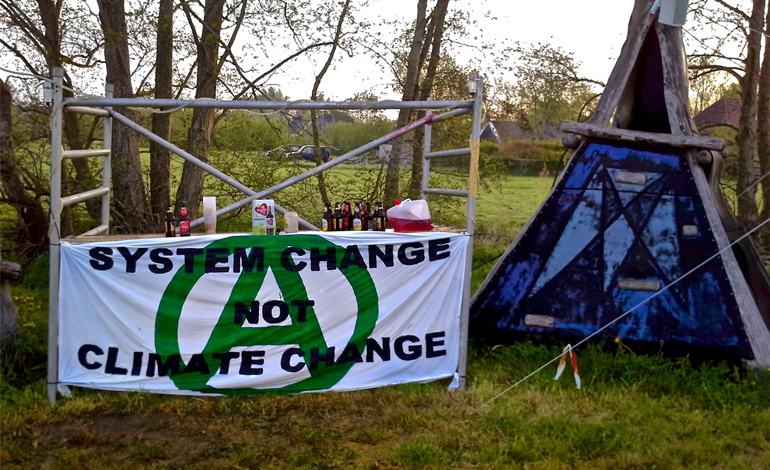 Resisting the destruction of a 12,000 year old forest, protesters in Germany clashed with police on 27 November. The showdown came after a German court permitted energy company RWE to expand its lignite coal mine. And the Hambach Forest resistance is a ‘symbol’ of environmental struggles fighting major corporations across Europe.

On 24 November a local court ruled that RWE is able to expand Germany’s biggest mine for lignite coal. Lignite is “considered one of the most polluting forms of fossil fuel”. And at 52 square miles, the pit is one of the largest open-pit mines in the world. Coal in Germany is responsible for nearly 40% of the country’s electricity and more than 20% of the EU’s greenhouse gas emissions.

The 24 November ruling responded to a legal bid by environmental group BUND [German] that the forest should be protected because it’s a habitat for many endangered animal and plant species. And expansion of the mine will destroy Hambach Forest, activists claim. So clashes came as RWE began clearing sections of forest behind lines of police and private security.

The Higher Administrative Court has today submitted a settlement proposal to the parties in the matter of Hambach Forest. It stipulates that RWE Power AG will not carry out any further deforestation and clearing measures in the contested area in the Hambach Forest until December 31th, 2017, and that the defendant Land will obtain an expert opinion as to whether the wooded area, with regard to the Bechstein bat, fulfills the criteria for an FFH [protected species] area.

Nonetheless it is estimated that more than 10 acres of forest were felled during RWE’s two days of clearing.

RWE’s mine has been a site for environmental resistance for years. Activists have occupied Hambach Forest since April 2012 with treehouses, aerial walkways and barricades. Approximately 200 people currently live at the occupation.

But there are other environmental conflicts going on around the world. Others, like the resistance at Standing Rock against construction of an oil pipeline through indigenous territory in the US, have attracted global attention. And there’s the ongoing anti-fracking camps at Preston New Road and Kirby Misperton in the UK.

In defence of the Earth

But two other long-running land occupations have gone largely unmentioned by the mainstream press. The first is La ZAD, established to prevent the building of a new international airport near Nantes, France. This 4,000 acre site began in 2009 and has become a living community in its own right.

Roughly 200 people live at La ZAD permanently and 2,000 more come and go from the site. It has its own infrastructure including food production networks, pirate radio station, brewery, library, and community newspaper. Despite several attempts at eviction over the years, residents and activists continue occupying the land.

And in the UK a similar camp against the building of a new runway at Heathrow Airport has thrived for more than seven years. Grow Heathrow is situated on the edge of Sipson, a village that will be torn down to make way for the new runway.

It is home to about 20 people and includes organic gardens, a bicycle workshop, kitchens, communal spaces and living quarters. The camp received a 14 day eviction notice in June 2017 but remains in place and is actively recruiting new residents.

Land occupations like these have become an important tool for defending the environment. They also offer living, working models for different forms of society. And that’s something we should all be looking to as our climate change crisis continues to grow.

– Stay up to date with the Hambach Forest on Twitter.

– Read other environment stories on The Canary.