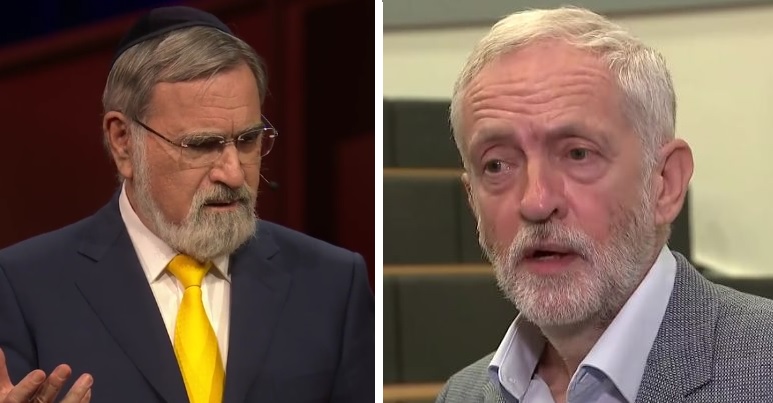 The UK’s ex-chief rabbi likened Jeremy Corbyn to Enoch Powell on 28 August. In an interview with the New Statesman, Jonathan Sacks claimed a past remark by the Labour leader was:

the most offensive statement made by a senior British politician since Enoch Powell’s 1968 ‘Rivers of Blood’ speech.

Since his attack, however, people have pointed out that Sacks is no stranger to offense. In fact, there are plenty of things to find hateful about what the ex-chief rabbi gets up to when he’s not attacking Corbyn.

The Daily Mail recently unearthed a 2013 video of the Labour leader. In it Corbyn essentially ridiculed a group of “Zionists” after they “berated” the Palestinian ambassador for a speech he made. The Labour leader claimed the group of Zionists present during the speech didn’t “understand English irony” which the ambassador had used “effectively”.

It’s these comments that Sacks compared to Powell’s racist speech. He told the New Statesman:

It was divisive, hateful and like Powell’s speech it undermines the existence of an entire group of British citizens by depicting them as essentially alien.

Contrary to Sacks’s assertion, a Labour spokesperson said the Labour leader wasn’t using the word “Zionists as any kind of shorthand for Jews”.

As an editor for Jacobin pointed out though, Sacks has a ‘hateful’ and ‘offensive’ episode in his not-so-distant past:

The event Ronan Burtenshaw highlighted happened in 2017. The annual march that year coincided with a celebration of Israel’s 50-year-long illegal occupation of East Jerusalem. Sacks extended a “personal invitation” to Jewish people living outside Israel to join him on a visit which included the march and “dancing with our brave IDF soldiers” in occupied Hebron.

It’s hard to think of an event more offensive, divisive and hateful to Palestinians than this celebration. Although Sacks’s comments from 2012 about Israel’s racist crimes are a strong contender:

In 2012, Sacks claimed in The Jerusalem Post that the “accusation” Israel has committed human rights abuses such as "racism" or “crimes against humanity” is “the only form in which an assault on Jews can be stated today.”https://t.co/klAfjB2MVU pic.twitter.com/DsMt5jyRRR

Sacks effectively dismisses the “by-now routine accusation” that Israel is guilty of multiple human rights violations against the Palestinians by accusing those who claim that of carrying out “an assault on Jews”. Criticism of Israel, according to Sacks’s theory, is about antisemitism. The Palestinians themselves, and the suffering successive Israeli governments have inflicted on them, don’t even really factor into his assessment.

Clearly, the ex-chief rabbi’s offensive and prejudiced words and actions on Palestine are relevant to his attack on Corbyn. Because, on this occasion, the Labour leader was essentially defending the Palestinian ambassador. And Corbyn has also been a longstanding, vocal critic of Israel’s apartheid government.

So far, the New Statesman has failed to give people this context for Sacks’s comparison of Corbyn to Powell. But a lack of context is typical of much of the British media’s reporting on Corbyn. Of course, smears don’t go down too well if they’re not accompanied by a sizable dollop of spin.

Context gets in the way of that.