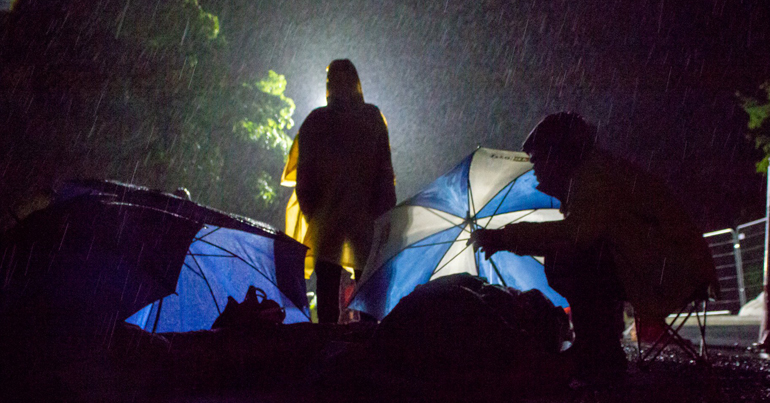 Coalmine contractor Banks Mining had until 3 June to begin work on an opencast mine in County Durham. But in the days leading up to the deadline, campaigners against the project stepped up their activity. And on 4 June, they claimed a “massive achievement”.

Planning permission for Bradley mine – near the village of Dipton in the Pont Valley area of County Durham – required groundbreaking to begin by 3 June. Banks Mining said on 1 June that it had begun this work. But the Campaign to Protect Pont Valley, which opposes the project, said construction of an access road to the A692 is a necessary part of the planning permission [pdf, p3].

On 1 June, activists in Newcastle used a ‘lock-on’ to prevent Tyndale Roadstone delivering tarmac to the access road construction. This involves people securing their arms or wrists into a sealed metal or concrete container. This makes it difficult for police to move them.

Although the Newcastle lock-on finished after 10.5 hours, other activists continued a series of lock-ons at the Bradley mine access road construction through the weekend. As a result, the Campaign to Protect Pont Valley said on 4 June that Banks Mining had failed to “commence this project according to their planning constraints”. And it insisted that his was a “massive achievement for the consecutive lock-on actions blockading the road works”.

Authorities reportedly arrested five people as a result of the lock-ons.

In a press release seen by The Canary, the Campaign to Protect Pont Valley said:

Protesters say that it is essential to stop Banks Group from building the access road to ensure that the opencast does not go ahead. They say that the mine will have devastating effects on the health of the community as well as irreversible impacts on the environment.

If Banks think we’re going to leave them be, they can think again. Local people have fought for thirty years to keep this Valley green, keep the air breathable, and keep fossil fuels under the ground. In that time this country has moved past coal. Coal is our heritage but the Valley itself is the asset we value most here.

If work goes ahead, the Bradley mine is expected to recover approximately 550,000 tonnes of coal by 2021. Speaking to the BBC, Banks Mining said:

Around 30 new jobs will be supported at the site when it is fully operational, along with others in the local supply chain… Restoration will include the creation of new woodland and a nature reserve area, as well as the return of some of the land to agricultural use.

In January 2018, the UK government announced plans to close all coal factories by 2025.

Attempts to build a coal mine at the Pont Valley site have been occurring for 50 years. Local residents have long opposed such attempts. The most recent permission was granted on 3 June 2015. But since 2009, the Coal Action Network – which helps people fighting coal developments across the UK – has supported local opponents of the mine.