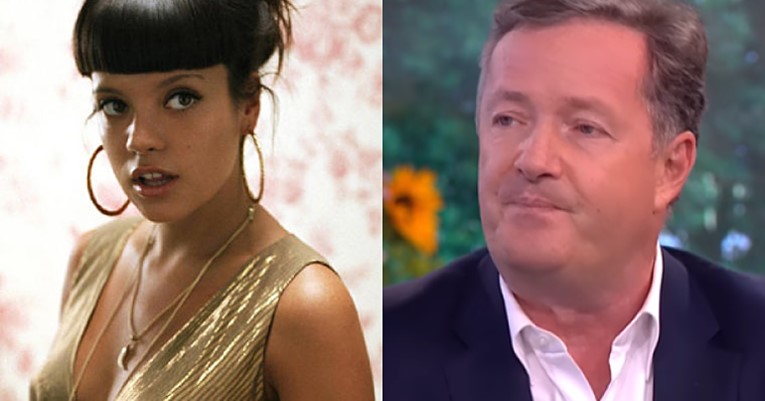 On 4 June, anti-national treasure Piers Morgan got into a Twitter spat with Lily Allen over her decision to wear a ‘gun’ necklace.

I bet he wishes he’d kept his mouth shut now.

Allen sported an AK-47 necklace at the ‘Mighty Hoopla’ festival in London over the weekend. Morgan took exception to this and tweeted:

Doesn't make it any less reprehensible the longer you wear it.
Why have you got a machine gun around your neck? https://t.co/KkvJUqH7RY

Allen’s initial response slightly missed the mark because she accused Morgan of a crime the News of the World committed rather than his previous paper the Mirror. But she then came back with both barrels:

Thanks for clarifying that, I apologise. I wear the necklace because I like it. Why did you publish deliberately concocted fake images to smear the British army ? That’s not very patriotic Piers ? https://t.co/IJLE510S4R

Allen is referring to the fact that Morgan was sacked as editor of the Mirror in 2004 after the paper printed fake photos of British soldiers abusing Iraqis.

Allen then finished Morgan off in style:

If @piersmorgan actually gave a fuck about inner city youth violence, he’d spend less time proviking people like me and Raheem and more time lobbying his actual mates,who could do something about cuts to policing and youth services.Necklaces and tattoos are NOT the problem here

As Allen inferred, this is not the first time Morgan has waded out of his depth in an argument around gun violence.

Following the news that England footballer Raheem Sterling had a new tattoo of an assault rifle on his leg, Morgan tweeted:

Here's an idea, @sterling7:
Stick a big X across that assault rifle tattoo & the words 'NO TO GUNS'. Then it works how I presume you intended it to work.
At the moment, it looks like you're glamourising gun use. pic.twitter.com/zXnGOSShdT

It seems Morgan did not consider that Sterling may have his own personal reasons for the tattoo. His father was shot dead when he was just two. Sterling stated that:

I made a promise to myself I would never touch a gun in my life time, I shoot with my right foot so it has a deeper meaning.

Morgan denies that his criticism of Sterling is influenced by ethnicity:

This is such nonsense. There is nothing remotely racist about any of the press coverage of Raheem Sterling. If a white England star suddenly tattooed an assault rifle onto his leg he would get EXACTLY the same response. Playing the race card like this is frankly pathetic. https://t.co/sqSbc4nFFt

However, Maurice Mcleod wrote in the Guardian:

The routes out of poverty are very scarce for the young, working-class black man. Sport, music and entertainment do provide a path for the select few. The narrative reserved for those who make it, though, often sounds a lot like, “We have let you in, now don’t do anything that makes us regret it”.

Morgan is an establishment troll. He makes a song and dance about being an anti-gun violence campaigner yet cosies up to powerful pro-gun advocates like Donald Trump.

People despise establishment trolls because they’re constantly punching down from their positions of power. Morgan’s criticisms of Allen and Sterling are prime examples of this, achieving nothing in addressing the issue of gun violence.

However, no one can put it better than the former Everton goalkeeper turned activist Neville Southall. In an interview with the Guardian, he said:

Piers Morgan is a prick. What gives him the right to say what can be on your body? If Sterling had tattooed a massive cock on his leg I would say: It reminds me of Piers Morgan.

Morgan met his match in Lily Allen. Long may it continue.

– Support Mothers Against Violence in their goal to tackle violence in disadvantaged communities.