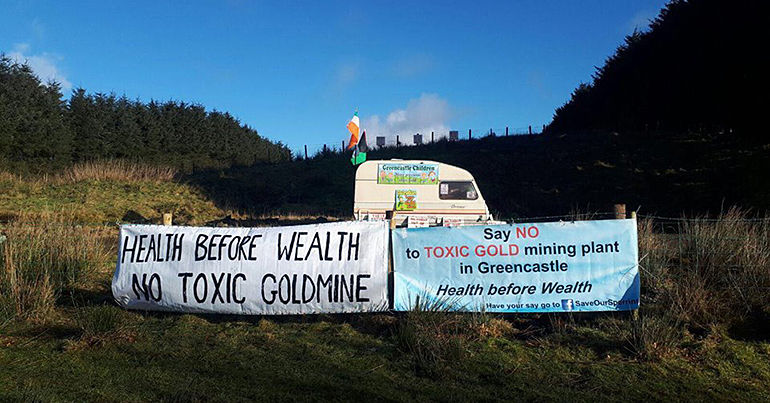 On Saturday 19 January, Cormac McAleer brought Dalradian Gold Ltd’s test drilling to a standstill. McAleer chained himself to Dalradian’s test drilling equipment at the proposed goldmine site in the Sperrin Mountains, County Tyrone. He did it to protest against its mining proposals in the community.

As The Canary reported previously, locals oppose Dalradian’s plans to mine their community and to use cyanide in the process.

McAleer is chair of local opposition group Save Our Sperrins. And he chained himself to the drill from noon until 8pm on 19 January. Protesters attempted unsuccessfully to chain another protester to the equipment the following day. But security staff prevented them from doing so.

Local opposition to the mine

Local people submitted 10,000 objection letters against this proposal. And they are getting support from the Community Environmental Legal Defense Fund (CELDF). The CELDF is a law firm protecting communities from projects that could damage their environment.

Leaks at the Baia Mare goldmine in Romania and sanctions against Barrick Gold Corp in Argentina caused locals to fear this proposal.

Dalradian applied for a full gold mining licence in November 2017. And it hopes to extract 120,000 ounces of gold a year from the area for over 20 years. It believes the site could hold four million ounces of gold deposits, worth £3bn.

A spokesperson for Dalradian told The Canary:

An individual trespassed on Dalradian’s drilling site on Saturday (19th January), climbed over protective fencing and attached themselves to one of the company’s exploratory drill rigs. For a number of hours this prevented employees from carrying out licensed and lawful company business.

There is absolutely no justification for the ongoing harassment of our employees as they simply try to do their jobs.

A court appeal decision against a local incinerator could also negatively affect Dalradian’s plans to mine. That decision could mean civil servants can’t make large-scale planning decisions without a government minister. And Northern Ireland has been without a government since January 2017. So campaigners take heart from that outcome, and promise to continue their protest.