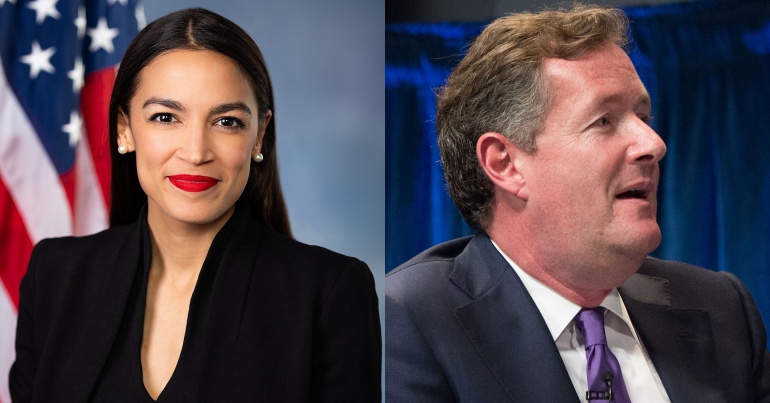 He’s known for being an opinionated know-it-all. But Piers Morgan just chose the wrong person to criticise. Because his latest attempt to patronise and mock an outstanding politician revealed what an ignorant misogynist he truly is. (And not for the first time.)

Ocasio-Cortez’s response was swift and absolutely on point. Because she totally understands the issues she’s campaigning on and the voters she represents:

When people complain about low turnout in some demos, it’s not because communities are apathetic, it’s bc they don’t see you fighting for them.

If we don’t show up for people, why should you feel entitled to their vote? https://t.co/oGRsG9NZV3

Over 50,000 people liked Ocasio-Cortez’s tweet. Thousands more shared it or made supportive comments. As ever, she also dealt with negative comments perfectly. As she pointed out, saying things like ‘Sorkin is looking for gravitas’ just plays into language bias that is often sexist, classist and exclusive:

Ever wonder how expression that’s feminine, working-class, queer, or poc isn’t deemed as having “gravitas,” but talking like an Aaron Sorkin character does? 🤔

And then Morgan waded in. But actually, his contribution just gave Ocasio-Cortez even more kudos. (Not that she needed it.)

Who knows more about politics?

Morgan’s tweet was patronising, sexist and just rude. (No change there, then.) But this time, he really chose the wrong opponent, and Twitter took him down.

For a start, many corrected his point that Sorkin ‘knows more’ than an elected politician:

Aaron Sorkin is a television writer, Alexandria Ocasio-Cortez is a sitting congresswoman, and Piers Morgan is a failed Dancing With the Stars contestant. Decide for yourself who knows what about politics. https://t.co/3MZs2iqMP8

I must have missed the bit where Sorkin was elected to office in a race against a top-ranking Democrat with a 17-1 monetary disadvantage?

Others challenged his sexist, ageist language:

Is this you, modeling grown up behavior? Nice.

Some threw Morgan’s words straight back at him:

Newsflash: people have hoped you would start acting like a grown-up and not a juvenile smart-a**e for ages, Piers, but I guess dreams never come true.

Others, meanwhile, simply showed how pointless Morgan is:

There’s no need to draw any more attention to Morgan. He’s just an attention seeker. But in the current climate of political chaos, Morgan’s open support for Donald Trump is worrying. He even offered himself as Trump’s new chief of staff. But his latest support for Sorkin is another clear racist marker.

Sorkin’s outspoken pro-Israel stance openly criticises the Boycott, Divestment, Sanctions (BDS) movement which works to end the oppression of Palestinian people. He’s also a member of the so-called Creative Community for Peace. This high-profile group works to counter the BDS cultural boycott against Israel. And it literally rewrites the real issues faced by Palestinian people. Ocasio-Cortez, meanwhile, broke the mould in US politics by accurately challenging Israel’s occupation of Palestine. So it was almost inevitable that Sorkin wouldn’t be a fan.

In her own words

Since she was elected, Ocasio-Cortez has faced continued and sustained attacks for her outspokenness and radically principled stances. Most criticisms have focused on her age, gender and ethnicity. But this hasn’t stopped her:

“ the real problem most of Washington has with “AOC”: her self-generated popularity and large social media presence means she doesn’t need to ask anyone’s permission to say anything”@mtaibbi on @AOC https://t.co/dg8bLOyR38

This has deeper consequences, bc as we’ve seen w/ narratives advanced by the right, they have trouble recognizing intelligence in people they disagree with.

This is what bias looks like: for some ppl, small mistakes mean they’re not “serious,” yet others are forgiven for worse.

If you notice, on the right they’ll flatly call people blanket terms, and even make things up. And I don’t mean trolls – I mean their biggest commentators + TV figures.

This is different from criticizing a specific take you disagree with, or pointing out discriminatory patterns.

Lastly, we wouldn’t need to talk about bathrooms at all if we acted like adults, washed our hands + minded our own business instead of trying to clock others.

Going by track record, I’d feel safer in a bathroom w/ a trans woman than a powerful male executive any day of the week.

Ocasio-Cortez is an inspiration and a political force to be celebrated. Morgan’s words won’t stop her at all. But here in the UK, as right-wing tensions grow amid Brexit chaos, his bile isn’t welcome. Eyes on Morgan. And even if we don’t want to share his misogynistic bullshit – we’re watching.