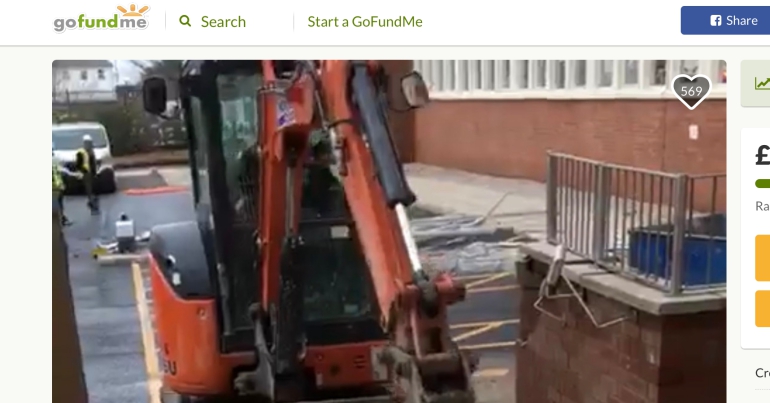 Footage of a man driving a digger through a Travelodge construction site because he hadn’t been paid has gone viral. In response, someone has set up a Go Fund Me page to raise the £600 owed to the worker and to cover any legal fees he might incur.

At the time of writing, the page has already raised around £4,000 in less than 24 hours. Many people have also left messages of solidarity.

Work on the Travelodge in Liverpool was complete when the man drove the digger through the reception area. The driver claimed he had not been paid for his work on the site and shouted:

This video shows the damage done to the building:

‘Standing up’ for his rights

The fundraising page, started by Jack Wellon, recognises the situation the worker found himself in:

Many people in the building trade encounter similar situations week in week out and this guy has helped MANY tradesmen and workers to get paid on time and to stand up for themselves when its really needed.

I used to work in the building trade here in The Cotswolds and know how the industry can work.

And he wanted to do something to support the man for ‘standing up’ for his rights:

It’s amazing to see all the workmen, families and everyone helping chip together to support this guy after he really stood up for himself and his wages.

Not only has solidarity been shown through the money raised, but it has also come through the comments on the page:

The response to this video shows just how sick people are of bosses not paying wages and how many people wished they had done the same as the man in the video.

Driving a digger through a Travelodge might be a step too far for some people. But at the very least, we can organise and we can unionise. We can fight back. And whether it’s this one worker, cleaners winning better pay, or Deliveroo workers going on strike, people are saying enough is enough and taking direct action.