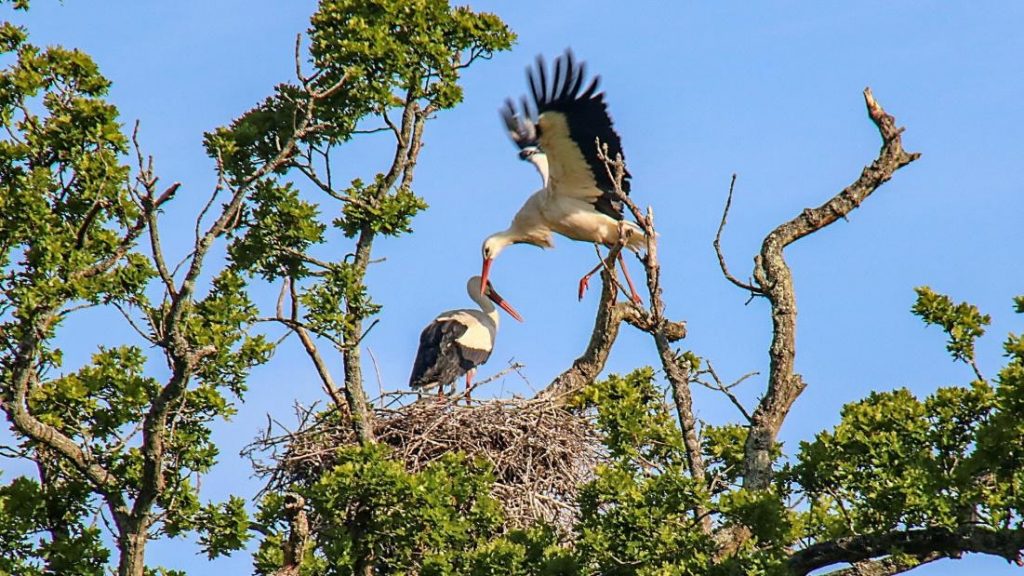 White stork chicks have hatched in the wild in the UK for the first time in centuries.

Eggs in one of three nests at the Knepp Estate in West Sussex have hatched, the White Stork Project announced.

Observers watched as the parents incubated the nest of five eggs located in an oak tree.

They were seen removing eggshells from the nest and later regurgitating food for the chicks.

It comes after the same pair of white storks unsuccessfully tried to breed at Knepp last year.

Lucy Groves, project officer for the White Stork Project, said it was the first time in hundreds of years that wild white stork chicks have hatched in the UK.

She said: “After waiting 33 days for these eggs to hatch it was extremely exciting to see signs that the first egg had hatched on May 6.

“The parents have been working hard and are doing a fantastic job, especially after their failed attempt last year.

“It is incredible to have the first white stork chicks hatch in the wild for hundreds of years here at Knepp.

“These are early days for the chicks, and we will be monitoring them closely, but we have great hopes for them.

“This is just one step towards establishing this species in the South of England. It may be a small step, but it is an exciting one.

“This stunning species has really captured people’s imagination and it has been great following the sightings of birds from the project during the period of lockdown and hearing about the joy and hope they have brought to people.”

The project aims to restore a population of at least 50 breeding pairs of white storks in southern England by 2030.

Archaeological records show white storks have bred in the UK as far back as 360,000 years ago, the White Stork Project said.

The most recent record, the project claims, was in 1416 when a pair of white storks were found nesting on the roof of St Giles Cathedral in Edinburgh.

A combination of habitat loss, over-hunting and targeted persecution are likely to have contributed to their decline.

Isabella Tree, co-owner of Knepp with Charlie Burrell, said: “When I hear that clattering sound now, coming from the tops of our oak trees where they’re currently nesting at Knepp, it feels like a sound from the Middle Ages has come back to life.

“We watch them walking through the long grass on their long legs, kicking up insects and deftly catching them in their long beaks as they go – there’s no other bird that does that in the UK.

“It’s walking back into a niche that has been empty for centuries.”