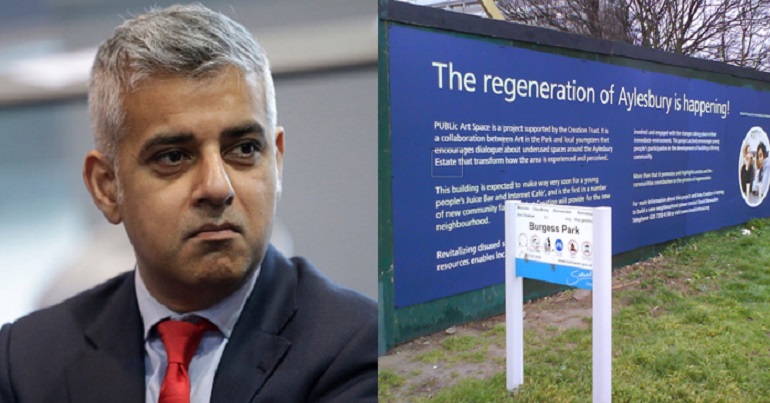 Labour’s London mayor Sadiq Khan recently launched Better Homes for Local People – a good practice guide for estate regeneration in London. But a prominent Green Party politician has called the plans “underhand” and a “harsh slap in the face” to residents.

A series of Freedom of Information requests (FOIs) by the Green Party appears to show that Khan has been less than forthcoming when he said that no new regenerations (or ‘social cleansing‘, as some would call them) would be signed off until his plans are finalised. Because the FOIs show that not only has he signed off funding for 34 estate regenerations in the past year, but this has benefited some Labour councils which openly oppose his plans.

Sian Berry is a Green Party London assembly member and local councillor in Camden. She is also chair of the assembly’s housing committee and has been openly questioning Khan’s plans. Officially launched on 2 February, one of the biggest talking points of his good practice guide for regeneration is resident ballots. Khan has committed [pdf, p7] to supporting:

The principle of mandatory ballots as part of estate regeneration schemes where demolition is involved. He therefore proposes to encourage the wider use of ballots by requiring them as a condition of his funding, and this is the subject of a further consultation published alongside this guide.

The consultation [pdf] mentioned is running until 3 April. Put in layman’s terms, Khan is pledging not to give any money to councils or housing providers who don’t officially survey residents on their opinions if their estate is up for regeneration.

So far, so good. This is where Berry comes in.

Signing off any new GLA [Greater London Authority] funding contracts during this period of consultation before your new funding guidance comes in. Is that correct?

I can confirm that no GLA-funded contracts for new estate regeneration schemes will be signed until after the consultation has closed and the precise details of the funding conditions have been finalised and published.

I’ll be signing no new funding contracts until the consultation ended [sic] and we’ve published the final programme [sic].

But now, Berry has revealed that Khan has signed off on funding for 34 estate regenerations, 16 of which [xls] were in the final two months before his decision about ballots was announced. What’s crucial to these regenerations and Khan’s funding approvals is the timeline of events that led to his announcement on 2 February.

Khan: a timeline of events

Originally, Khan published [pdf, p2] his draft good practice guide in December 2016. At the time, Berry criticised it as there were no plans for resident ballots included. So, Khan appeared to go back to the drawing board after a consultation ran [pdf, p4] until 14 March 2017. But before he officially launched the policy in February 2018, talk of resident ballots was already happening. For example, Labour leader Jeremy Corbyn announced the idea as policy during his 27 September 2017 conference speech.

Then, in November 2017, as CityMetric reported:

Publication of the mayor of London’s revised good practice guide to estate regeneration has been suspiciously delayed after Jeremy Corbyn backed resident ballots. Late consultation responses since Grenfell Tower may be one reason. But Sadiq Khan also has a defining decision to make – on residents’ right to vote to approve or reject proposals to demolish their homes.

Whose side will he come down on: some influential Labour councils and land-hungry developers? Or the 2m Londoners living on social housing estates, and the London Assembly’s Labour Group, amongst many others? The signs so far suggest a fudge.

Fast forward to February this year, and Khan announces a consultation on ballots.

So it would seem logical to assume that Khan was pretty sure that he’d have to include resident ballots in his new guide before he officially published it in February. Moreover, his own consultation on the issue saw 95% of people support ballots [pdf, p13]. A consultation the results of which Khan would have had nearly a year ago. It’s this which Berry says is a “harsh slap in the face” to social housing residents.

At Mayor’s Question Time on 22 March, the Mayor gave me a firm promise not to sign off any new funding for estate demolition while his updated policy to require a ballot of residents was out for consultation. But he was concealing the fact he has recently rushed through funding for dozens of controversial schemes, allowing councils and housing associations to dodge his new policy.

These decisions are a harsh slap in the face to many residents on estates under threat who – thanks to his actions – will be denied a ballot at the last moment before his new policy comes into force.

In total, since the consultation closed nearly a year ago – a point when the Mayor will have known he would have to introduce ballots – he has signed off funding for 34 estates. And 16 of these schemes have been signed off since 1 December when the Mayor and his team were finalising the new policy and gearing up to announce it. I am appalled by this apparently underhand behaviour.

Khan’s office hit back. It told The Canary:

The data shows the total number of schemes that have had funding agreed in the entire time since Sadiq became Mayor. The overwhelming majority of decisions to allocate funding for these schemes were agreed by June last year and the related contracts have been signed in the months following these decisions.

The Mayor published the first ever City Hall guide to estate regeneration in London and is consulting Londoners on mandatory ballots of residents for schemes where demolition is planned because he wants local people to be at the heart of any decisions from the outset.

But it also admitted that Khan had signed off on funding for the 34 regeneration schemes, saying that:

The majority of decisions were made about allocating funding to schemes before last summer, including some commitments by the previous Mayor. The 16 contracts signed after 1 December were for schemes already allocated funding.

Khan: in bed with Labour councils?

Berry, though, has also passed unpublished FOIs to The Canary. These show the information 12 local councils submitted to Khan as part of the Good Practice Guide consultation process, ending last March. They show that, of the 12 councils which responded to the consultation, none supported the principle of a ballot: six made no comment on ballots, and six were against. One of the councils against resident ballots was Labour-led Lambeth.

According to Berry and the FOI documents, it opposed resident ballots – and managed to get Khan to sign off on five of its regeneration plans before February 2018; none of which even have planning permission approved, yet. Berry told The Canary that this means:

No ballots for residents on these estates if the Mayor sticks to his proposal only to require them as part of funding rather than planning decisions.

And as a final ‘slap in the face’ to residents, Berry has also accused Khan of “delaying tactics” in releasing all this information. She officially submitted a written question on this on 22 February, and should have received an answer on 27 February, but didn’t. Berry expects an official written answer today (26 March). But she told The Canary:

I am very disappointed with the delaying tactics the Mayor has used in trying not to admit he was rushing through major schemes like this. Finding out about recent funding deals more than a month after I first asked for this information, and too late to question the Mayor before a long break, is not acceptable.

Labour: saying one thing, doing another

So what does all this mean? In short, it seems to show that Khan and some Labour-led councils in London are saying and doing one thing, while Corbyn is saying and doing another. It seems unfathomable that Khan would not have known that he was going to introduce a policy of resident ballots from as early as March 2017.

So why did he sign off on funding for 16 estate regenerations, six of which he approved [xls] just 10 days before announcing the policy on 2 February?

Berry has her suspicions. She told The Canary:

Things are now looking really bad for the Mayor, and the situation can’t fail to raise questions about collusion.

Whether Khan and Labour councils have been ‘colluding’ or not over regeneration schemes, unfortunately it seems that local Labour is often at odds with the party’s position nationally. This should concern voters in the run-up to May’s local elections; especially if they live in social housing.