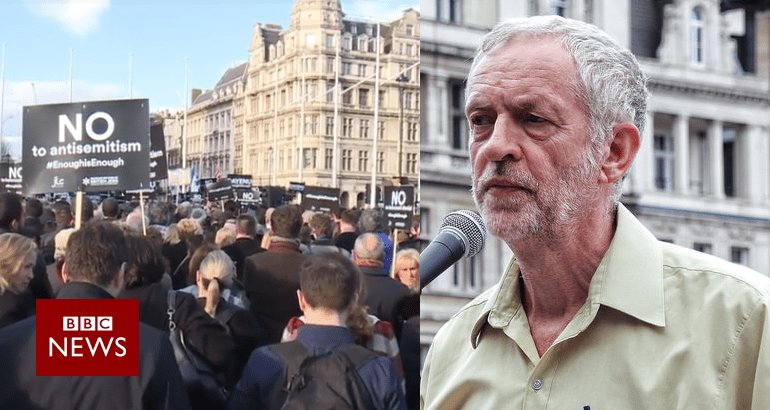 Viewers are complaining of bias at the BBC after the state broadcaster appeared to abandon procedure to smear Jeremy Corbyn.

‘When did the BBC ever flag up an anti-Tory protest?’

People noticed that the BBC has extensively reported on a right-wing protest against Corbyn’s leadership while routinely ignoring larger protests. Viewers say the coverage on BBC News, BBC Newsnight, BBC Radio 4, and in online articles displays a double standard:

On top of the disproportionate coverage on BBC News, people accused the outlet of a one-sided report on Radio 4:

Four minute report on #r4today on Westminster protest yesterday. Only anti Corbyn people interviewed. No mention of counter protest let alone an interview with any of them. No mention of the DUP MPs there or Tories like Tebbit.
The report was paid for by our licence fee #BBCBias

Hope someone is closely monitoring the mischief BBC is making to make a bad situation worse. This morning's Today report deliberately excluded all mention of pro Corbyn Jews who challenged their colleagues. BBC looks out of control. https://t.co/dLMH2UtDku

The Board of Deputies of British Jews organised the protest against Corbyn, accusing him of “siding with antisemites”. Among the attendees were Conservative MPs and Blairite Labour MPs. MPs from the extremist Democratic Unionist Party (DUP), which currently props up Theresa May’s government, were also there.

At the same time, some Jewish Labour members staged a counter-protest. They said that the Board of Deputies “do not represent us or the many Jews in the Party who share Jeremy Corbyn’s vision for social justice and fairness”.

Other viewers claimed that the BBC downplayed the counter protest, which was led by campaign group Jewish Voice for Labour:

While the BBC has covered the anti-Corbyn protest in depth, many accused the state outlet of ignoring huge anti-Brexit protests in major cities only a few days before:

I find it interesting that an anti-Jeremy Corbyn protest outside Westminster is headline news today, yet anti-Brexit protests across every major city at the weekend was not. I no longer trust @BBC with news.

Others alluded to hypocrisy from the BBC and right-wing Labour MPs. They pointed to their lack of action on other anti-racism protests:

Where were all these 'labour' MPs so concerned about racism at last week's Stand up to Racism mass rally on U.N. Anti-racism Day?
And where was the BBC report about those protests?#r4today https://t.co/JS2lEQkngn

Yesterday’s protest formed part of a wider story which included Jeremy Corbyn publicly apologising for the handling of the anti-semitic views of some within the Labour party.

In other words, Corbyn claims he was unaware that the image conveyed the antisemitic trope of an elite Jewish conspiracy theory. To judge whether Corbyn is telling the truth, one must surely look at his record on antisemitism:

Another line of attack is that the Labour Party has a ‘problem’ with antisemitism. But an anti-Corbyn parliamentary committee couldn’t find evidence [pdf, p48] that antisemitism is more prevalent in Labour than other parties. On the contrary, the report also noted [pdf, p8] that “the majority of antisemitic abuse and crime” comes from the far right. Yet only the Labour Party has ordered investigations into antisemitism. There has been no cross-party initiative to stamp out the issue.

Some Jewish Labour members are saying the smears are intended to hit Labour at the local elections. Indeed, The Jewish Chronicle reported that Corbyn commented on the mural back in 2015. Yet opponents of the Labour leader have only kicked up a storm about it now. Meanwhile, polls suggest Labour is on course to take over many Conservative councils. Fearing the precedent that a great local result would set for a general election, those opposing Corbyn will be desperate for ammunition.

Unfortunately for them, the Labour leader has been on the right side of history on many issues since he was elected over 30 years ago, including on anti-racism and LGBTQ rights. So the Labour right, the Conservatives, the media, and supporters of Israeli apartheid must take a single Facebook comment out of context in order to kick up a damaging storm.

And the BBC appears all too eager to help. Viewers are saying the state broadcaster has given the relatively small anti-Corbyn protest hugely disproportionate coverage. With the BBC‘s longstanding record on anti-Corbyn bias, we must say: enough is enough.