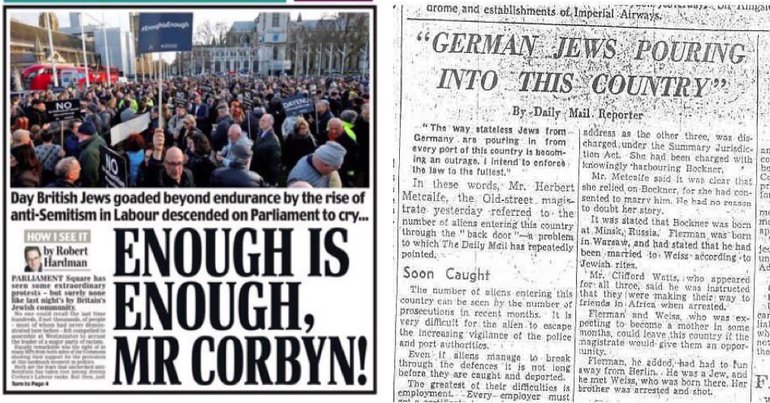 The Labour right has renewed its accusations of antisemitism on the left. And it timed it to do maximum damage ahead of the local elections in May. Worse, the culprits are allowing the Daily Mail to spearhead the assault; a paper which has done more to promote antisemitism, racism and bigotry than perhaps any other.

As a gay, working-class woman of colour, let me tell you this: there are racists, sexists and homophobes in every political movement and party. Labour and the left are no different. But one of the best things about the left is that (in general) people feel a responsibility to identify and challenge their own prejudices. In contrast, the right has historically focused on justifying those prejudices with nationalism, and even eugenics (a racist pseudo-science). This is why seeing the Daily Mail front page today should make every genuine anti-racism campaigner sick to their stomach. 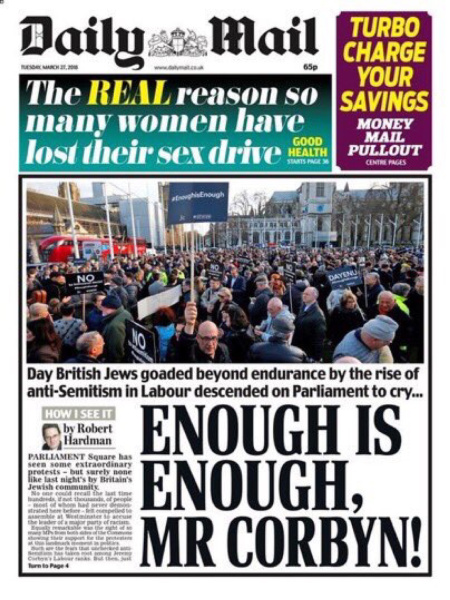 To those outside the tiny Westminster clique promoting the smear, it was further evidence that the accusations were less than authentic.

As the progeny of a Jewish family I couldn't be more stunned at 2018 Britain. The Daily Mail & its racist, anti-semitic history has the gall to hop the wagon. It sums up everything that's wrong with this co-ordinated, politically motivated attack on Jeremy Corbyn. #EnoughIsEnough pic.twitter.com/CfUPF87TK6

The Daily Mail & Iain Paisley enthusiastically backing #enoughisenough. If only we could all be as tolerant as them. ?

Jeremy Corbyn is the man who campaigned against apartheid in South Africa, against the Nazi National Front marching in Britain & for refugees & asylum seekers on the same day he was first elected Labour Leader. For people to call him an anti-Semite is despicable #EnoughIsEnough

And media campaign group Jewish Voice gave a view from the Jewish left on the issue.

The Daily Mail going after Corbyn is a tough choice for us. Do we pick the newspaper who backed the Nazis or the guy who would've been on the barricades with us fighting the Fascists at Cable Street?

Today we've seen something new & very nasty. Non-Jewish people (mostly Tories) telling Jewish people (who support Corbyn) that they're Anti-Semitic. In other words Non-Jews condemning Jews as Anti-Semites. What a horrible state Britain is in 2018 #EnoughIsEnough

Lot of Labour Moderates speaking out about Corbyn and the Mural. Irrelevant. They have to answer one question. "Will you campaign for him to become Prime Minister?". If the answer is "Yes", then there is no ambiguity. They are complicit in normalising anti-Semitism.

Eventually, the decent people in Labour have to realise that tweeting or writing a letter about how disappointed and angry you are isn't good enough. He is your leader. You advocate him governing our country. Like it or not, this is what, by association, you stand for.

“I regret I did not look more closely at the image.” This is the “I’m just a fucking moron” defence. That may be true, but no one can seriously believe anything other than he saw nothing wrong with publicly displaying an obviously antisemitic image. The rest are weasel words. https://t.co/q6vabmFoCx

The UK right is bursting with racism; no need to dig up years-old Facebook miscommunications to prove that. We have Prince Philip earning a lifetime achievement award for services to jingoism. Foreign secretary Boris Johnson can speak about the “watermelon smiles” of African people, and assert that Barack Obama was “part-Kenyan” with an “ancestral dislike” of Britain. Arch-Brexiteer Jacob Rees-Mogg can dine with and toast the far-right Traditional Britain Group. The president of the group was recorded calling for “voluntary repatriation” of Black Britons, and saying of broadcaster Vanessa Feltz:

Much of the time, the Daily Mail asked us to give such bigotry a free pass. Yet Jeremy Corbyn, a man who has committed himself to anti-racist movements his entire life, is the one being called a racist. And it’s not the only hypocrisy on display today.

A history of promoting hatred

Hours after the Manchester concert bombing on 23 May 2017, the Mail ran the cartoon below. It depicts a couple hiding behind their curtains, as two gun-carrying terrorists walk up their garden path. It carries the text: “Oh dear: Will you answer the door? I think they’re canvassing for Jeremy Corbyn.”

And how did the Daily Mail respond to the migrant crisis? With another cartoon by ‘Mac’ or Stanley McMurtry. The chillingly racist drawing depicted refugees as marauding soldiers, running into Europe alongside rats. The implication being, they are one and the same.

The shadowy, caricatured features, the suggestion of vermin-like character. It all seemed very reminiscent of the sort of propaganda we have seen from some of the worst regimes in history, as one Twitter user pointed out.

While we’re at it, how did the Daily Mail treat Jewish refugees of the Nazi holocaust at the time? In 1938, as the Jewish population of Germany began fleeing Hitler, this was the welcome they received from the Daily Mail.

Not only did the Daily Mail propagandise against the incoming Jewish families, but they spent years cheerleading for fascism in general, and Hitler in particular. In 1934, the paper’s owner Viscount Rothermere wrote an editorial personally inviting Britons to embrace both.

But what’s even worse is that people who should know better are weaponising the very real problem of antisemitism for political point-scoring. There is a duty on us all to engage in conversations about racism in good faith. The minute we stop doing that, we pollute the space. In doing so, we make it ever harder to have these urgent and important conversations. And it’s not the largely white, middle-class commentators inside the Westminster bubble who will suffer the aftermath. It will be the Jewish, Black, Brown, Gay and similarly ‘othered’ groups who take the heat. The ones who never asked to have their lived experience exploited by a self-serving establishment.