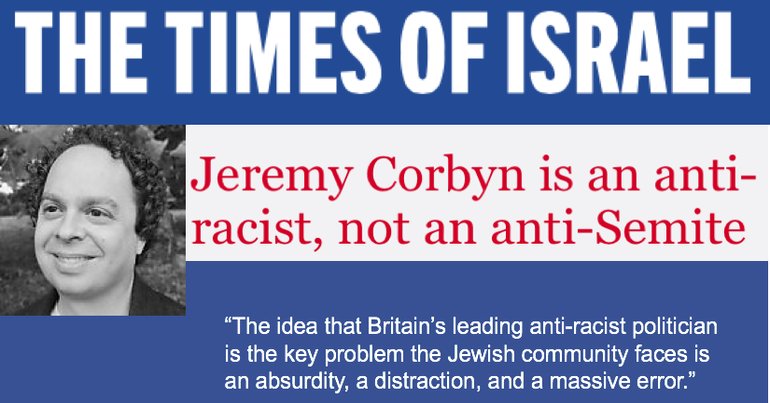 A prominent Jewish author has debunked the bogus antisemitism smears against Labour leader Jeremy Corbyn, in The Times of Israel. It is probably the most powerful dismantling of the smear campaign yet, stating unequivocally that it “is an absurdity, a distraction, and a massive error.”

The anatomy of a smear campaign

Joseph Finlay is the former deputy editor of the Jewish Quarterly and co-founder of a range of grassroots Jewish organisations. On 26 March, he penned a piece for the UK partner of The Times of Israel entitled Jeremy Corbyn is an anti-racist, not an anti-semite.

Finlay writes that, like every good story, it starts with a grain of truth. Among Labour’s half a million members lies a small minority of people who hold antisemitic views. But this truth, he writes, was turned into “a dark guilt-by association sub-plot” with the cynical “grand finale” we should all have expected:

It is no longer just that the leadership of the Labour Party has been soft on antisemitism – Jeremy Corbyn himself is, drumroll, an antisemite! Now the villain of the tale has finally been unmasked the coda is inevitable – Jeremy Corbyn will be forced out, the Blairites will return to great fanfare, and everyone will live happily ever after in a centrist Eden.

This story is now out of control. It is distorting, rather than helping us understand reality.

Finlay points out that, while authors of the smear wish to portray Corbyn as an antisemite, reality says otherwise:

Jeremy Corbyn has been MP for Islington North since 1983 – a constituency with a significant Jewish population. Given that he has regularly polled over 60% of the vote (73% in 2017) it seems likely that a sizeable number of Jewish constituents voted for him…

He is close friends with the leaders of the Jewish Socialist Group, from whom he has gained a rich knowledge of the history of the Jewish Labour Bund, and he has named the defeat of Mosley’s Fascists at the Battle of Cable as a key historical moment for him. His 2017 Holocaust Memorial Day statement talked about Shmuel Zygielboym, the Polish Bund leader exiled to London who committed suicide in an attempt to awaken the world to the Nazi genocide. How many British politicians have that level of knowledge of modern Jewish history?

The evidence is in Corbyn’s record of voting and protesting against racism. While Corbyn was being arrested for protesting Apartheid South Africa, the Conservative Party was calling for Nelson Mandela to be hanged as a terrorist. Finlay asks:

Who do you put your trust in — the people who hate antisemitism because they hate all racism or the people (be they in the Conservative party or the press) who praise Jews whilst engaging in Islamophobia and anti-black racism? The right-wing proponents of the Labour antisemitism narrative seek to divide us into ‘good’ and ‘bad’ minorities — they do not have the well being of Jews at heart.

The danger of buying into the smear

In his concluding paragraphs, Finlay highlights the dangers of allowing the right to hijack antisemitism for its own ends. He calls on us to “return the story to the facts”. The Labour Party has a small number of antisemites, and on discovering them, it expels them. But:

If the Conservatives took the same approach to racism they would have to suspend their own foreign secretary, who has described Africans as ‘Picanninies’ and described Barack Obama as ‘The part-Kenyan President [with an] ancestral dislike of the British Empire’. From the Monday club, linked to the National Front, to MP Aidan Burley dressing up [as a] Nazi, to Lynton Crosby’s dogwhistle portrayal of Ed Miliband as a nasal North London intellectual it is the Conservative Party that is deeply tainted by racism and antisemitism.

There are many threats to Jews – and we are right to be vigilant. These threats come primarily from resurgent nationalism, anti-immigrant sentiment and a Brexit narrative that seeks to restore Britain to a mythical age of ethnic purity. The idea that Britain’s leading anti-racist politician is the key problem the Jewish community faces is an absurdity, a distraction, and a massive error.

It’s time to listen to Jewish voices on the left

Ultimately, it’s time to listen to Jewish voices on the left. Because it is these voices that carry the most authority on the issue. And they are speaking loudly right now, if people would only listen.

As the progeny of a Jewish family I couldn't be more stunned at 2018 Britain. The Daily Mail & its racist, anti-semitic history has the gall to hop the wagon. It sums up everything that's wrong with this co-ordinated, politically motivated attack on Jeremy Corbyn. #EnoughIsEnough pic.twitter.com/CfUPF87TK6

Today we've seen something new & very nasty. Non-Jewish people (mostly Tories) telling Jewish people (who support Corbyn) that they're Anti-Semitic. In other words Non-Jews condemning Jews as Anti-Semites. What a horrible state Britain is in 2018 #EnoughIsEnough

Like hundreds of British Jews, I joined the @UKLabour BECAUSE of @jeremycorbyn our best chance to end the politics of punishment by austerity.
"To be a Jew means always being with the oppressed and never with the oppressor"

Marek Edelman, a leader of the Warsaw Ghetto Uprising

There should be no place to hide in Labour for people who promote antisemitic views. But to pretend that the party is the natural home of racists is, as Finlay states, “nonsense”. It’s time for a zero-tolerance approach to the cynical weaponisation of Jewish trauma for political ends. It is never OK to hijack a community’s lived experience to deploy against political foes. Never.

Featured image via Times of Israel