REMINDER: Israel put up a £1,000,000 bounty for Labour insiders to undermine Corbyn - Canary 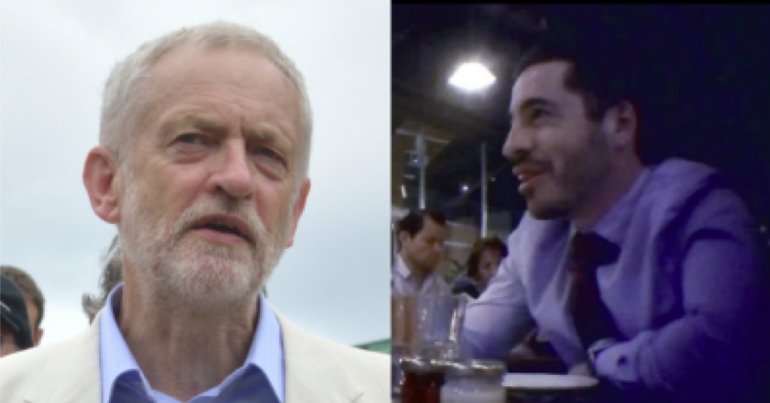 We originally reported this story in January 2017. We are reposting it now as it bears re-reading in light of the current antisemitism row.

The second release from Al Jazeera‘s undercover sting operation on key members of the Israel lobby in Britain revealed a £1,000,000 plot by the Israeli government to undermine Labour Party leader Jeremy Corbyn.

The Al Jazeera investigation took place over several months in 2016, with an undercover reporter becoming a trusted confidant of Israeli diplomat Shai Masot. The reporter filmed key conversations among Masot and British political allies over the summer, revealing a network of pro-Israel organisations committed to ‘taking down’ UK politicians who attempted to defend Palestinian rights.

The first revelation caught Masot and British civil servant Maria Strizzolo. Masot was a senior political officer at the Israeli embassy in London, with diplomatic immunity. Strizzolo is the former parliamentary assistant to Robert Halfon, a junior education minister and former deputy chair of the Conservative Party. After Strizzolo brags about elevating Halfon from backbencher to government minister, and planting a pro-Israel question in parliament through him, Masot asks if she is as effective at taking anti-Israel politicians down as building pro-Israel politicians up.

Masot: “Can I give you some MPs that you can take down?”

Strizzolo: “Well you know, if you look hard enough I’m sure that there is something they are trying to hide.”

Strizzolo: “Let’s talk about it.”

Masot (to AJ reporter): “No, she knows which MPs I want to take down.”

Masot (after Strizzolo asks for a reminder): “The deputy foreign minister.”

This is a British civil servant proposing the take-down of serving UK government minister Alan Duncan, at the request of a foreign diplomat. The Conservative government responded by accepting an apology from Israeli ambassador Mark Regev, and stating the matter is “closed”.

Sadly for the government of Theresa May, the story is going nowhere. The second release now shows that not only was Israel interfering in the matters of UK government, but also Her Majesty’s Opposition.

In secret conversations filmed by an undercover reporter, Shai Masot, a senior political officer at the Israeli embassy in London, described his plans to set up a youth wing of the Labour Friends of Israel (LFI) organisation and revealed that he had set up other organisations in the past.

Masot described taking delegations of Labour members on trips to Israel and told Joan Ryan, the chair of LFI, that he had he had been approved £1m ($1.2m) to fund further visits.

He also said he had set up a group called ‘The City Friends of Israel’ in collaboration with AIPAC, an influential pro-Israel lobbying organisation in the US.

Describing Labour leader Jeremy Corbyn as ‘crazy’, Masot said he had set up a youth wing of the Conservative Friends of Israel in 2015 and wanted to do the same inside the Labour Party, but had been unsuccessful because of the ‘crisis’ surrounding Corbyn’s election as leader.

Masot also described Corbyn’s supporters as being ‘weirdos’ and ‘extremists’.

Masot complained that, under Corbyn, the Labour Party had been harder to influence – and therefore the establishment of seemingly independent pro-Israel groups within the Labour Party was required to undermine the leadership. This conversation took place at the Labour Party conference in 2016, shortly after the unsuccessful Labour coup.

Like Masot’s earlier target Alan Duncan, Labour leader Jeremy Corbyn has supported the Boycott, Divestment and Sanctions (BDS) movement that is creating real consequences for Israel’s continued occupation of Palestine. Pro-Israel politicians across Europe and the Americas have been working to make criticism of Israel synonymous with antisemitism, and outlaw the BDS movement. In short, to prevent freedom of speech and freedom of custom.

Israel threw its diplomat under the bus immediately, confirming that Masot would be leaving his post shortly. Strizzolo was also forced to resign. But despite evidence of a network of organisations and political operatives working to undermine British democracy, the May government stated that this matter was closed.

May faced stiff opposition from all quarters to reverse the decision. Labour leader Jeremy Corbyn called for a full inquiry into the role of Israel in UK politics, and he was backed by the Scottish National Party and several high-profile Conservative MPs. Labour’s shadow foreign secretary Emily Thornberry said:

The exposure of an Israeli embassy official discussing how to bring down or discredit a government minister and other MPs because of their views on the Middle East is extremely disturbing.

Improper interference in our democratic politics by other states is unacceptable whichever country is involved. It is simply not good enough for the Foreign Office to say the matter is closed. This is a national security issue.

The embassy official involved should be withdrawn, and the government should launch an immediate inquiry into the extent of this improper interference and demand from the Israeli government that it be brought to an end.

Crispin Blunt, the influential chairman of the parliament’s select committee on foreign affairs and also a target of Masot’s campaign, said:

What we cannot have is Israel acting in the UK with the same impunity it enjoys in Palestine.

This is clearly interference in another country’s politics of the murkiest and most discreditable kind.

This ranks as the equivalent of Soviet intelligence in what they are doing to suborn democracy and interfere in due process.

In weeks where the US expelled 35 Russian diplomats over a conspiracy for which intelligence services were yet to produce any tangible evidence, the UK government’s servile response to the undeniable mendacity of the Israeli government was utterly breathtaking. In a statement sent to The Canary, Jewish campaign group Free Speech On Israel says that the covert meetings between Israeli official Shai Masot and Tory and Labour politicians, revealed in the investigation by Al Jazeera, are evidence of a concerted campaign to undermine pro-Palestinian currents in both parties:

These latest revelations vindicate the case that Free Speech on Israel has been making for many months. There can now be no doubt: Pro-Israel advocates in the UK have been working with representatives of the Israeli state to undermine their political opponents…

The full story of the corrupt relationship between the Israeli government and British politicians must come out into the open. And Ambassador Regev, who has presided over this infiltration policy, needs to be told that he is no longer welcome.

The UK government just last month said it would adopt a highly politicised ‘definition’ of antisemitism favoured by pro-Israel lobbyists. Disturbingly, Labour supported the move. This looks more and more like the handiwork of pro-Israel sympathisers among UK policy makers. A spotlight needs to be shone into these dark corners of our political system.

The Al Jazeera series began on 15 January 2017, and exposed the depths of complicity between pro-Israel political operatives in the UK and the services they provide for the Israeli state.

Around 80% of Conservative MPs are members of Conservative Friends of Israel, including prime minister Theresa May. Meanwhile, there is significant crossover between members of Labour Friends of Israel and the right wing of the party that participated in the coup against leader Jeremy Corbyn. They include Chris Bryant, Michael Dugher (who deputy leader Tom Watson tasked with leading Labour’s ‘fake news’ inquiry), Jim Murphy, and Rachel Reeves.

It is notable that, while the mainstream media sang in orchestral outrage over the allegations of Russian hacking in the US election, there was near silence, or contemptuous dismissal, of these proven acts of political manipulation by Israel.

– You can contact your local MP to demand an inquiry.