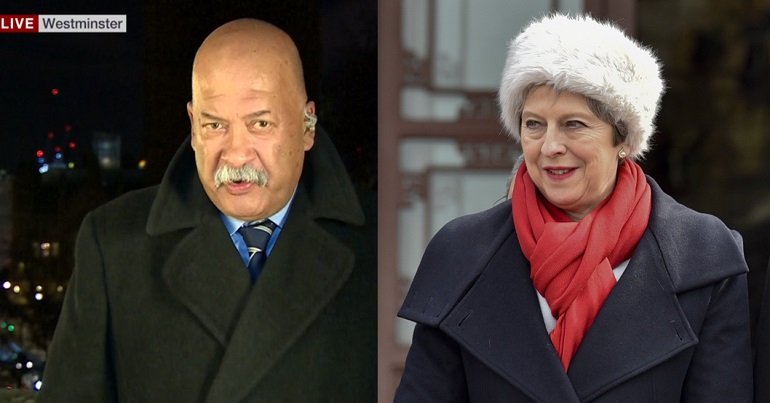 A senior BBC journalist’s comments about Theresa May moved from fact into the realms of bizarre, unfounded, and unprovable opinion on Tuesday 27 March; ironically, the day before the public service broadcaster outlined its plans [paywall] to help tackle ‘fake news’ in schools.

BBC deputy political editor John Pienaar was giving his analysis of the government’s plans for “multi-year” funding for the NHS. May outlined the plans in front of the Commons liaison committee, although she would not give details of how much money would be involved.

Host Huw Edwards asked the deputy political editor what his “reading of the thinking behind this” was.

So, what impartial view of the PM’s plans did Pienaar give? Was it unbiased, fact-led analysis of her liaison committee grilling? Did he tell the viewer the bare bones of the story?

Theresa May, who clearly means it when she says she’s a supporter of the NHS…

He went into full-blown sob story mode after this, stating that May was under “enormous pressure” from medical professionals, the public and MPs. If you would like to purchase the world’s smallest violin, please follow this link.

It’s unclear how Pienaar got this exclusive about May’s deepest-held beliefs on our health service. Maybe he has a second job as the PM’s private therapist. Or perhaps he’s secretly a mind reader. But social media was less than impressed with his comment:

'Well, Theresa May clearly means it when she says she's a supporter of the NHS…'

Coverage that wouldn't stand come the weekend, when we enter the pre-election period. #NHSCrisis #newsnight pic.twitter.com/L2OruG3MMh

@JPonpolitics How do you know Theresa May "REALLY cares about the #NHS"? You've reached an opinion. It's not for you to make such a claim, it's for each viewer to decide what we think. It's not the first time you've said this. 20 months in office, she's done nothing for the NHS.

No surprise to hear John Pienaar #BBCNewsTen bigging up Maggie May regarding @NHSEngland funding. #BloodyTories

Pienaar’s mind-boggling comment came the day before the BBC was set to outline [paywall] its fake news unit. The public service broadcaster will be visiting up to 1,000 schools to teach our children how to spot fake news. Just a thought, but perhaps it could start by using its own deputy political editor’s comment about May. Because it’s really hard to believe she “supports” the NHS when her party has presided over a perpetual crisis in it. As Faiza Shaheen from the Class thinktank noted:

Tories create a problem and then want us to be grateful when they say they’ll fix it (in part). How short do they think our memories are?!#stopthecuts #austerity https://t.co/xlPLRI0YRz

But did Pienaar’s personal view on May’s feelings about the NHS breach BBC editorial guidelines? While the guidelines do “not require absolute neutrality on every issue or detachment from fundamental democratic principles”, they do state:

The BBC Agreement forbids our output from expressing the opinion of the BBC on current affairs or matters of public policy, other than broadcasting or the provision of online services.

It’s staggering that the deputy political editor of BBC News dropped a wholly emotive and opinion-led statement about the PM’s views on the NHS just weeks before the local elections. This journalist can call Pienaar’s comments “staggering” because it’s my view – but ultimately because my professional output is not paid for by the public through the licence fee, and nor is it governed by a Royal charter.

The BBC says it’s an “impartial purveyor of news and programming”. But many would consider the public service broadcaster to have given up on that years ago; and Pienaar’s preposterous statement just highlights the issue.