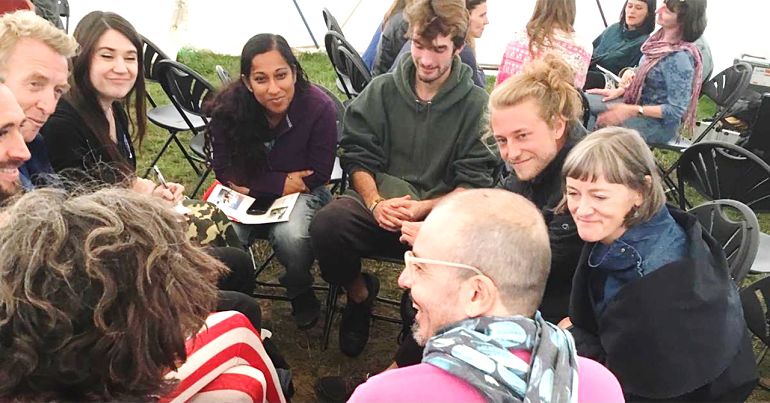 In a tent at the Byline Festival in East Sussex, people came together to experiment with direct democracy and produce a Bill, a statement, a manifesto for change. The Canary was there and spoke to some of the people involved. Byline is a gathering with its roots in journalism but spreading into wider spheres of creativity and political activism. Part of the festival was an exercise in direct democracy, exploring decision-making processes to address major issues.

Over three days, people gathered in assemblies to discuss the state of the UK. Jamie Kelsey Fry helped co-ordinate the assemblies and told The Canary about the process:

Firstly, consider what values the British people want to stand for. In the second assembly we started getting people to nail down what they thought were the main areas that urgently need change in the UK. The third assembly built on that process.

You’ve got to bear in mind that we’ve only had three assemblies here, over three days. And the actual bits where people were talking to each other… they were 15 minutes long. So [the Byline Bill] was comprised by [in total] about 200-250 people that participated in this conversation.

The whole point is to show how easy it is for us to come together and realise we’re on the same page… it’s to do with all of us being aware of the fact that there’s such an urgent crisis, that the current political system doesn’t have a hope of addressing.

The ideas the assemblies produced were put into an online platform that allows participants to upvote or downvote and comment on them. This software played a crucial role in Iceland after the financial crash. Birgitta Jónsdóttir was at Byline to co-ordinate the assemblies and explained to The Canary how things worked in Iceland:

I’m first a poet, then I’m an activist and then I sort of accidentally created a political movement and got into parliament (to my great shock). Then I also created another political movement because the first one was a hit and run and I left politics because I don’t believe that change can happen inside parliament – it needs to happen outside with the people, totally bottom-up initiatives.

[In Iceland] we were blessed with the mother of all crises in 2008 – we had the fifth largest financial meltdown in human history. We’ve come out of it quite neatly but it really woke up Icelanders. Before that they were just like you here in Britain – you know, like: ‘things are too complicated, we can’t change anything, blah, blah, blah’. But come on, that’s a bad bad excuse for not doing stuff.

We came to the realisation in Iceland that, during times of crisis, bad people put through bad legislation to take rights away from people. So maybe we could use the crisis to do the opposite. We came to the conclusion that we needed to write a constitution by and for the people of Iceland. [The process] included randomly selecting an assembly of people that would come and sit together for a few days and discuss, you know: ‘Who are we as a nation? What are our values? How do we want that to be expressed in our highest law? How are we going to make the social agreement reflect our true values?’.

And after that there was a plan to elect a constitutional parliament. And there was a bit of a problem because so many people wanted to be part of it. And actually it ended up being a grassroots initiative to contact everyone that decided to run. We had a national referendum on the final product and what they did, they totally opened it so that anybody who wanted to give an input, like we’re doing with the Bill of Wrongs, with the online platform, anyone that wanted to give a suggestion for improvements to an article or felt that something needed to be added to the new constitution could…

[The platform] is totally scalable. We can have massive organisations that break down into different focuses and departments. So this program is actually so cool because it’s so easy to scale it up and it’s so easy for it to be inclusive… There are endless possibilities to develop direct democracy on so many different issues… You can use it for so many different things to find a consensus and a collective vision for a nation that’s broken.

Róbert Bjarnason, president at the Citizens Foundation, developed the platform and said:

The Bill of Wrongs crowdsourcing of the UK constitution ideas at Byline festival is an exciting example of a simple bottom-up process with the potential to reach a diverse audience. The open source debate platform gives space for both sides of the argument for each constitution idea, potentially bringing in all the different voices and gives people the opportunity to learn from each other.

Stephen Colegrave set up and runs Byline with Peter Jukes. Colegrave told The Canary how the festival came about:

Peter got very incensed about the press when he started covering the phone hacking thing and really decided to put on hold a successful career as a writer and playwright… And we’d been having a conversation about there being something weird about the world. It was after Trump and after the Brexit referendum and we had a feeling that somehow, unknowingly, we’d fallen down some sort of rabbit hole and the world was somehow darker and there was a feeling of foreboding that perhaps we were going somewhere the world had gone before and that things like democracy were really under threat.

So this was a really simple idea this festival, which was to get 5,000 people together in the forest… all you’ve got to do is create a space for them. Give them a space, get enough people together and they will start to create things. We think that the fourth estate – journalism – should be the bastion of democracy. And it’s sort of the hamster of democracy.

Things like the Bill of Wrongs are so important to us – the idea that we can go through this festival and have an output… where we can start to articulate what ‘good’ should look like, so that people don’t just sort of sleepwalk into a situation where democracy’s threatened. People begin to realise what they should be cherishing and get that down on a piece of paper. That’s why I was blown away by this idea.

At the end of the process, the top ideas were written into the ‘Byline Bill’. Artist Gavin Turk created a replica Ten Downing Street door and nailed the Bill to it.

People who participated in the assemblies also said that they found listening needed to be valued over speaking. Festival speaker John Cleese echoed this when asked about what change he would like to see, saying: “I would most like see people change their conviction that they know what is right”.

Well, for now, people who took part in the Bill of Wrongs feel they’ve come up with some good plans. But crucially, they’ve learned about making decisions in a way that really gives power to the people.

– Join in the discussion on the platform here.