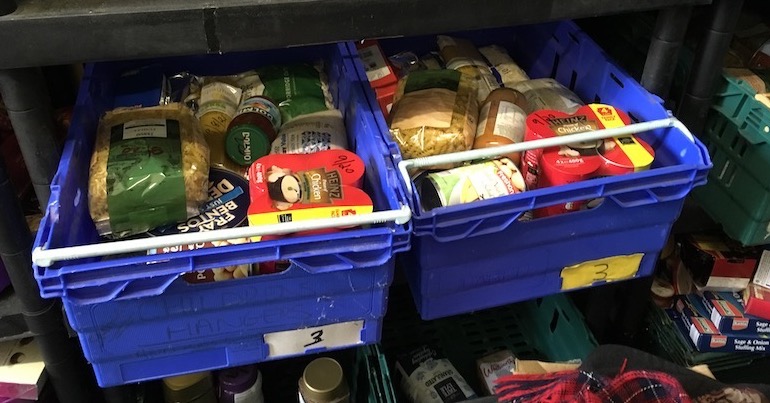 he Canary has been speaking to real people on the ground at foodbanks and street homeless projects in Cornwall. 17 neighbourhoods in the county “are among the most deprived (worst 10%) in England”. In 2016, over a quarter of Cornish children were identified as living in poverty. Cornwall also has the third highest rate of homelessness in the country, and it faces the specific challenges of rural deprivation and poverty.

It’s bitterly cold in Cornwall, and John* has just cycled three miles to a foodbank in Camborne. The Camborne and Redruth area “has the highest number of neighbourhoods in the most deprived 20% in England”. A slow and steady trickle of people know that the side door to the so-called ‘pink church’ leads to the Camborne foodbank. Donovan Gardener has been running this independent foodbank for ten years. He told The Canary that in the past three months, they’ve provided nearly 16,000 meals.

John loads a rucksack with enough food to keep his family going for six days. As he gets ready to cycle home in the biting wind, he explains that he’s here because of one reason and one reason only: Universal Credit.

“I don’t have a computer”

John works six days a week. But with a family to support, it’s not enough. His income used to be topped up weekly with Working Tax Credits, Child Tax Credits and Housing Benefit. Once Universal Credit rolled out in Cornwall, these benefits stopped. That’s when the problems started, because:

it’s five weeks until you get paid again. Then they give you a month’s money which has to last you for the month after that. So I don’t know where the other month comes from but you don’t get it.

There’s another big problem, one that many people across the UK face. John’s “rent is due every week”. As a result, he’s been battling eviction letters. “There’s no such thing as Housing Benefit any more,” he explained, “so people on low income can’t get any Housing Benefit now, because of Universal Credit”. He said trying to resolve this issue with the council “wasn’t a straightforward process”. And applying for Universal Credit wasn’t straightforward either:

It took me about four to six weeks to actually apply… because you can only do it online. I don’t have a computer and when I went to school we didn’t learn how to use computers. So in between working six days a week, I’ve had to actually learn how to use the computer and navigate their system – which isn’t the easiest in the world – and then you have to wait weeks before you get any help.

John is 53. To apply for Universal Credit you need an email address. “I’ve never had one of those in my life,” he said. “You have to learn how to use that,” he continued, “and it’s an absolute nightmare of a system”.

In November, Philip Alston – the UN special rapporteur on extreme poverty and human rights – concluded an investigation into the impact of austerity and rising levels of poverty in the UK. One of the key areas of criticism was the “digital by default” nature of Universal Credit. He warned of the “immense” impact this has “on the human rights of the most vulnerable in the UK”.

This is John’s second trip to the foodbank. “The people are lovely,” he said. But, he continued:

it’s very demeaning when you’re working six days a week and you can’t afford to feed your children and can’t afford to pay the rent on time because your payments have been changed from weekly to monthly. It makes you feel quite low. The people are lovely, but I don’t think they should have to do this. But I need it. Because I can’t manage without it.

Under this government, over half a million more working people tipped into poverty in the last five years. There are now four million working people in poverty. Although many people believe Universal Credit should be abolished, John sees one immediate solution until this happens: if Universal Credit were simply paid on a weekly basis.

“No help for Christmas”

John explained that his next payment isn’t due until 30 December, “so that’s no help for Christmas”. He’s still battling to catch up with a backlog of unpaid bills. Without the foodbank, he says, “we’d have nothing, we’d never have managed”. But even getting there is far from simple. To get to the foodbank, he needs to collect vouchers from the jobcentre. He can’t afford to run a car, so this means:

A six mile to-and-fro bike ride for me. Then it’s six miles in the opposite direction to come here to get the food so I’ve got a twelve-mile trip and the last three miles of it I’m carrying all this lovely food that people have donated. The bus is £4.50 for that journey, well I can’t afford that.

In Cornwall, many people in rural communities rely on public transport. First Bus – who operate most services – reported profits of £317m in 2018. But John can’t afford the bus fare. So he pulls on his rucksack and heads out in the cold to cycle home.

*Name has been changed