Thanks to a Hull hotel, 28 homeless people may be on the streets this Christmas - The Canary 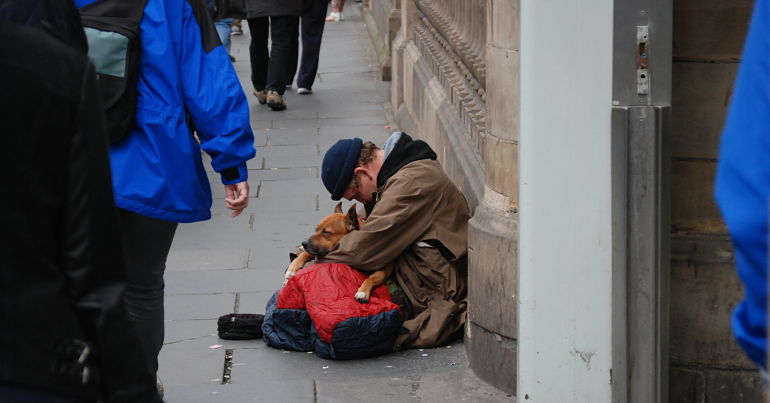 A Hull hotel has come under fire after cancelling a booking made for 28 homeless people over Christmas. The booking was made by Raise the Roof Homeless Project at the Royal Hotel, Hull costing £1092 for 14 twin rooms for two nights. The hotel, which is part of Britannia Hotels Ltd, cancelled the booking with “no reason given”:

After booking a hotel, paying in full and telling them it was for the homeless to stay there over Xmas which they was fine with, we've just had booking cancelled with no reason given so close to Xmas. #discrimination #homelessness #Homeless pic.twitter.com/sWJ80XqwT1

Carl Simpson, the project’s founder, said on Facebook he was “gutted and very angry” about the booking being cancelled.

“We need a miracle”

Because of the cancellation, it is looking likely that a further 28 homeless people will be sleeping on the streets this Christmas because Simpson is yet to receive his refund. He said on Facebook that “we need a miracle” to be able to secure and pay for an alternative venue.

As reported by the BBC, Simpson wanted to recreate “the success of last Christmas” when he booked 28 people into an Ibis for two nights. Simpson told the BBC:

After the stay they were so grateful. Some left staff gifts using the very little money they had, and one asked if he could vacuum the rooms to show his appreciation. This means the world to homeless people. Last year we had tears of joy from someone who stood on the edge of the Humber Bridge the night before.

We have to break the news to people that the hotel has been cancelled.

As of 17 December, no-one from the Royal Hotel Hull was available to give comment to a number media outlets.

People on Twitter reacted with fury after the story broke. Writer and welfare blogger Alex Tiffin stated the action of the hotel reflected “Britain 2018”:

The Royal Hotel in Hull has cancelled without reason, 14 twin rooms a charity paid for to house homeless people on Xmas.

No refund given yet so they can't rebook elsewhere.

The Britannia Royal Hotel in Hull. Remember the name of this place because they have just cancelled a paid booking for nearly 30 homeless people to have somewhere to stay on Christmas Day. No reason given. Whoever made this decision should hang their head in shame.

@BritanniaLtd absolutely disgusting that you cancel a booking for 28 homeless people at the Britannia royal hotel Hull. these people deserve a bed for xmas and the charity had paid in full. I hope this comes back to bite you in the arse #scrooge #grinch #homeless #xmas #bastards

… 😧😳🤯🤬
For SHAME #royalhotelhull and #britanniahotels … !!Disgraceful & Horrifying behaviour. They paid, a lot, Fair and Square.

The BBC‘s Victoria Derbyshire is looking for people that can help:

Dear hotel owners in and around Hull – CAN YOU HELP WITH THIS ONE? Let me know https://t.co/ir9ERY5QPt

#Bridlington Town manager Curtis Woodhouse is offering to help 28 homeless people by opening up his gym – after a #Hull hotel cancelled their Christmas booking without a reason.

The Hull-based charity Raise the Roof has been looking for somewhere else they can spend Christmas. pic.twitter.com/8Bxhd86lmL

The Royal Hotel Hull and Britannia Hotels Ltd are rightly being called out for their actions. But the onus is on us all to remind those in power about the homelessness crisis which has swept the UK and demand they tackle it.

Let us also hope that Simpson and those at Raise the Roof Homeless Project in Hull will find an alternative venue for the 28 homeless people.