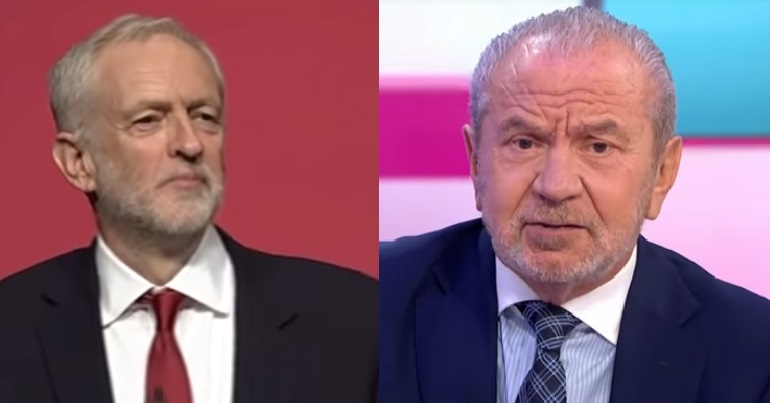 Alan Sugar has taken his meltdown over a potentially imminent Jeremy Corbyn government to the point of parody. The billionaire began his latest intervention by repeating an earlier threat to leave the UK should Corbyn become prime minister. Five days later and Sugar is still voicing his concern on social media:

I hear that @Kevin_Maguire the Daily Mirror guru and arch Labour supporter Marxists and Trotsky communist . Offers to drive me to the airport when I leave if @jeremycorbyn gets to power. You IDIOT no one will be allowed cars it will be elitist

Sugar’s caricature of a Corbyn government may seem utterly ridiculous, but some people actually believe this stuff. For example, political editor of the Sunday Times Tim Shipman deleted a tweet during the 2017 election calling Corbyn a “terrorist loving commie”.

In reality, working for the Daily Mirror, as Kevin Maguire does, hardly makes someone a Marxist, nor necessarily a Corbyn supporter. In fact, the Daily Mirror joined the Labour right, the Conservatives and the corporate media’s coup against Corbyn in the summer of 2016 with a front-page urging him to “GO NOW”.

Labour will actually be better for business

We can assume Sugar must be trolling about Corbyn banning cars in his tweet to Maguire. Although to be fair, it’s not far out of line from his other comments.

Sour grapes you bunch of jealous anti enterprise anarchist losers. You have not achieved anything in life but like to criticize those who have. I paid a personal tax bill last year of over £50m enough to build a hospital. You find the taxes in future I'm off #corbynout https://t.co/yHBeXat0BI

But the opposite is true. Under Corbyn, lower and middle earners will have more money and therefore more spending power. That brings about a greater demand for products from the public. Inequality is presently so polarised that the majority of people have little purchasing power.

Also, Labour’s proposals for public-sector energy, housing, transport, and water will reduce costs for businesses. Rather than businesses having to rent their energy from the Big Six at ridiculously high prices, for example, they will have access to cheaper and sustainable energy through Labour’s roll-out of local renewable energy firms. In short, Labour’s plan to take shareholder profit out of our public services will reduce costs for everyone except the monopolies currently renting them out.

Sugar is wrong on another level too. Governments do not need taxes to fund spending. As the money creation after the financial crash demonstrated, governments can create money for investment. Known as ‘quantitative easing’, the Bank of England issued £445bn of new money in 2010. But instead of investing the funds in the real economy – on education, housing, etc – the bank pumped the funds into financial markets.

Labour’s proposed national investment bank can create money for calculated investment in services and people. We hardly need Sugar’s tax bill, which he depends on workers and public services to generate anyway.

Here’s a selection of Sugar’s other outbursts over the past few days:

You mean a cheap way to get losers and non achievers who are jealous of those who prosper to vote for you Marxist bunch . Jealousy is an illness and you lot are sick. Make this you party theme in future https://t.co/nj1cLLlq0d https://t.co/XPpjyylnfg

This tweet tells it all folks . They admit it’s because I am rich . I told you a bunch of losers and jealous non achievers https://t.co/jPd4PwAPkF

I am insulting loosers like you who by the way start of by insulkting . I am not going to sit back and take sh.. from ignorant jealous idiots ,you included . So pi.. off https://t.co/6o9p2O5mGJ

In response, many on social media mocked Sugar:

Alan Sugar “fears for his grandkids” if Corbyn becomes PM hahaha, the man is a fucking billionaire, can jet them off anywhere on the planet at the click of his fingers. I fear for nurses who have to use foodbanks after a 12 hour shift you absolute tit @lord_sugar

The incentive to win has never been greater.

It should be clear to everyone: Sugar is a billionaire afraid of change. But Corbyn’s policies only seem radical in the context of a society that free-market dogma has dominated for 30 years. The idea that Labour supporters are ‘anti-business’ and that we need to rely on rich people for public investment are both myths.