While all eyes were on the Brexit vote, an important Kurdish solidarity event was held in City Hall - Canary Workers’ Co-op 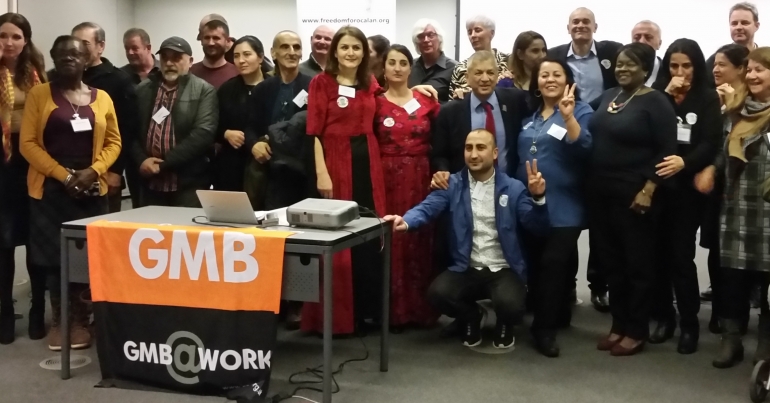 While all eyes were on the Brexit vote in Parliament on 15 January, City Hall held a little discussed solidarity event. The Canary attended the gathering. Activists, politicians, union representatives, and members of the wider Kurdish population all attended a ‘Freedom for Öcalan’ meeting.

The Turkish state has kept Kurdish political leader Abdullah Öcalan imprisoned incommunicado, on the Imrali Island prison, for 20 years. An open letter from a diverse range of intellectuals, activists, journalists, and others dated 12 January called for:

According to the speakers, the Turkish ambassador personally intervened to stop the event. But the Morning Star reported that pressure also came directly from the mayor’s office. London’s Labour mayor Sadiq Khan has, in the past, shown some sympathy for the Kurdish struggle for justice. Jeannette Arnold OBE, a long time London Assembly member, said she was both “shocked” and “surprised” at the apparent betrayal by those whose ‘solidarity’ has disappeared. Arnold didn’t specifically call out anyone by name.

The Canary asked the mayor’s office for comment on whether it had intervened to stop the event and why. A spokesperson said:

The mayor and his team have had absolutely no role in organising or hosting this private event. It has been organised independently by one of the members of the London Assembly.

Meanwhile, the police asked if two officers could be present at the event. British police have a record of undermining social, political, and environmental movements and trade union activity in the UK. But the organisers approved the police request because they wanted everyone to see the “transparent” and “democratic” objectives of the gathering.

The Turkish government has labelled the Kurdish Kurdistan Workers Party (PKK) resistance movement (which Öcalan co-founded) a terrorist organisation. So, the Turkish embassy reportedly contacted 14 unions in a bid to dissuade them from supporting the event. But Simon Dubbins, international director of Unite the Union, told the audience that this pressure likely had the opposite effect.

He said that the Turkish state had done everything to stop the event, including having “his ambassador” try and stop the meeting from occurring. Dubbins also called out the (non uniformed) police present. Dubbins said that the police (and everyone else) should understand that the “democrats are the ones in this room”. He also said that those present are having “open”, “transparent”, and “honest” discussion and debate; while Turkish-backed “jihadist thugs” are engaged in ethnic cleansing in Northern Syria.

Attacking the Kurds to retain power

Turkey’s government initiated peace discussions with the PKK and its now imprisoned leader Abdullah Öcalan from 2013 to 2015. But the progressive, pro-Kurdish HDP party won enough seats in parliament to take away the ruling AKP’s parliamentary majority in June 2015. President Recep Tayyip Erdogan withdrew from the peace talks with the PKK in July that year.

Then, in August 2015, he called another election to be held four months later. Meanwhile, the state unleashed “massive destruction and serious rights violations” in Kurdish majority regions, where the HDP’s natural base was. According to the UN, these military operations “affected more than 30 towns and neighbourhoods and displaced between 355,000 and half a million people”. The result being that snap elections were held amid a “toxic atmosphere” of “violence and fear” in November 2015.

The general secretaries of the relevant unions, and one law firm, wrote a letter on 14 January in response to the Turkish ambassador’s contact. The Canary was provided exclusive access to this letter. They expressed ‘bitter disappointment’ at Erdogan’s decision to “unilaterally terminate the peace negotiations” in 2015. They also emphasised the need for the Turkish state to restart a peace dialogue with the PKK.

The letter said the “UK trade union and labour movement” has “always stood shoulder to shoulder with those facing oppression”, including with Palestinians, South Africans, and Colombians. The general secretaries also said they were “deeply concerned” with the “treatment and repression” of Kurds in Turkey and Syria.

The signatories pulled no punches and were unambiguous in their support for the event. They also confirmed that representatives would be in attendance. Speakers included union representatives from the GMB, Unison, and Unite the Union.

Speaker after speaker discussed the intimidation that they experienced at the hands of Turkish authorities while observing the trials of the co-chairs of the HDP. Turkey’s “brutal crackdown” against dissent continues to be documented.

The importance of solidarity

The speakers all emphasised the importance of solidarity measures, including writing letters to political prisoners inside Turkey. Arnold read out a moving letter by artist Zehra Doğan. She was imprisoned following a painting she made of potential war crimes perpetrated by the Turkish state.

The solidarity expressed in the room with political prisoners in Turkey is difficult to understate. The pressure from Turkey, the mayor, and the presence of police did nothing to deter the organisers or speakers. On the contrary, the speakers denounced that pressure and affirmed their solidarity with the political prisoners and the Kurdish struggle for grass-roots, direct-democracy in Turkey, Syria and beyond. The meeting closed with the attendees standing for a group photo and chanting “Free Abdallah Öcalan”. 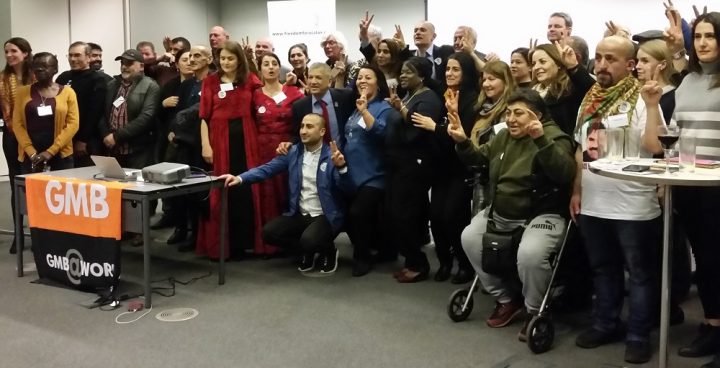