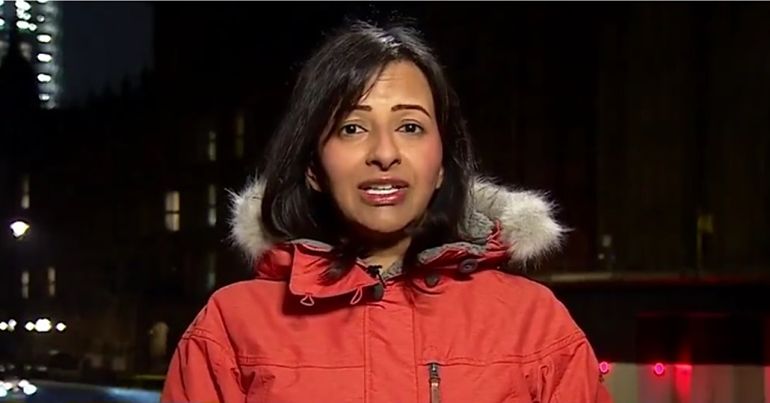 Good Morning Britain‘s political editor exposed Theresa May’s true priorities on 21 January. Ranvir Singh told the show’s viewers that the prime minister’s loyalty is “blue at its heart”. Effectively, she told the nation that May’s allegiance lies with her party, not the country. So, May’s Brexit ‘Plan B‘ will seek to save her crumbling party rather than do right by Britain.

That’s an unusual level of honesty to see on UK TV. And it’s an alarming fact for the country to hear.

May has to come up with a Plan B sharpish after MPs voted against her ‘Plan A’ by 432 to 202 on 15 January. So Singh spoke on GMB about what to expect next in Brexit Britain. She claimed people shouldn’t expect May to abandon one of her red lines and suggest staying in a customs union with the EU. Because GMB‘s political editor says that May knows:

if she had offered that then it would form a permanently damaging split in the Conservative Party, something that the party might never heal from… you’ve got to remember, she’s been a loyal Conservative for much longer than she’s been prime minister. I mean her loyalty truly is blue at its heart.

Singh added that May can only now give her unhappy MPs and the Democratic Unionist Party – who “hold all the power really”, because they prop up May’s minority government – what they want.

Clearly, Singh’s comments confirmed what some people were already thinking:

Sums up @theresa_may perfectly. ALWAYS been party before country. Tell me @tomhunt1988 will you be campaigning the same way? Beware Ipswich, another one in the ranks! @sandyofipswich

Others, meanwhile, argued that this sort of analysis isn’t commonly put out by other broadcasters:

To hell with everyone else

Of course, with deep divisions in parliament and the country, the UK needs a prime minister who’s focused on coming up with Brexit solutions that work for the majority right now. Singh’s comments suggest May is not the person to do that. And other reports about what Plan B might entail suggest the same. The Guardian, for example, claims May will not try and get a cross-party consensus on the new plan. Even worse, the Telegraph says that May is considering rewriting the Good Friday Agreement, which brought peace to Northern Ireland, in order to “unblock the Brexit logjam”. A No 10 source, however, denied this.

Frankly, it looks like May’s Plan B might work for her party, but to hell with everyone else.