Diane Abbott's response to the BBC's 'apology' is fierce - Canary 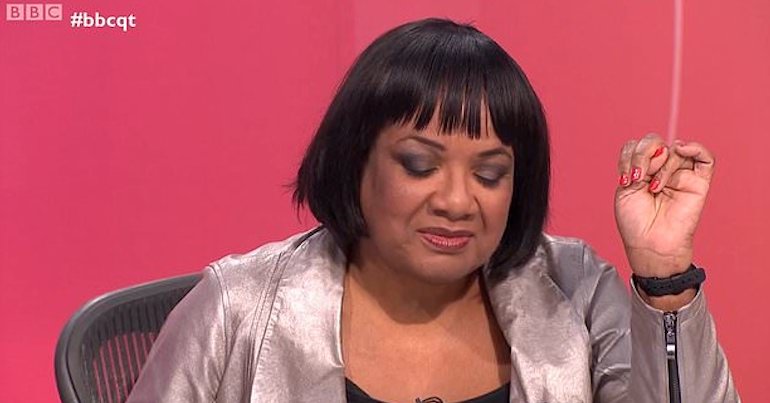 As The Canary reported on 20 January, many people were furious about the BBC’s ‘apology’ to Labour’s Diane Abbott. Now, she has also hit back. And her response is both accurate and fierce.

Abbott appeared on BBC Question Time on 17 January. As The Canary reported, audience members claimed Abbott met with a “hostile atmosphere” ahead of the show. This was not the only issue. Because the show’s new host Fiona Bruce joined right-wing columnist Isabel Oakeshott in wrongly attacking the shadow home secretary’s polling data.

Since then, tens of thousands of people have called for the state broadcaster to issue an apology.

Following public outrage, the BBC News press team posted two responses on 19 January. The first addressed the issue of comments made about the poll. But on 21 January, Abbott pointed out that this “is not an apology”:

Fiona Bruce was clearly repeating Tory propaganda that Labour were behind in the polls. If she had said behind in one poll, that would have been different matter.

This👇🏾is not an apology and does not address all of the issues that have been raised. https://t.co/XVJpncIegl

The second responded to Abbott’s treatment before the show. But again, Abbott’s response to this statement was damning:

They had not even looked into the matter before contacting my team, so this reassurance is worthless @bbcquestiontime https://t.co/tVPALaNddp

The Canary contacted the BBC for comment but received no response.

We also spoke, however, to an audience member whose account differs greatly from the BBC explanation. Jyoti Wilkinson said that, in the warm-up, Bruce:

took it upon herself to instigate a roast. Comments such as ‘let her know what you really think’ and ‘some may think she is in the shadow cabinet because of her very close relationships with Corbyn, nudge nudge, wink wink’ were made…

Another audience member said that, although they didn’t want to comment about their experience to journalists, they had complained to the BBC. They also intend to give “any evidence Diane thinks is necessary”.

Many people continued to complain to the BBC:

My letter of complaint to the BBC pic.twitter.com/HK5kZnefcG

And a Mirror editor called the BBC “stupid” for its failure to offer a full apology:

The BBC’s stupid not to apologise to Diane Abbott when its legitimacy is under the greatest strain since serving as a Tory Government's mouthpiece in the 1926 General Strike https://t.co/sTyeDG91GC

And as Owen Jones also pointed out, this issue is even more pertinent because, as a Black woman, Abbott is “the most abused politician in Britain”:

This isn’t good enough. Diane Abbott, the most abused politician in Britain, was heckled and ridiculed for stating a fact (the polling average shows Labour actually slightly ahead), and the presenter even said Labour was “definitely” behind. Why not just say sorry? https://t.co/7YffkLbUHd

This episode shocked and outraged thousands of people. Because it showed the full extent of BBC bias against the left. It was also yet another example of shocking and continued abuse against Abbott. But her response was fierce and direct. And thousands of people agree. This time, the BBC really did choose the wrong person to mess with.