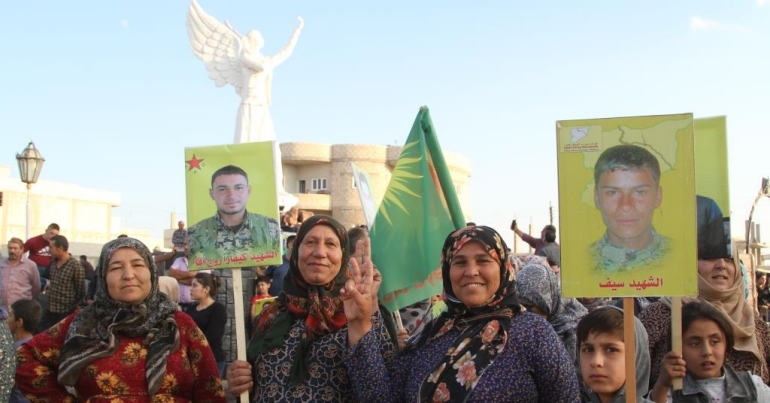 As of Wednesday 9 October, the fascist Turkish state along with their mercenary jihadist gangs began their offensive against the free peoples of North East Syria. There have already been civilian casualties, injuries and displacement as a result of these attacks.

As Internationalist volunteers in North East Syria, we came here to be a part of the revolution, to share what we can and to learn everything possible. We came with our own struggles carried like treasures in our pockets. Our backgrounds are in many ways different. Some of us rolled bruised or exhausted out of relentless direct action. Others stood up from behind a desk, or left a comfortable job.  Some of us aren’t even sure what path we were on.  But none of that is important.  What is important here is what we have in common – looking, searching, that certainty that something is wrong. Love, and rage.

We came to learn and we’ve learnt more than we could have imagined, and never in the ways we expected.  And while we’ve been learning, we’ve also been living.  We’ve sat with the people of North and East Syria, many passionate about the movement and others less active, just living their lives.  We’ve drunk more tea than you might think possible, played volleyball, been ill, been sad, been happy, and danced. We’ve danced in groups of three or four, stepping around sleeping babies in small living rooms, and in lines of hundreds of people, hands linked in front of the border wall the Turkish state built to divide Kurdistan.

While Erdoğan and the turkish state claim that these attacks are needed in order to establish a ‘safe zone’, we are well aware of their true intentions which is nothing more than to displace the Kurdish population through genocidal warfare and further expand their imperialist grasp on the Middle East. We condemn in the strongest way this attempt by the Turkish state to threaten everything that has been accomplished here.

For the last seven years, the people of North East Syria have undertaken a new a struggle in order to achieve a new society based on communalism, secularism and direct democracy with women’s liberation at its core. The Turkish State – which uses fascism and imperialism as a means to control society – sees this revolution as a threat to their power. Although the United States has been providing support to the Syrian Democratic Forces (SDF) since 2015, Donald Trump decided through one of his many unilateral Twitter policy U-turns to pull the military support from the Syria-Turkey border regions. As of now, several cities along the border of Northern Syria from Kobane to Derik have been struck by Turkish air strikes and artillery. There have been skirmishes between our comrades in the SDF and the Turkish armed forces and their jihadist allies. We have also seen an increase in sleeper cell attacks from Daesh (Isis/Isil), who are using this as an opportunity to assist the Turkish state in their objective to destroy the society here.

We will continue to work alongside our friends and comrades here in North Eastern Syria. We will resist any and all attempts by the fascist Turkish state and their jihadist allies from destroying everything that has been achieved here through resistance, sacrifice and bravery.

Of course the revolution is a work in progress. It’s not a utopia. It’s built on the daily sweat and effort of thousands of women and comrades, giving time and energy towards developing a better world, even when its hard, even when it’s dangerous, even when it’s boring or uncomfortable or incredibly complicated.  The revolution is constant work, and there’s enough of that work to do without one of the largest armies in the world trying to annihilate what has been built.

This work of building a better world, slowly but surely, starting from wherever we are, is the work we came to learn about and the work we want to do. But let’s be realistic – any project that offers a real alternative is threatening to the status quo, and will always risk attack. Self-defence has to be a part of what we do. There’s a hundred ways to defend Rojava, both here and from outside.

We will be here, doing whatever we can and whatever we must, and almost definitely still drinking tea and dancing. And because we’re fighting for the same things, there’s no difference being here or being halfway across the world. We hope to see you all in the struggle, side by side, even when we’re far apart.

In memory of the resistance of Anna Campbell and all those who have fallen in the fight for freedom.