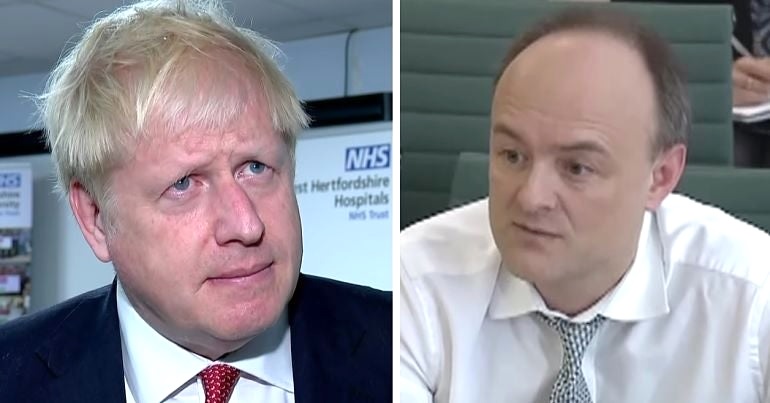 It’s fair to say Boris Johnson hasn’t had a smooth ride since becoming prime minister. And, despite some murmurings about possible progress in the Brexit talks, things don’t look set to get any easier.

Now, an investigation by the Bureau of Investigative Journalism and the Guardian has led to accusations of a potential conflict of interest involving Johnson’s de facto chief of staff, Dominic Cummings. Shadow health secretary Jonathan Ashworth says the ‘murky links’ between Cummings and an NHS fund “raises serious questions”.

As the Bureau reports, Cummings faces conflict of interest accusations:

over a publicly undisclosed consultancy job at a healthcare start-up endorsed by the government and in pole position to receive cash from a £250m NHS fund.

The firm Cummings had the paid role with is Babylon Health. According to the investigation, he advised the firm on “its communications strategy and its senior recruitment”. The Bureau says:

Cummings’ paid role with Babylon concluded in July last year but he continued to advise the company until September 2018. That month [health secretary Matt] Hancock visited the company and told staff he wanted the NHS to help Babylon expand.

Following Johnson’s election by party members as PM, his office and the Department of Health pledged a £250m fund for the use of Artificial Intelligence (AI) in the NHS. At the time, Johnson said:

My task is to ensure the NHS has the funding it needs to make a real difference to the lives of staff and patients. Transforming care through artificial intelligence is a perfect illustration of that.

Cummings was Johnson’s top aide at the time – and still is. And, as the Guardian reports:

Babylon – which welcomed the announcement – is well placed to benefit [from the fund] as a key player in the AI field.

The firm is already in a contract with Hammersmith and Fulham Clinical Commissioning Group. The contract is for Babylon’s ‘GP at Hand’ app, which enables GP appointments to happen via video and phone link.

Special advisers like Cummings do not have to disclose such previous work. But MPs have questioned whether the adviser’s work with Babylon constitutes a conflict of interest. Ashworth said:

The links between Dominic Cummings in the heart of Downing Street, the health secretary and this AI health firm are increasingly murky and highly irresponsible

Mr Cummings’ work for this company raises serious questions about a potential conflict of interest given the firm could be in line to receive public money from this new £250m AI fund.

We need to know if he declared his work for the firm to the cabinet secretary when he joined the government payroll.

Downing Street wouldn’t answer detailed questions about Cummings’ previous consultancy work, including for Babylon. But a spokesperson told the Bureau:

Special advisers act in accordance with Special Advisers’ Code and the relevant provisions of the Civil Service Code, acting with integrity, and serving the public interest. Special advisers have no role in authorising expenditure of public funds.

Cummings is regarded by many as a controversial choice for the position of top adviser to the PM. These accusations of a possible conflict of interest will do nothing to relieve those concerns.