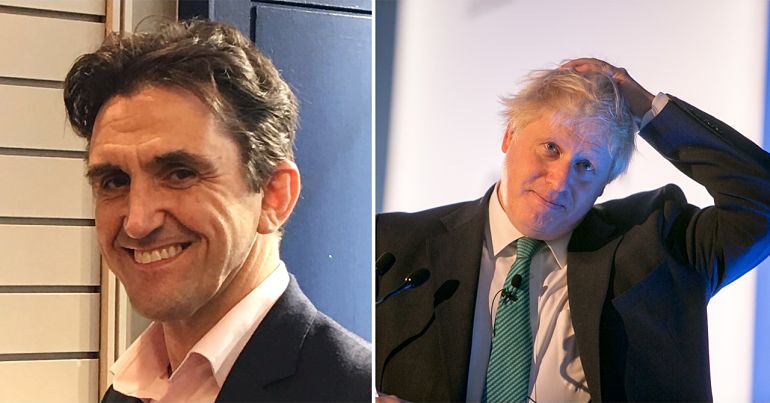 Stephen McGann has raised a crucial point about Boris Johnson’s administration. The actor and author, who plays Doctor Turner in Call The Midwife, tweeted:

Given that the Tufton St gang have now finally got their hands on the levers of power, do you really think that Brexit is going to be the end of all this? Day after we leave, just go back to democracy and reconciliation with a nice polite handshake? Honestly? /1

While “the Tufton St gang” sounds more like something from Peaky Blinders, McGann is referring to people who now occupy key roles within the Johnson regime. Chief among these is senior adviser Dominic Cummings. He ran Vote Leave during the EU referendum campaign and was previously Michael Gove’s “main adviser”. Cummings has been described as running a “reign of terror” within No 10 Downing St.

The Westminster building located at 55 Tufton Street is home to a small but influential network of right-wing think tanks.

Among these at various times have been the climate-sceptic Global Warming Policy Foundation, the Taxpayers’ Alliance and Vote Leave. DeSmog describes a consistent pattern of climate denial, Euroscepticism and fondness for deregulation running through the network. The Centre for Policy Studies is next door at 57 Tufton St while the Institute of Economic Affairs is just round the corner at 2 Lord North St.

DeSmog’s Mat Hope, speaking in a video on Tufton St created by Real Media, shows [2:40] how Matthew Elliott, a central figure in the network, was already able to influence government policy, especially over Brexit. The founder of the Taxpayers’ Alliance and former CEO of Vote Leave, Elliott also worked with the Legatum Institute. Legatum has played a key role in shaping thinking on Brexit, particularly for former Vote Leave figures such as Johnson and Gove. Chloe Westley is another Tufton St regular who’s moved from positions at Vote Leave and the Taxpayers’ Alliance to a role in government as Johnson’s head of social media.

Westley celebrated Johnson’s victory in the Conservative leadership contest by looking forward to a “pro-freedom budget”. This would include “tax cuts for all”, the end of the TV licence and a “bonfire of unnecessary quangos”. In other words, small government.

But this direction deeply worries McGann. He suggests that the suspension of parliament is a prelude to the dismantling of much that “we take for granted”:

These people haven’t even started! Every crushed precedent is just a prelude to their brave new world to come. Every hard-fought right and social advance we take for granted is about to be removed with exactly the same hard-faced contempt for truth and principle.

The track record of Cummings and others from the Tufton St network does suggest that they’re not squeamish about doing what it takes to get their way. We need to stay on the ball and do what we can to #StopTheCoup.