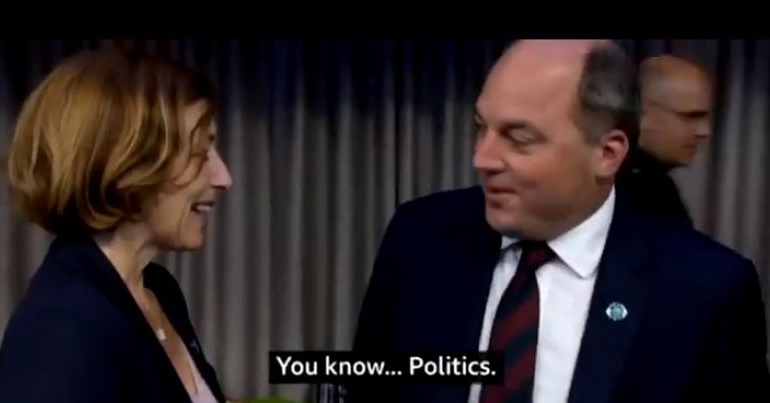 Defence minister Ben Wallace has been caught on camera saying the ‘unspeakable’ about Boris Johnson.

Since the PM’s decision to prorogue parliament, he’s insisted that he’s only doing it so he can move forward on his “very exciting agenda” for the country. But many people suspect that’s not the case at all. Instead, they believe he’s trying scupper MPs’ involvement in the final stages of Brexit.

That’s not something he and his ministers have been willing to admit out loud, though. Until, that is, Wallace was caught on camera effectively saying the same thing. Oops.

Defence Secretary Ben Wallace caught on camera explaining the real reason why Parliament has been prorogued.

Nothing to do with a new agenda – it is all about numbers as the government knows they can’t command a majority in the House of Commons, thus they have misled The Queen. pic.twitter.com/kJ5CtLPuep

So, you know, eventually any leader has to… try

He concedes that he doesn’t know what the outcome of “it” will be and breaks down laughing. He continues, after regaining his composure, saying “[inaudible] politics”. Later in the exchange, he then appears to explain why “it” had to happen:

we’ve suddenly found ourselves with no majority and a coalition and that’s not easy for our [political] system.

Taking us for fools

The government has since argued that Wallace “misspoke” in the conversation. Clearly he did. Because the minister did the unspeakable: he gave credence to people’s suspicions. He suggested that Johnson has done “it” – the proroguing of parliament – due to the precarious position of his minority government in regards to Brexit. Furthermore, Wallace’s behaviour suggests the cabinet thinks the whole thing is funny:

The part of this which is extraordinary and totally compelling is when the defence secretary Wallace says he doesn’t know what the “end of this” – the suspension of parliament – will be, and collapses in hysterical laughter https://t.co/9jFUJnj1eS

Well, the people aren’t laughing. And they’re not fools either. The jig is well and truly up.