Radio 4 might have you reaching for the sick bucket. But John Mcdonnell nails why it's done us a favour. - Canary 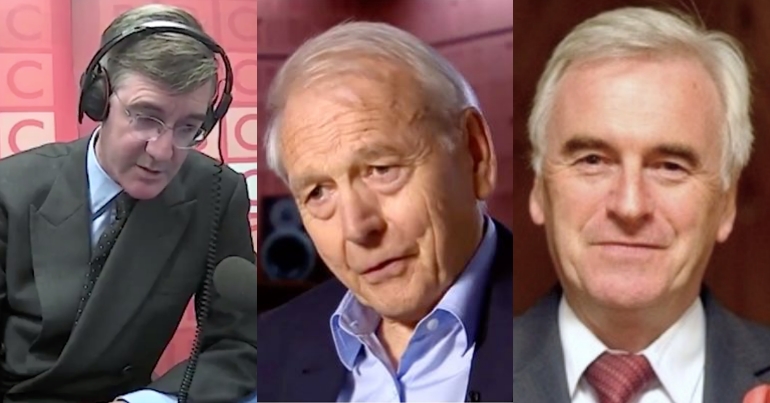 Radio 4‘s Today programme on 29 August might have had people reaching for the sick bucket. John Humphrys held a sycophantic interview with Jacob Rees-Mogg where the MP dismissed the outrage people are feeling at the suspension of parliament as a “candyfloss of outrage”.

Luckily, shadow chancellor John McDonnell was on hand to point out why the interview might have done us all a favour:

Let me thank Boris Johnson or Cummings or whoever decided to put up Jacob Rees Mogg for the BBC’s Today programme. He displayed their arrogant, “born to rule”, contempt for our Parliament democracy, for many of his colleagues and for our people that marks out the Johnson regime.

The Queen has granted permission for Boris Johnson to ‘prorogue’ parliament. Johnson claims that the suspension is purely in order to start a new session of parliament. But critics, including Labour leader Jeremy Corbyn, believe it’s an attempt to force through a no-deal Brexit. McDonnell has also described it as a “coup”. Protests have already taken place. More are planned and calls for a general strike trended on Twitter on 28 August. Meanwhile, over a million people have signed a petition demanding parliament isn’t suspended.

As leader of the House of Commons, Rees-Mogg appeared on the programme to justify the government’s position. Given the context, a casual listener could be forgiven for thinking this should have been a robust interview. But the programme started with a sickening lovefest between Rees-Mogg and Humphrys.

Rees-Mogg thanked Humphrys for his “distinguished service on the Today programme”. He continued:

since we’re in a friendly mood, tell us about your chat with the Queen yesterday morning

Guess what? It didn’t get any better

The interview largely carried on in a similar manner. After spending time praising the Queen, Humphrys quizzed Rees-Mogg on whether parties should still have their conferences in the UK’s current predicament. In response, Rees-Mogg claimed that:

there’s no pressing legislative issue relating to Brexit that would interrupt the party conference season.

Rees-Mogg described the reaction to the suspension of parliament as a “candyfloss of outrage”:

Leader of the Commons @Jacob_Rees_Mogg claims the "candyfloss of outrage" against suspending Parliament is from people who never wanted to leave the EU #r4today pic.twitter.com/TKVy2oJZuk

The Queen’s speech new session of parliament is a completely routine part of our constitution. It’s not archaic. It’s not arcane. It normally happens every year.

Human rights barrister Marc Willers summed up his feelings about the programme:

I now only listen to @BBCr4today to see how much it has morphed into a propaganda machine for the Tory government and the no deal brexiteers. https://t.co/m3RkP4KQay

It wasn’t just McDonnell who commented on the interview. Labour MP David Lammy also spoke out about it:

These zealots who once talked so much about Parliamentary sovereignty will be remembered in history for trashing it. #r4today https://t.co/j76SPEOdDs

Meanwhile, Green peer Jenny Jones put Rees-Mogg right on his suggestion in the programme that almost everyone who is ‘outraged’ about the suspension of parliament was a Remain voter:

Hi @Jacob_Rees_Mogg I not only voted Leave, I campaigned for it, as @DanielJHannan will confirm. But I do not want no deal. And as Molly says, I am outraged by your disregard for our democracy. https://t.co/aDJmOT8kPb

Jacob Rees-Mogg continues to peddle the line @BBCr4today that all MPs worried by NoDeal only want to remain in EU. It’s untrue,he knows it. I’ve voted to leave consistently since accepting Referendum result. He has not. That’s why we’re where we are. Pandora’s Box now open wide. https://t.co/Oq0H1BGVDV

As McDonnell pointed out, Rees-Mogg dripped ‘arrogant contempt’ throughout the interview. And Humphrys essentially propped him up. Although he did offer a few challenges to Rees-Mogg, there was none of the sneering and constant interruptions that Humphrys regularly utilises with other interviewees.

We have an unelected prime minister trying to subvert democracy. The very least our public broadcaster should be doing is properly holding him and his cohort to account.