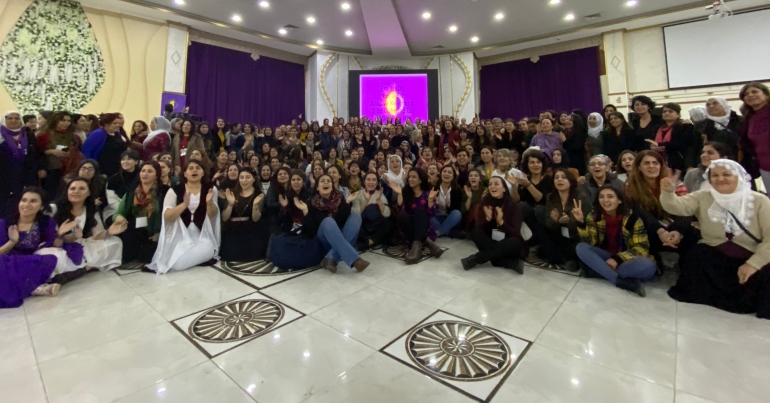 Turkish police line the entrance to a two-day women’s conference in Amed (Diyarbakır). Everyone entering is searched. On the second day, they say I can’t take my tablet in. They claim it’s because they don’t want people tweeting. But we know it’s just the police being difficult, as everyone has smartphones. “They’re just playing games,” one friend says to me.

The conference, held at a venue usually used for weddings, is surrounded by police fencing. Armoured police cars are parked outside. Intimidation and repression fill the air. One woman was detained travelling to the conference from another province. Most people don’t think of Turkey as a country under occupation. But for the people of Bakur (‘Northern Kurdistan‘ – the Kurdish-majority area of Turkey), this is exactly what it is.

“It’s usual for us,” one friend says. Another later tells me: “we don’t make plans for the summer. We never know if we’ll be around that long.” This isn’t an exaggeration. So many of the women here have been to prison or are under investigation for their political work.

The Canary was invited to the conference organised by the TJA (Free Women’s Movement). It brought together over 500 women to:

Organise themselves… against patriarchy, capitalism, nationalism and [the forces that] put pressure on women’s way of life.

And it took place under the banner of:

We ARE women; we ARE here; we LIVE for our freedom; we have RISEN for change.

In Turkey, a NATO member, this counts as ‘supporting terrorism’. But given the UK government’s criminalisation of the Kurdish freedom movement, we’re arguably not far behind.

There’s a women’s revolution taking place in the Middle East. Not just in Rojava (the mostly Kurdish part of northern Syria), where images and stories of the brilliant and brave female fighters against Daesh (Isis/Isil) have captured international headlines, but in Bakur too. Under the increasingly dictatorial and fascistic government of Recep Tayyip Erdoğan, women’s rights are being eroded at a national level. In January, for example, a so-called “marry-your-rapist” bill was introduced, meaning men who rape women can avoid punishment by marrying their victims. Meanwhile, women are regularly attacked with the police showing little interest in investigating.

But women are fighting back. And the Kurdish women’s movement is at the forefront of this fightback. Lipservice isn’t just paid to women’s equality in the Kurdish freedom movement; equality isn’t something that can be sorted after other struggles are won – it’s a central foundation that is visible in every aspect of organising. And it shows. Not just with the women at the conference but in the movement’s political structures. The HDP (Peoples’ Democratic Party) has ‘co-chairs’ to ensure there’s equal representation for women across the party.

Appearances can be deceptive

The conference opened with music and dancing with many women in traditional dress:

To some Western eyes, the sight of women in traditional dress and headscarves may not seem revolutionary. But that would be a massive mistake. Many women, especially young women, choose to dress traditionally for events such as this. And it’s easy to see why, in a culture that represses and criminalises Kurdish identity. It’s an expression of power and resistance.

Western women should know better than to judge women from the way they look. But often, that’s not the case. Some Western women will judge a woman as repressed for wearing a hijab or traditional dress and another woman as free because she wants to wear a bikini. And nothing could be further from the truth.

Whether it’s the women who dress in jeans the rest of the time or women who always prefer traditional dress, this doesn’t change their political message. If we believe in women’s freedom and equality, judging women by the way they choose to dress has to stop. Now.

As I stated about Western women in a speech I made at the conference:

Many women see themselves as free but are trapped by capitalism and the state. We seek to show that a women’s revolution is also needed and necessary in Western countries in order to be free. We are inspired by the Kurdish movement that puts women at the centre of the movement rather than an afterthought once other struggles are won.

And as Canary journalist Afroze Fatima Zaidi wrote in 2018 about white men commenting on how Muslim women choose to dress (in a statement that could also be applied to some white women):

In reality, the only reason white men are so keen to debate the burqa or niqab is so that they can impose their views on Muslim women. Men wanting to exercise their authority and control over women by policing how they dress is nothing new. White men in power publicly describing Muslim women as “bank robbers” and “letter boxes” is both misogynistic and racist. It is boldfaced hate.

Throughout the two days, women made speeches and suggestions. They talked about their struggles and resistance. They offered self-criticism on the struggle and made suggestions for moving things forward. On the final afternoon, motions were made based on existing campaigns and from comments made at the conference. A final declaration was then read with women adding comments they felt were missing.

We cannot and should not underestimate the power of women coming together and setting our own agendas. The Canary journalists who attended were inspired and energised by the event. We and the women we met and spoke to were also inspired, and took strength from the international solidarity we can show each other.

I finished my conference speech with the following words; words which seem the most appropriate way to finish this article:

Note: This is the first in a series of articles about the conference and the women’s organisations The Canary met in Amed. Other articles will look in more depth at the issues discussed and feature interviews with women we met while there.