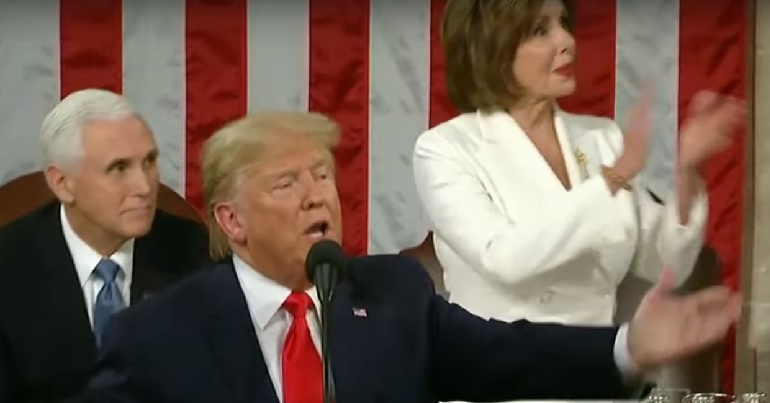 Donald Trump just gave the annual ‘State of the Union’ address to the US Congress. Critics have widely panned it for resembling more of a campaign rally than its traditional purpose of presenting the president’s legislative priorities and budget proposals to lawmakers and the wider public. But while this is true, the establishment Democrat figures leading the attack have no moral standing when it comes to some of Trump’s worst policy stances – such as his ongoing commitment to regime-change efforts abroad.

Trump delivered the address to a joint session of both chambers of the US Congress. This came less than two months after its lower chamber – the House of Representatives – voted to impeach him for ‘abuse of power’ and ‘obstruction of congress’. And in a sign of his bitterness toward the Democrats who pushed impeachment, Trump refused to shake the hand of House speaker Nancy Pelosi as he entered the chamber. In response, Pelosi tore up her copy of the speech toward the end of the proceedings.

Democrats handed Trump a blank check to make war, a massive military budget and a new bad trade deal. Ripping up a speech is not resistance.

The speech also came just days before the Senate is expected to vote on whether to remove Trump from office. Given that the vote in the House was almost entirely on partisan lines and that Trump’s own Republican Party holds a majority in the Senate, he is widely expected to be acquitted.

Trump’s speech was littered with the lies and bluster that has come to be expected from the former reality TV star and shady businessman. He claimed, for instance, that his administration is working to protect patients from being denied treatment due to pre-existing conditions when in reality his administration has been working through the courts to do the exact opposite. His boasts about the buoyant state of the economy, meanwhile, were grossly embellished. While the US economy has seen some growth in recent years, Trump did not ‘rescue’ it from a deep slump during the Barack Obama presidency.

"Here is Trump's "booming economy." A 37% increase in the wealth of billionaires, a 1% increase in real wages for American workers." @BernieSanders #SOTU Response pic.twitter.com/CvHKN0VqjO

The feature that perhaps most turned heads was Trump’s bestowal of the Presidential Medal of Freedom – the country’s highest civilian honor – on the notorious far-right radio shock-jock Rush Limbaugh, who was a central figure in the ‘birther’ movement and has frequently made sexist, racist, and homophobic comments during his decades-long radio show.

Despite establishment Democrats’ posturing against Trump, they appeared to be in lockstep on some his administration’s major policies. When Trump hailed Venezuelan coup leader Juan Guaidó – who attended the event in person – as the “true and legitimate president of Venezuela”, most congress members of both major parties took part in a standing ovation, including Nancy Pelosi. Other establishment Democrats also applauded when Trump boasted about the illegal assassination of top Iranian general Qasem Soleimani.

No one should be surprised, though. Because for decades, there has been an overwhelming bipartisan consensus in favour of Washington’s imperialist agenda of regime change and trampling over international law. Only a handful of progressive Democrats in Congress, such as Bernie Sanders and Alexandria Ocasio-Cortez, have spoken out against US meddling in Venezuela or its hypocritical hostility towards Iran. Establishment Democrats, meanwhile, have been cheerleading alongside Trump on Venezuela and criticizing Middle East policy only on thin procedural grounds.

It was super impressive how Nancy Pelosi lept out her chair the minute Trump mentioned The True and Legitimate President of Venezuela Juan Guaido, leaving Mike Pence in her dust, sitting there like he was some sort of covert Communist sympathizer.

Make a gif of that. pic.twitter.com/MnBBY4uqrD

And this is nothing new. The Democratic establishment has been just as implicated in imperialist warmongering as the Republicans. Obama, for instance, ordered ten times more drone strikes than his predecessor George W. Bush. His secretary of state Hillary Clinton, meanwhile, essentially helped a right-wing coup in Honduras to succeed.

During the Vietnam War, some of the worst atrocities took place during the Democratic presidencies of John F. Kennedy and Lyndon B. Johnson. In fact, it eventually fell to a Republican, Richard Nixon, to end the war in 1975. Likewise, Democrat Bill Clinton oversaw military intervention in the Balkans and the bombing of a pharmaceuticals factory in Sudan.

Trump’s presidency certainly has degenerated into a wretched horror show. But it would be wrong to think establishment Democrats represent a genuine alternative. Only the newly invigorated progressive wing of the party can provide a real resistance to the decades-long bipartisan consensus in favor of corporatism, imperialism, and war.