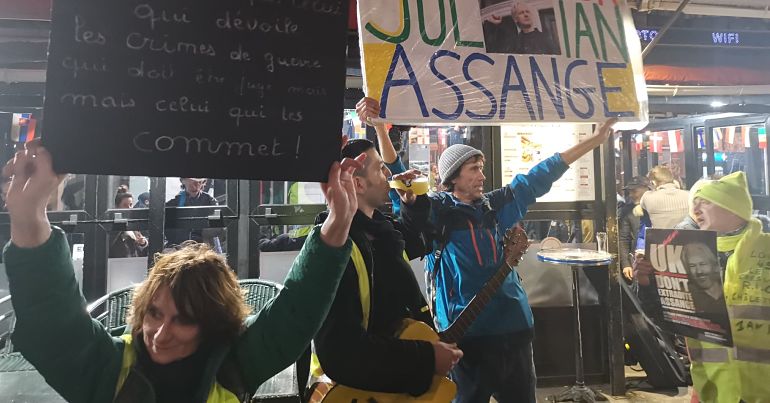 On 23 February, 143 French activists travelled from Paris to Woolwich Crown Court to support Julian Assange, WikiLeaks, and press freedom. The Canary joined them.

It was a cold and miserable night in Paris, and the coaches were running late. But the group of French activists – many of whom are also Gilets Jaunes (Yellow Vests) – were not deterred.

As the rain picked up, they stayed outside with their guitars and megaphones, giving interviews to the international journalists present.

One activist railed about the upcoming hearing: “They’re going to try and get him on a plane to the US as soon as possible – they’re thinking about the trade deal”.

Another activist, dressed as Jesus with a full-size crucifix, led the chants.

Paris right now, activists preparing to travel to London for Julian Assange hearing. Lots of international press here but none from UK

Corinne, one of the three activists who organised the event, spoke about the importance of action:

We decided to found this group [Assange, L’Ultime Combat], in the middle of September, and we now have more than 4,000 people on Facebook. It’s a group for information and action – especially action, because it’s ok to be informed, but we need to act now. I think it’s an emergency. The risk is high.

Maxime Nicolle, a French activist and one of the principal figures in the Gilets Jaunes movement, told The Canary:

The only crime he’s committed is to have informed the public. As citizens, if we don’t defend people like that, we’ll all find ourselves in prison. So it’s absolutely essential that Assange is freed…

If it becomes illegal to inform the public, we’ve found ourselves in a dictatorship. If we fight today, it’s not only for the man who lost his liberty ten years ago. It’s also for individual liberties, and our fundamental rights.

The weather was little better in London than in Paris, and nobody on the coach got much sleep. “This is a bloody miserable place”, remarked an activist as the iron fence around the court came into view. It was the second time he’d come to support Assange here – a place he described as “cold” and “really sinister”.

The police stopped letting anyone without a press pass into the main area outside the court early, so many of the French activists remained at the gate.

As the hearing proceeded, the French activists – now joined by activists from all over the world – could be heard inside the courtroom.

When the hearing paused for a lunch recess, a French activist and friend of Assange said:

A lot of shameful slandering has been done on Julian’s name. But when we respond to that, we are somehow wasting special time and special brain space. It’s not about him any more, and it has not been about him so much as him being the lightning rod of WikiLeaks and the ideas WikiLeaks stands for.

So I think it is more than time to put these ideas back at the centre of the stage. Ten years ago, WikiLeaks released collateral murder. For 16 minutes, we had the unique occasion to stand in the cockpit of an Apache helicopter, and feel within the skin of these kids how it feels to play this video game where you massacre people, and journalists of Reuters, while being left completely unaccountable.

This is a kangaroo court. This is a parody.

National law, of many jurisdictions, and international law, have been routinely violated at each and every step of everything that happened to Assange.

Assange’s hearing will continue through the week and re-convenes in May later this year.