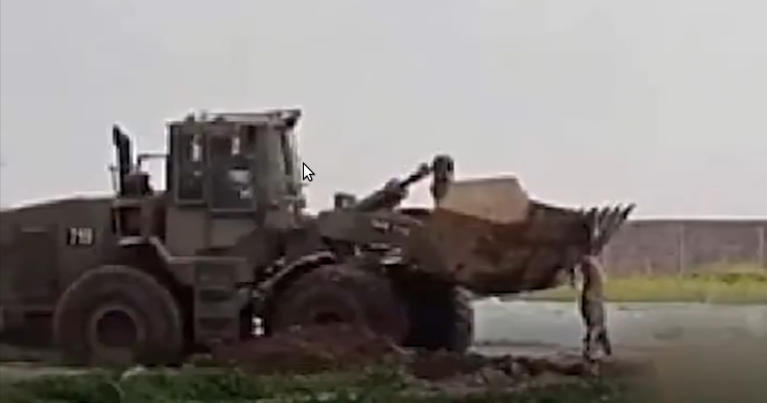 CORRECTION: This article was updated at 3.30pm on 17 March to include the Israel Defense Forces’ allegation that Mohammed al-Naem was planting an explosive near the Israeli fence when he was shot, and to air his family’s strong refutation of this allegation.

Trigger warning: this piece contains video footage that some viewers may find distressing.

Disclosure: The author of this piece is also a researcher for Corporate Occupation, whose work this article cites.

On Monday 24 February the world woke up to a new set of gruesome images showing the terrible reality of Israel’s siege of the Gaza Strip.

A young man called Mohammed al-Naem was killed by the Israeli military, close to the Israeli fence which separates the Palestinians of Gaza from the lands which have been colonised by Israel since 1948.

Al-Naem was shot dead by Israeli forces on Sunday 23 February, close to the Palestinian city of Khan Younis.

residents of the area came to the incident’s location, and there were loudspeakers calling on people to hasten and attempt to retrieve the bodies before the army comes and steals them as has been the case several times before.

Al Najjar described how Israeli vehicles, including a military bulldozer, approached the scene:

The bulldozer wasn’t there yet, so four young people managed to reach the body and put the martyr on the wheelbarrow, but he fell off on their way back because of the Israeli fire and their fear of getting shot. They tried to carry him again, but the Israeli soldiers shot one of them, and he was injured so their balance was disturbed, and the martyr fell off again.

During the third rescue attempt, the bulldozer entered Gaza with the tank. And for the first time in years, we saw an Israeli bulldozer entering around 70 metres into Gaza.

The Gaza health ministry confirmed that two of the rescuers were injured, one shot in the leg.

Shocking footage from the scene shows the rescuers coming under attack as they tried to retrieve Al-Naem’s body. It also shows the bulldozer scooping up his body and dragging it away:

🇵🇸#Palestine : New Israeli Crime
Israeli occupation forces use a bulldozer to pull the body of Palestinian young man after killing him near the barbed fence in the south of Gaza. . pic.twitter.com/bPBCXqFbOq

Complicity of a multinational corporation

Research group Corporate Occupation was able to confirm that the bulldozer used was manufactured by Caterpillar, a US-based multinational corporation. It tweeted:

Shame on @CaterpillarInc for manufacturing the bulldozer used in the gruesome Israeli war crime shown in this video @HSBC_UK divest from Caterpillar now!#Stopthedemolitions https://t.co/K1OUE08GLa

The Canary asked Caterpillar to comment on the footage but we had not received a reply at the time of publication.

Adalah, the Legal Centre for Arab Minority Rights in Israel, has written to the Israeli military over the incident. Its letter states:

[The scenes] depicted in the video [are] viewed as war crimes and blatant violations of international criminal law, and international human rights and humanitarian law.

In breach of international law

Caterpillar, a US multinational, provides D9 military bulldozers to the Israeli army through the US Foreign Military Sales programme. Caterpillar equipment is regularly used in Israeli invasions of Gaza.

It appears this is not the first time that Caterpillar equipment has been used to transport a dead body. A tweet posted on 17 February reported that a Caterpillar military bulldozer was used to scoop up the body of another Palestinian man near Ramallah in the West Bank.

If Twitter's translation is correct, this footage shows a Caterpillar Israeli military bulldozer being used to get rid of a Palestinian's dead body. This is unbelievable. https://t.co/QLIvYHzgd2

‘I thought I couldn’t any longer be shocked’

Shahd Abusalama is a Palestinian student from Gaza who is currently studying at Sheffield Hallam University. She told The Canary:

The documented crime was too horrific to watch, even for the Palestinian people who are very familiar with Israel’s brutality. When the video came to my attention it struck me so terribly. I thought I couldn’t any longer be shocked with Israel’s criminality, but there is always more criminal actions that leave you in even more shock.

This is an expression of Israel’s immunity when it comes to their repeated crimes against the Palestinians. This crime is one of many that went unseen, and is reflective of the unprecedented dehumanisation Palestinians are subject to.

The mainstream British media coverage of this crime, including The Guardian was solely based on statements from the Israeli military justifying this dehumanisation.

The Israel Defense Forces (IDF) alleged that al-Naem, a fighter with Islamic Jihad, was planting an explosive device by the Israeli fence when he was killed. His family strongly refutes the claim, which echoes propaganda that has been used to dehumanise Palestinian victims in the past.

Abusalama described speaking to her family in Gaza about the video:

I remember when I talked to my family following the incident, while Gaza was under bombardment again, they were all lacking any words to describe the [indignity with which the Israeli military treats] Palestinian bodies.

My father was especially angry, he asked ‘What if that person who was dragged and stepped on multiple times with a Caterpillar bulldozer had been an Israeli citizen, what if it hadn’t been a Palestinian body that had been treated in that horrific, brutal way. If it was an Israeli citizen then words of condemnation would be filling the public domain and politicians would be competing to condemn it in their strongest words. But these word of condemnations shouldn’t be left suppressed just because the crime has fallen on another Palestinian.’

Caterpillar assisting crimes against the Palestinians

Abusalama concluded by calling for urgent action against Caterpillar:

Caterpillar has got away with its assistance of Israeli crimes against the Palestinians for many decades. And it’s long overdue for actions to be imposed against Caterpillar’s violations of human rights, and systematic abuse of the UN Guiding Principles on Human Rights and Business.

Tom is also a researcher for Corporate Occupation. Twitter: @CorpOccupation