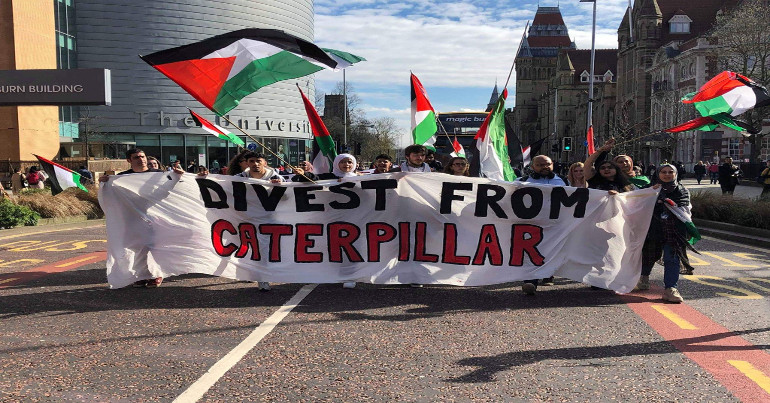 Students across the UK have called on universities to end their complicity in Israeli apartheid. ‘Apartheid off Campus’ actions were held at over 30 universities this week.

The protests are part of the annual Israeli Apartheid Week, an international series of events that “seeks to raise awareness about Israel’s apartheid regime over the Palestinian people and build support for the growing Boycott, Divestment and Sanctions (BDS) movement.”

Israel is currently militarily occupying the West Bank and East Jerusalem, maintaining a siege of the Gaza Strip and denying equal rights to its Palestinian citizens.

Israeli Apartheid Week is now in its 15th year. The theme of the event this year is #StopArmingColonialism.

Students call for divestment from Caterpillar

In the UK, students at Manchester University called for an end to university investments in Caterpillar:

The BDS (Boycott, Divestment and Sanctions of Israel) society marched through the University of Manchester campus to demand that the University divests its shares, worth £482,381.26, from Caterpillar, and in solidarity to the Palestinians protesting every day during the Great March of Return, of which over 200 have been killed by the Israeli military.

The protest is part of a three-year campaign against the university’s investments in Caterpillar. In February, students occupied a meeting of the Board of Governors, demanding that the university divest.

Caterpillar, a US multinational, provides D9 military bulldozers to the Israeli army through the US’ Foreign Military Sales programme. According to a recent book by research group Corporate Occupation, Caterpillar bulldozers were used in demolitions of at least 41 Palestinian properties by Israeli authorities during 2018. Seven of these demolitions were acts of collective punishment against the families of Palestinians accused of involvement in resistance attacks on Israeli soldiers or colonists. The Israeli policy of punitive home demolitions is widely accepted to be in breach of international law.

Caterpillar D9 bulldozers were used in January 2018 to demolish houses near Jenin in the West Bank. The demolition was carried out as a revenge attack against the family of Ahmad Jarrar. Jarrar was suspected of fatally shooting an Israeli colonist. According to Israeli human rights group B’Tselem, the soldiers, accompanied by Caterpillar D9 bulldozers, began the demolition while people were still inside one of the houses. One Palestinian man was killed during the incident.

“Our kids were so frightened they were in tears”

In a testimony given on 24 January 2018, Nassim Jarrar said:

Shortly after 3am we heard cars and a bulldozer approaching our house. The bulldozer started demolishing the western side of the house. My husband, children and I started screaming because we were scared the house would collapse on top of us. We felt the ground shake and heard parts of the house come crashing down. We went into the kitchen and stood there, confused and scared. Our kids were so frightened they were in tears. The sounds of the demolition grew louder.

Caterpillar D9 Bulldozers are also regularly used in invasions of the Gaza strip, razing Palestinian farmland in the area close to the apartheid barrier between Gaza and Israel, levelling the land to give Israeli snipers a clear shot at Palestinian Great March of Return protesters. 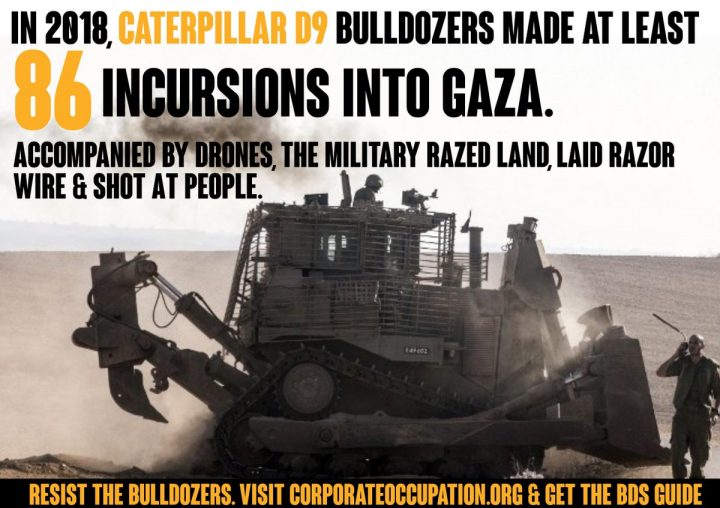 Bulldozer used in yet another murder

On 19 March, the Israeli military shot dead two young Palestinian men. Raed Hamdan, 21, and Zayed Nuri, 20, were driving in their car when soldiers opened fire on them. A military bulldozer was then used to drag and crush the car. The bulldozer appears to be manufactured by Caterpillar. Palestinian people tweeted that the men were still inside the car when it was bulldozed:

About last night in #Nablus and the killing of the two friends, Raed and Zayed.
"Then an Israeli bulldozer drove over the car several times, and the screaming of the guys inside the car was heard, until they were no longer screaming". pic.twitter.com/TWM8KKB0hG

The Canary contacted Caterpillar for comment but had not received a reply at the time of publication.

Caterpillar isn’t the only company being targeted. Activists have also taken direct against bulldozer company JCB twice within a year, blockading its factories and preventing goods from arriving and leaving. 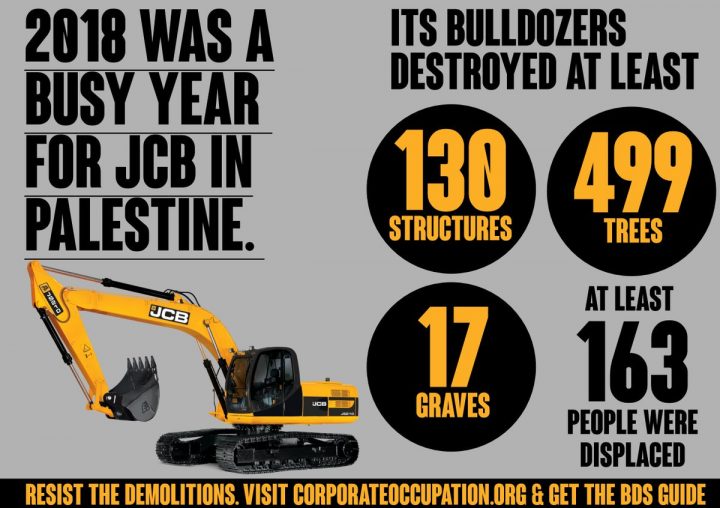 On 21 March, four #StopTheDemolitions activists appeared in court in Newcastle-under-Lyme to plead not guilty. They were charged with blockading the JCB Global Logistics Headquarters earlier this month. UK company JCB also manufactures bulldozers which the Israeli authorities use to demolish Palestinian homes. The defendants plan to argue that their actions were justified because of JCB’s complicity in Israel’s home demolitions.

As activists face prosecution, Israel continues to act with impunity, while the bulldozer companies continue to rake in the profits.