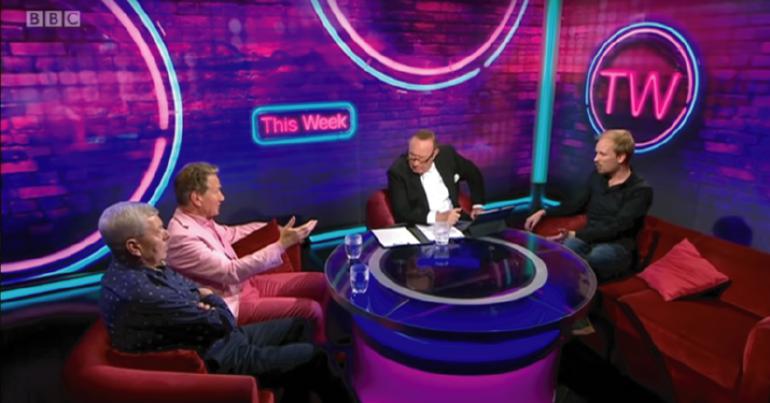 The historian and author Rutger Bregman has been making quite a stir in 2019. He lectured the super rich at Davos about paying taxes; he accused a Fox News host of promoting billionaire propaganda; and now he’s exposed how the BBC dumbs down debate.

So I was on @bbcthisweek tonight. What a bizarre experience. Three dinosaurs teaming up on me, changing the subject every 10 seconds, saying inequality hasn't gone up since Thatcher.

As they say in academia: 'Science advances one funeral at a time.'

The show stops in July. https://t.co/ejWiN3npTX

“They all couldn’t care less”

Bregman is author of the book Utopia for Realists. Although Bregman himself supports capitalism, he does advocate several radical proposals to ‘save it’. These ideas include a 15-hour working week, universal basic income, and open borders. The BBC invited Bregman on to discuss these radical ideas. At least he thought so, anyway:

2. A bit more background on how incredibly stupid the show really is. First they invite you to talk about your book, and pretend to be really interested in your ideas.

4. Producer: ‘Yes, we want to get into that. But what do you think about Brexit?’

A couple of hours before the show, they want you to do a video of 2 minutes in which you have to summarise all your ideas. (‘And can you say something about Brexit please?’).

This phenomenon is why you commonly see the same pundits appearing on TV. These people may lack knowledge on the subject they’re discussing, but what little wisdom they do have they’re more than happy to share.

6. The show starts. They play the badly edited video, after which three right-wing dinosaurs – two of them politicians from the Stone Age – start teaming up on you. Clearly, not one of them has read a page of your book.

8. This was the worst experience I’ve had with UK media, but after quite a few interviews in different countries, I think I can say that, on average, British journalists are the least curious of all. So often, being ‘critical’ is just a pose.

The BBC often argues that its approach is impartial. What Bregman describes here is a situation in which ideas are discussed, but they’re not given room to breathe, and are actually muddied with misinformation. The BBC can point at this and say these topics were discussed; others could argue these ideas were shut down and danced around.

You can watch Bregman’s appearance on This Week here and make your own mind up:

Many people have claimed the BBC actually has obvious biases. This comes about from the organisation employing people from a narrow selection of experiences with a narrow range of political opinions. As the renowned scholar Noam Chomsky explained to the BBC‘s Andrew Marr:

Several people commented on the state of the UK media – the BBC in particular:

A reminder that the UK broadcast media, BBC included, is profoundly anti-intellectual and hostile to challenge, and that THIS IS NOT NORMAL. Even in the US, you can get much more intelligent engagement on TV, let alone in the rest of Europe. https://t.co/MyopdsI7fX

I hope we're now reaching the point where we all recognise that something needs to change at the BBC. https://t.co/LD9Mq2lzgl

Not surprising that the heavyweight complaints against the bbc today are coming from people outside the country. One of the most jarring things moving here was the titanic self-regard and tunnel vision of the (frankly, risible) media class. https://t.co/xxbZ8qoEQk

Bregman did have some positive things to say about the UK media, however:

10. The good news: there are new media in the UK filling the gap. Smartest questions (and best criticisms) I got this week were from Aaron Bastani of @novaramedia – a tiny startup with really smart, young journalists. https://t.co/k6xjf7Mkv0 [the end]

The BBC clearly struggles to engage with ideas outside its comfort zone. Different ideas are coming, though – the threats of climate change and failing capitalism require nothing less. As Bregman told Aaron Bastani in an interview for Novara Media:

So you can’t be a moderate; it’s the most irresponsible thing right now

The BBC shows why the term ‘moderate’ is a dirty word right now – because ‘moderation’ doesn’t appear to mean listening to different ideas; it means shutting them down to protect the status quo.