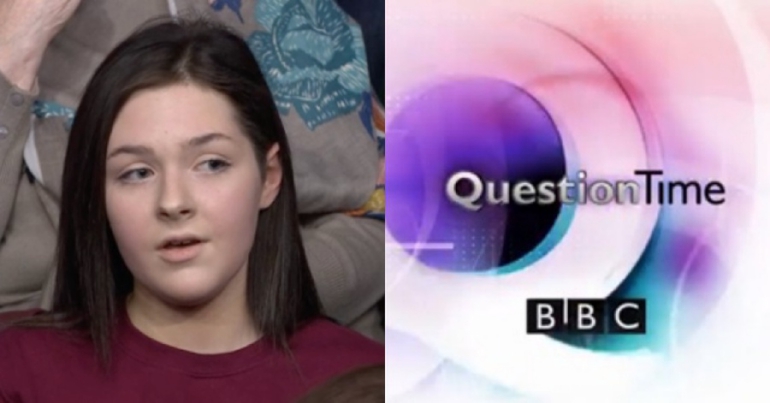 Theresa May and the government have pushed the UK even further into Brexit chaos. But on 21 March, young people spoke more eloquently about the situation on BBC‘s Question Time (BBCQT) than most politicians have for months, if not years. Their voices rang clear and true above politicians’ current noise and confusion.

This episode of BBCQT came from Belfast. One sixteen-year-old stood out. She said of the current mess:

This goes back much further… It goes back much further than any of you have said… to when the plans for the referendum were first announced… to David Cameron trying to negotiate in the EU. David Cameron made the referendum policy because he didn’t want to risk losing 10 or 15 seats to UKIP. And look where it’s got us. This has always been because of the Tory party playing party politics with issues that are going to be huge generational changes for all of us.

And she’s absolutely spot on. Even though May recently blamed everyone but herself for the chaos, we got here because of Conservative Party policy and infighting. And she didn’t stop there:

I’m sixteen years old. I didn’t get a say in Brexit and I won’t get a say in it because there is not going to be a second referendum, as things stand. But either way, I think what we have to face is that this is not an issue of parties not coming together… What we need to look at is the fact that this is all caused by a party putting itself first before the country it is trying to govern.

‘David Cameron made the referendum policy because he didn’t want to risk losing 10 or 15 seats to UKIP and look where it has got us’
This 16-year-old says the Conservative Party are responsible for Brexit. #bbcqt pic.twitter.com/JaylXz1XF2

Unlike many politicians, this young person also offered a clearly framed solution. She explained that what’s needed is not to “look back to a people’s vote” but to look forward to “a further extension”. And then she truly nailed it, saying that the solution comes:

From where it all should have started… by going back to a general election and representative democracy because that’s what this country was built on.

Many people celebrated her composure and clarity on social media:

Its about the only thing I am certain about, if it was a choice between the opinion of a group of 16 year olds or a some middle aged gammon, it's the 16 year olds everytime.

Still boycotting #BBCQT but well done to this intelligent and articulate person.

When they ask her one day what she’d say to her 16 year old self, she’ll say, “nothing really, nailed it”. https://t.co/66trzg6rRr

Many people also noted that she made “more sense than any politician in the past two years” and can “teach the government a thing or two”.

And she wasn’t the only young person speaking truth to power. Another audience member said that “the people clapping [for] no deal” in the audience “should be ashamed”. She also explained that:

The only people pushing for a second referendum are people who already voted for that in the first place… what’s changed? What we need instead is a general election… Let the parties put their policies back out there, tell them what their Brexit policy is.

The future is bright.

If like so many others you don’t watch #BBCQT you might just appreciate this contribution. We need a general election now. pic.twitter.com/R3aXXk1WNJ

Compared with the normal BBCQT fodder of bickering, self-important (apparent) adults, these young people were a breath of fresh air.

It should be mandatory that all audience members on #BBCQT be under 19.

Got more sense from them tonight, than we have had in the last twenty years.

May and other MPs ignore these young people at their peril because many people in the UK agree with them. And importantly, when this generation comes to power, they deserve more than an almighty mess to clear up: we owe them a future.

Featured images via BBC/Wikimedia and screengrab