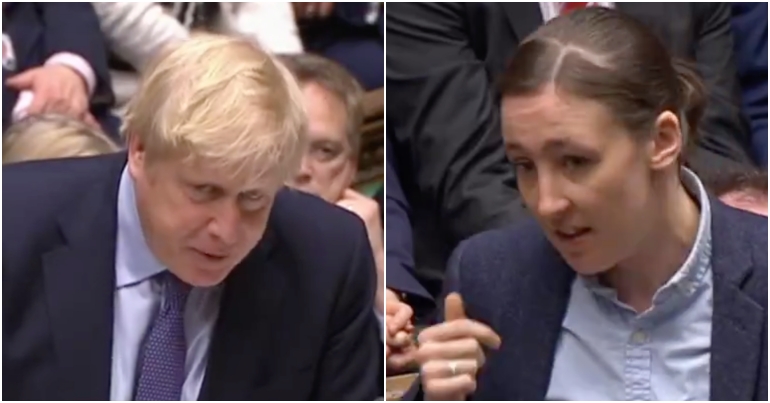 As The Canary has extensively documented, Universal Credit is one of the Department for Work and Pensions’ (DWP) most controversial benefits.

But while the government normally defends the benefit to the hilt, Boris Johnson made an extraordinary admission during Prime Minister’s Questions (PMQs) on 26 February. In response to a question from SNP MP Mhairi Black about whether one of her constituents had enough to live on, Johnson conceded:

The answer to her question, in a word, is no.

Black set out the circumstances her constituent is currently in:

I have a pregnant constituent with her due date in a couple of weeks. She is currently on Universal Credit. And after deductions, including an advance, she is left with a grand sum of £111 a month to feed herself, to heat her home and to prepare for her child…. But I want to ask him, in principle, as the prime minister, does he think that £111 a month is enough for anyone to live on?

She also said that she’d supply details of the case to Johnson, who agreed he’d look at it. Johnson initially responded to the question with the usual waffle about how the benefit is supposedly helping people. But in a weird diversion from normal practice at PMQs, when the PM doesn’t answer the actual question, Johnson did. And in doing so, he made an explosive admission that his government’s flagship benefit is failing people.

“As the prime minister, does he think £111 a month is enough for anyone to live on?”

The SNP’s Mhairi Black recalls the experience of a constituent who is pregnant and on universal credit – after deductions, she has £111 a month#PMQs https://t.co/EGVO0HHo01 pic.twitter.com/3dCvIXKoJa

As the Guardian‘s Kate Proctor tweeted, his response is an “incredible admission”:

Mhairi Black SNP #pmqs asks PM if he thinks her pregnant constituent, who has £111 a month to live on through the universal credit system, has enough to get by.
Johnson says "no"
Incredible admission of faults in the system.

And Full Fact pointed out that even his claim about the number of people the benefit has helped is “incorrect”. In fact, the 200,000 people Johnson claimed had been helped into work by Universal Credit represented “the government’s estimate of what Universal Credit would do by 2024/5”:

In #PMQs, Boris Johnson said that “In the round, Universal Credit has helped and is helping 200,000 people into work”. We’ve written about this figure before – including earlier this month, when he phrased the claim slightly differently: https://t.co/IqmnBdsNwB [1/2]

Not just an isolated case

This isn’t an isolated case. Universal Credit is causing misery for people up and down the country. As Steve Topple reported for The Canary on 24 February, in one town, two thirds of claimants are in rent arrears.

And it also says that foodbank use has increased in areas where the DWP has rolled out Universal Credit, with over 60% of people referred to foodbanks having had “problematic experiences with the benefit system”.

Given Johnson’s comment, it’s clear that even the government is admitting this horrendous system isn’t working. Any decent government would view this as an urgent reason why the benefit needs scrapping. Unfortunately, with Johnson in charge, this is very unlikely to happen.