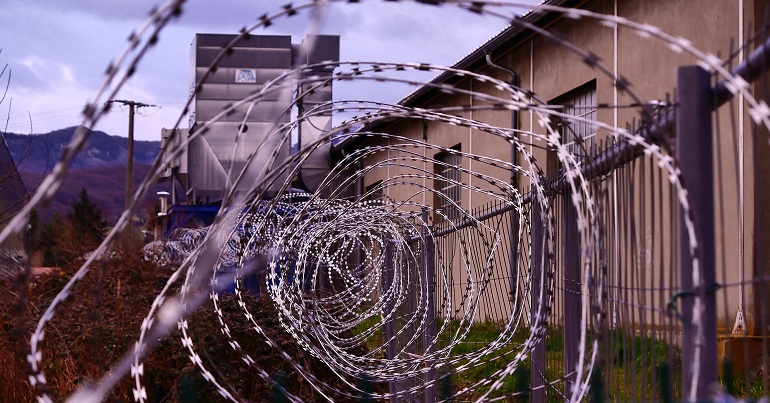 Allegations have emerged that a group of white officers assaulted a Black Muslim prisoner at HMP Full Sutton on Thursday 22 April.

A police complaint has been made after Dwayne Fulgence was left bleeding on the floor of his cell in HMP Full Sutton’s Segregation Unit. Fulgence was reportedly not given medical treatment for a considerable time after the attack. The Canary has been told he’s effectively been denied food since the attack.

This is the second complaint that The Canary has seen from inside HMP Full Sutton in two weeks. On 14 April, The Canary reported on allegations that conditions in the Full Sutton’s Segregation Unit were appalling.

The Canary has received the following account from inside Full Sutton.

Dwayne was assaulted by four prison officers at 2.25pm [on Thursday]. He is on ‘back wall unlock’.

‘Back wall unlock’ is where a prisoner has to stand facing the wall while four officers with riot shields enter the cell. The prisoner then has to walk backwards into the line of riot shields in order to be searched.

So when he was doing this ‘back wall unlock’, the officers told him to stand against the wall and then charged at him with their shields, smashed his face against the metal bars where the window is and then jumped on him, punching and kicking him. They dragged him out of the room by his arms.

There was blood everywhere. He had a busted lip and nose, as well as bruising to his face and blood all over him.

The prison officers left him on the floor and locked him in.

He’s a Black and Muslim man, and all the prison officers were white

The Canary was told that Fulgence was denied medical care for three hours after he was injured. One message we received said:

He’s been calling for a nurse, they haven’t got him a nurse

A later message said that a nurse did come to see Fulgence three hours after the incident:

Three hours after the attack a nurse did see him. The screws [prison officers] asked him to stand at the back wall again. He refused to do the [back wall unlock] again. So instead he had to sit on the bed with his legs flat out and his hands on his legs. And then [the officers] all came in with riot shields around him. And then the nurse came in and just shone a torch in his eye, and then didn’t do anything else, didn’t clean his wounds, didn’t answer his questions. When they walked away they turned off their bodycams and were laughing.

Fulgence reportedly asked for photographs to be taken of his injuries and of the blood in his cell but was refused. Later requests to see a nurse were also reportedly refused despite Fulgence vomiting and complaining of a severe headache. The Canary has been told that Fulgence is concerned that his ribs are broken.

No food since 22 April

The Canary saw another report on 26 April from inside Full Sutton. It said that Fulgence has not eaten since the attack on 22 April or seen a nurse again. Prison officers are reportedly insisting that Fulgence goes through the ‘back wall unlock’ procedure every time they enter his cell. Fulgence is not willing to go through the procedure again, and so he’s effectively being denied food and access to medical treatment.

The Canary was also told that his cell is still bloodstained and that staff are refusing to document the injuries he sustained from the incident on 22 April.

It’s not surprising that Fulgence and other prisoners are unwilling to comply with a protocol that involves walking backwards towards a line of prison officers armed with riot shields. The Canary has previously reported that another prisoner at Full Sutton who has Post Traumatic Stress Disorder (PTSD) found the experience extremely triggering.

The Canary received another report on Monday 26 April alleging that prison officers demanded to enter Fulgence’s cell to check whether there was any damage to the window. Fulgence was asked to comply with the same ‘back wall unlock’ procedure, but he refused and demanded the officers follow protocols correctly if they were going to use force to enter the cell. The officers response was to open the cell door, charge Fulgence with shields again, and drag him out of the cell.

The Canary asked the governor of HMP Full Sutton for a response. They passed us on to a Ministry of Justice spokesperson who denied the allegations but admitted that Fulgence had sustained injuries while being restrained by staff. He said:

This is untrue – staff were forced to restrain a prisoner for their own safety and a minor cut to his lip was checked over by healthcare staff.

The Ministry of Justice spokesperson also said the claim that Fulgence had been denied food was untrue.

Black people are much more likely to die in prison than any other group of people. A 2014 report by the Institute of Race Relations (IRR) shows that between 1991 and September 2014, 52% of the total number of people who died in custody in suspicious circumstances were Black, and that the majority of them died in prison. This figure shows that a massively disproportionate number of Black people died in prison. According to the IRR:

Some of the contributory factors to these deaths in custody were “force used”, “physical restraint” and “medical neglect”.

To give just one example of the racialised violence faced by People of Colour in prison, three prison officer from HMP Nottingham were found guilty of assaulting a Black Somalian prisoner. The court heard that the three officers had expressed racist attitudes over a WhatsApp group. The prosecutor in the case told the jury that the messages displayed:

Campaigners are calling for people to send letters of solidarity to Fulgence. The Anti-Carceral Solidarity Twitter account tweeted:

Dwayne is a Black Muslim man held captive in segregation, and was severely beaten by 4 white officiers in a racist attack.

Dwayne has been denied medical treatment. His applications to have photos taken of his injuries have been refused. #FuckHMP #BlackLivesMatter pic.twitter.com/ACm1qOHTbc

Demonstration at the Ministry of Justice

On Wednesday 28 April, a demonstration is planned in London at the Ministry of Justice in protest at the conditions that another prisoner – Kevan Thakrar – is being held in at Full Sutton. Prisoner Solidarity Network tweeted:

Prisons like HMP Full Sutton are places where violence and repression routinely go unseen and unheard. The prison system justifies its violence by demonising and dehumanising the prisoners it incarcerates, creating a narrative which allows it to act with impunity. Those of us who want to see a society based on collective care and transformative justice should always show solidarity with those experiencing the violence of the prison system and break the walls of silence between us and those trapped behind the prison bars.